For the longest of times, dim sum in Jackson has been out of the question. Sure you can get a random dish here and there, like a some har gao, pepper shrimp, and chicken feet at The Golden Dragon, but if you’re looking for a set dim sum menu; you’re out of luck. At least that was the case. Just a few weeks ago, Ding How reopened its doors at a new location on Old Canton road, and can you imagine my surprise when I read they would be serving dim sum?

I’m quick to give credit where it’s due. I was no culinary sleuth when I found this out; I actually read it on the site Asian in a Strange Land. Needless to say, he beat me to the punch. He and his family had their taste of Ding How’s dim sum on opening day. I had to settle for the second day, but I was still unsure of what to expect.

Being a chilly day, the first thing I asked for was hot tea. Imagine my surprise when the waitress told me I had a choice. 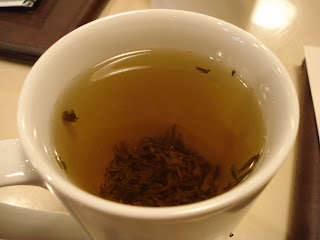 Looking for a good baseline reading, I went for the ubiquitous jasmine tea. It’s a little odd that I got a cup instead of a whole pot.

Moving forward, we were given a few complimentary snacks to start the meal. 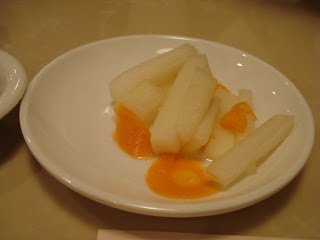 I’m pretty sure it was pickled daikon and carrots. Even it was a different veggie, it was still crispy and tasty. 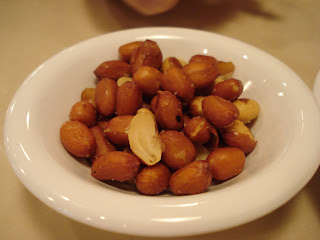 Peanuts are always nice to have, I guess.


Those are all well and good, but we came here for the dim sum, and I have to say that Ding How has quite the ambitious menu. With more than 30 items to choose from, they’re diving in headfirst. Even more ambitious is they have eschewed a Jackson favorite: the buffet. 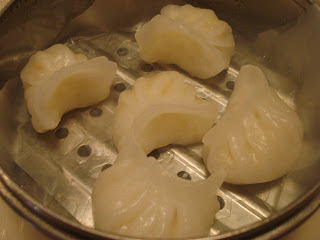 This dumplings had a very thick dough, a different approach from the almost transparent dough I’m used to. Inside there was a nice mixture of chopped shrimp and bamboo shoots. There wasn’t the whole shrimp that I’ve seen in other places, but it was still a tasty filling. These har gao weren’t a bad start to the meal.

Even though we had ordered a few items to start, the waitress would often bring a tray with a few extra options. One of those was the steamed jade dumplings (fey chui gau) 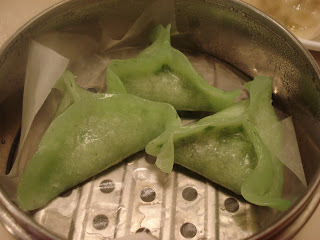 Again the dumpling skin was thick and doughy, not a trend I enjoy. Inside there was a lot of greenery, definitely fitting of the name. However, there weren’t very many shrimp. I think I’d pass on this one next time.

Continuing with extra items from the tray, I was interested in what looked like little pumpkin dumplings. 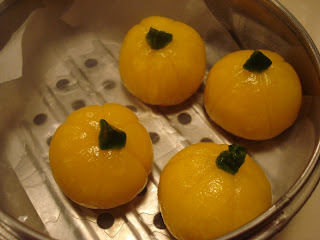 Described as a steamed pumpkin shaped cake stuffed with egg custard (man gua gau) these dessert cakes didn’t have any real sweetness to them. Also, I see or taste any custard to save my life. 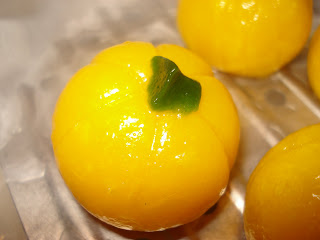 At the very least, they were pretty little cakes.

Siu mai has always been one of my favorite dim sum items. 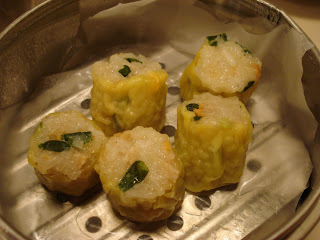 At Ding How, they’re steamed seafood and vegetable and completely disappointing. With an odd mealy and dry texture, these siu mai were lacking that greasy juiciness that I’ve come to expect from any pork, shrimp, or chicken sui mai.

One item off the menu was the soy paper wrapped fish. 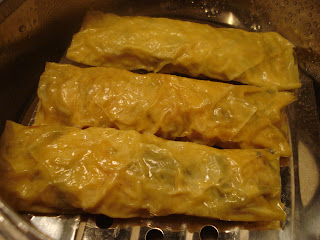 I often see these rolls labeled as seen juk guen and stuffed to the gills with an eggroll type stuffing or pork. These were not at all what I expected, but with a good flavor and a lot of crunch, it was a nice dish nevertheless.

I apologize for the terrible picture, but the waitresses were giving complimentary samples to every table and I had to pick one up and eat it right away. 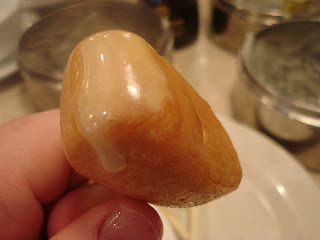 The deep fried golden milk bun (zha mam tao) seemed like a cross between a beignet and a donut. Fresh from the fryer and with a sugary sauce, this was a very good dish, but hard to handle. 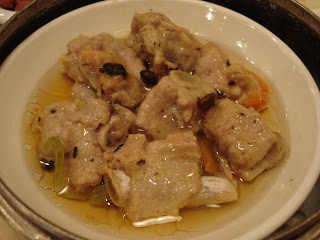 These pie guaw were incredibly lean and were lacking in chili and black bean. Even with visible black beans, there was just something missing from this dish.

One of the best dishes at Ding How is one of the simplest. 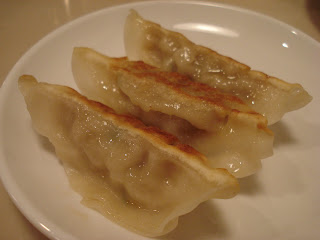 The pan fried dumpling with pork and vegetable (jim gau) had a good porky flavor that was perfectly complimented by the house chili sauce.

Another home run was the pan fried flat dumpling with chive and shrimps. (gao choi ben) 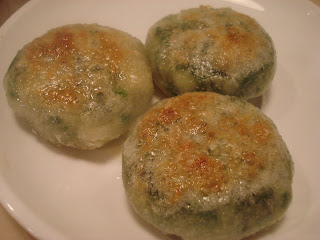 This is really what I was hoping for. Perfectly fried and with the right ratio of chives to shrimp, these really were superb dumplings. I would actually go back just for this dumpling.

When I ordered the stuffed bell peppers, I had certain expectations. I expected a minced shrimp filling, pan fried, and with a sauce on top. 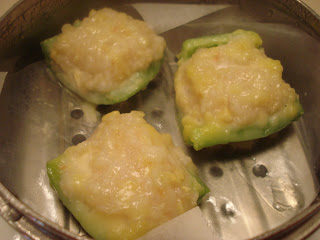 This was just their ha-gau filling stuffed into a slice of bell pepper. I’ll admit the bell pepper was nice and crispy, but this was just a poor dish.

The stuffed eggplant suffered much the same fate. 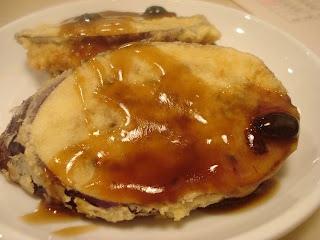 Yes, the eggplant itself was moist inside, crunchy outside and very tasty, but it was just more ha-gau filling on the inside. At least the sauce was there. This was the sauce I was expecting on the bell pepper.

One thing I discovered from this meal is that coconut milk in a white bowl will not photograph well. 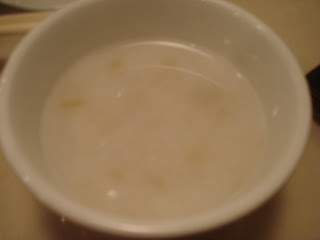 I tried this photo about 12 ways, but they each came out the same. However the mango tapioca dessert was nice and refreshing. The contrast of tapioca pearls and crunchy mango is always a treat.

I couldn’t bring myself to leave until I had tried the chicken feet (fung jeow). 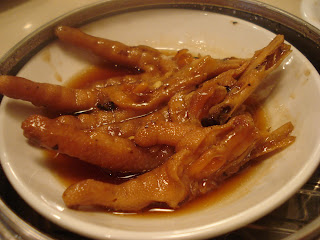 What’s the first thing you notice? That’s right, the chicken feet haven’t been fried before steaming. I asked why they had taken this approach and the waitress told me they were going for a healthier approach. This sparked a conversation. Outside of the frying, are chicken feet bad for you? Anyway, these steamed chicken feet took a little getting used to, but they weren’t too shabby. The sauce was a little sweet, and while I still prefer the fried + steamed method, these were pretty fair examples of the dish.

So what did I walk away with? Will these spark a trend towards more authentic Chinese cuisine in the Jackson area? Not likely. Will the Ding How loyal feel betrayed with the lack of a buffet. Maybe, I did see a few people stop in and greet the staff like old friends, but when they were actually seated, they looked a little disappointed. The family with 3 kids and a baby looked especially displeased in the lack of steamer trays full of food. However, the meal was made memorable by a couple of ladies asking what dim sum is. The waitress explained it was small dish with mostly dumplings, and then pointed to me as an example of someone eating dim sum. Wouldn’t you know at that exact moment I had a chicken foot in my mouth.

Anyway, I’ll be blunt and say that the dim sum at Ding How needs work, but then again I’m comparing it to much more established cities like Atlanta, Houston, New York, etc. For only their second day in a city that’s never had a true dim sum restaurant, it was an outstanding effort. The staff couldn’t have been more attentive and helpful, and it’s always interesting to see different interpretations of dish. Hopefully a few of the kinks will be worked out the next time I go, but kudos to Ding How for being brave.

Thank you so much to point out that our work needs more improvement, and we will try to make it better. After the grand opening, we will have the dim sum in the cart, so the customer can see it, and order from the cart. And we are adding more choice to the dim sum menu since the opening. And we have adding more Chinese traditional home cooking flavors to the chef special menu, featuring all different hot spicy dishes. Since we are still new to the cooking style in our self, we are sorry that make you disappoint. We are hopefully that you can try us out and give commons again.