Without Frank Brigtsen, I would have no idea that Dante’s Kitchen existed. How? It’s as simple as location. When I started going to Brigtsen’s, I couldn’t help but notice the restaurant across the street, Dante’s Kitchen. Naturally, I decided to do a little research and found nothing but glowing reviews. So, Dante’s Kitchen quickly went on my list of places to try in .

Fast forward to a cold, rainy December night, Jon, Liz, and I were trying to decide something for dinner. With a few clicks on my phone, we had reservations at Dante’s Kitchen.

Once we arrived and we seated, the three of us began the arduous task of picking out dinner. With a locally sourced and captivating menu, it’s hard to narrow down the selection.

Even though we were still deciding, our first course arrived. 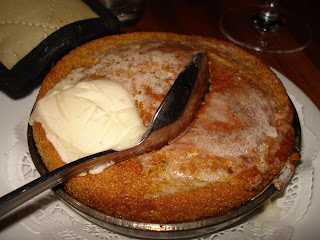 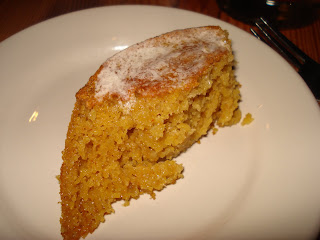 Each bite was warm, rich, and simply delicious. It didn’t hurt that each piece was dripping with honey butter.

I don’t remember who ordered it, but it’s hard to turn down shrimp and grits, especially when it’s grilled shrimp and stone ground grits with an andouille red eye gravy. 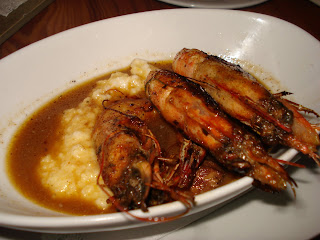 The shrimp were plump, juicy, and very well seasoned, not to mention, quite large. However, if you were able to get a little bit of shrimp, grits and gravy on your fork, you were in a real treat. I know it’s a small detail of the dish, but I was happy to see chunks of andouille in the gravy.

It was a forgone conclusion. As soon as I saw charcuterie plate on the menu, I knew one would be coming to our table. 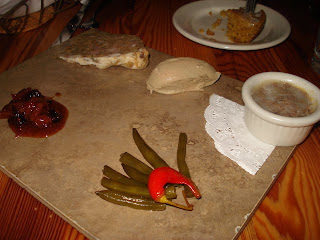 Featuring a pork terrine, duck liver mousse, and a duck rillette, this was going to be an introduction to some new foods for one of our party. The rillette was very smooth and fully of those meaty duck flavor. Working left, the duck liver mousse was next. Like the rillette, this was a very good dish, but I don’t think Liz appreciated the heavy iron taste. Last was the terrine, and this was the most plain Jane of the three. There wasn’t anything exceptional to the dish, but it was solid choice. Together the three items made a very nice charcuterie plate, but relatively plain one.

With our appetizers finished, we were able to appreciate the neighborhood atmosphere of Dante’s Kitchen. I love how so many restaurants in Nola are converted shotguns. However, it wasn’t long before we were enjoying our entrees.

The next dish seems incredibly out of place for December, but we had a tomato sample plate. 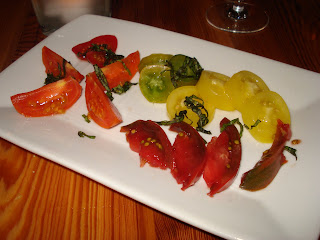 Served with 3 kinds of sea salt (Hawaiian red, fleur de sel, and chardonnay), we were told these tomatoes had been picked morning. It was a little annoying that the waiter couldn’t tell us all the varieties, but the green were supposedly zebra and the yellow were called lemon bombs. Regardless of the name, each tomato was bursting with flavor, and it was a treat to see how each tomatoe paired with the three sea salts.

Even though we had the plate of tomatoes, I thought it wouldn’t hurt to order something else from the Perique Farms vegetable part of the menu. 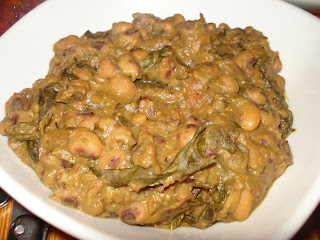 I wasn’t sure what to except with the black tuscan kale with black eyed peas and Italian sausage, but this doesn’t look too appetizing. However, don’t let its looks fool you. The black eyed peas were a little mushy, and the kale was lost in the fray. At least there was plenty of Italian sausage, it seemed like every bite I took was full of spicy sausage.

It had taken a fair amount of deliberation, but I had decided on the duck pot pie for my appetizer. Described as a seared confit duck leg, ratatouille, and buttermilk biscuit crust, I was very excited for the dish. Once the dish actually arrived, I couldn’t help but laugh. 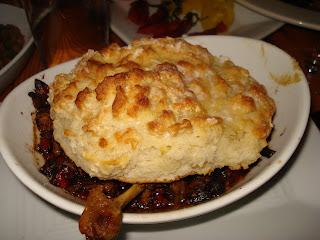 I love that the buttermilk biscuit crust is a giant biscuit, and a tasty one too. Well buttered and delicious, the biscuit was just too big to enjoy. 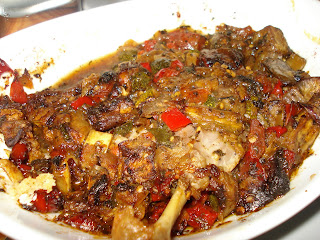 Underneath was the duck and ratatouille. Since I think of ratatouille as a summer dish, I was a little worried about this December version, but it was heavy, spicy and perfect for the cold, damp night. The duck was no slouch either. Well spiced and smooth from the confit process, the duck and ratatouille was a match made in heaven. Outside of the absurdly sized biscuit, the only downside to this dish was that it came at the end of the meal. I was too full to enjoy it all.

While waiting for our check, we discussed Dante’s Kitchen and its cross-street (rival? Companion?) neighbor Brigtsen’s. Jon and Liz had both enjoyed Dante’s Kitchen, even though there were a few longs lulls between visits from our waiter. I, too, thought Dante’s Kitchen was exceptional and another one of them gems. However, if I were forced to choose between Brigtsen’s and Dante’s Kitchen…….I couldn’t. Obviously I need to do some more research. That means more trips to Dante Street for me.