You never know what you’ll find in the depths of your freezer. While I was cleaning out my garage freezer, I found the last brisket from my summer order of Flying M Farm beef. Knowing this was a relatively small brisket, chili or bbq was out of the question, so I decided to take a look at my ever growing collection of cookbooks. After thumbing through a few, I stopped on Fuschia Dunlop’s “Revolutionary Chinese Cookbook” and went to the index. There weren’t too many beef centered recipes but there was one that caught my eye: Slow-Braised Beef with Potatoes or tu dou wei niu rou. With almost of the ingredients on hand, I started in on another Dunlop masterpiece.

After preheating my oven to 300, I started with the beef. 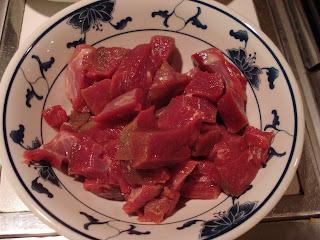 I told you that it was a small brisket. Once it was trimmed and cut into bite size chunks, there’s not a whole lot there. 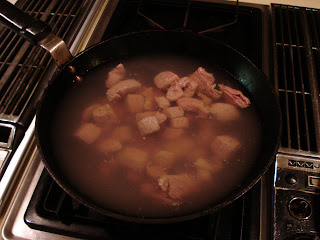 Next the beef is blanched in boiling water 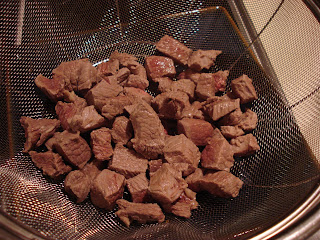 Drained and then set aside. I’m still not sure what the point of this step was. It seems like the beef would have done better to be seared than blanched.

With the blanched beef off to the side, I got the rest of my ingredients ready. 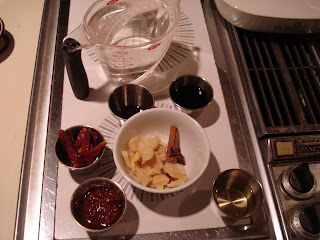 The 3 tbsp of peanut oil went into my wok over medium heat. 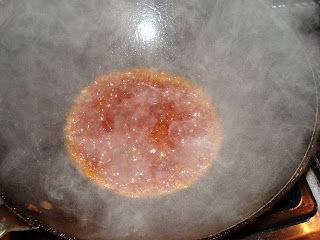 The chili bean paste went in next and the idea was to stir fry until it was red and richly fragrant, but judging from the smoke, I had my wok a little too hot. 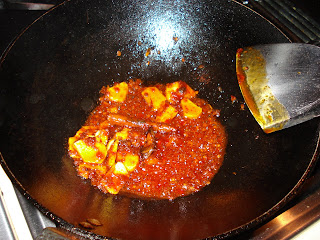 Since the bean paste was fragrant, in went the ginger, cinnamon, and star anise. 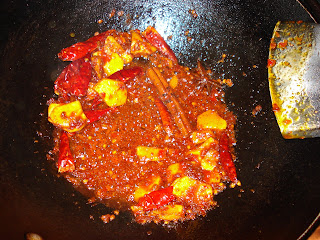 After that came the dried chilies and everything was stirred a few times. 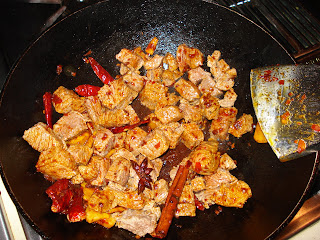 The beef was next into the wok and everything was stir-fried for a few minutes. 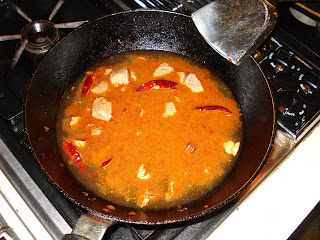 Next into the wok was the 2 ½ cups of water. 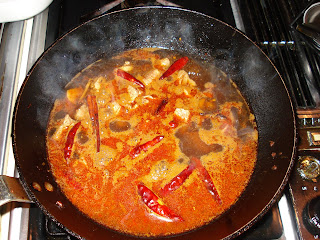 Once that all came to a boil, the soy sauces and vinegar were all added to the mix. 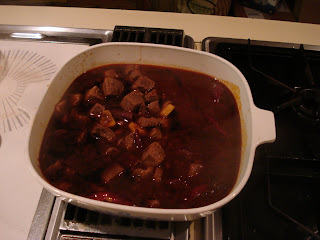 Now it was time for the oven. Everything from the wok was poured into a casserole dish and popped into the 300 degree oven for 1 1/2 hours.

After an hour or so, I started in on the next step. 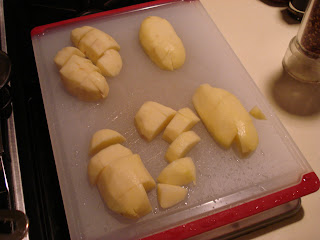 One pound of potatoes are peeled and cut into chunks. 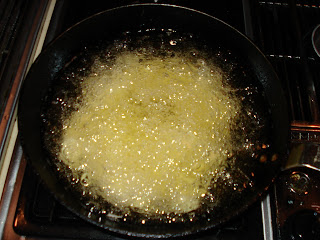 Then fried in peanut oil until golden. 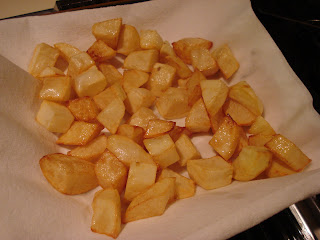 I’d say those are golden potatoes.

Once the 1 ½ hours was up, I pulled the casserole from the oven. 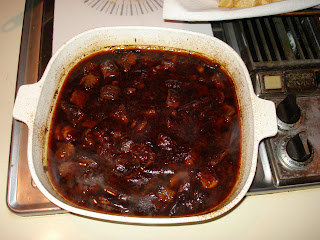 I wasn’t really sure what to expect, but it certainly looked interesting. 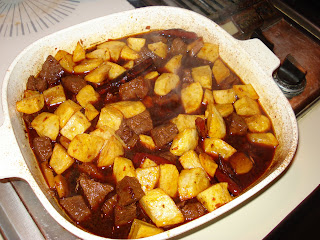 The fried potatoes were added to the stew and then everything was put back in the oven for another hour. 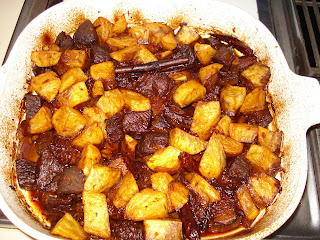 After 40 or so minutes, I got impatient and pulled the casserole out of the oven. It’s a good thing I did or there wouldn’t have been any liquid left. 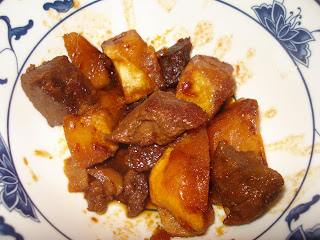 The meat was achingly tender, but what surprised me was the heat level. At first it seemed a little mild, but with each subsequent bite, the heat level grew. 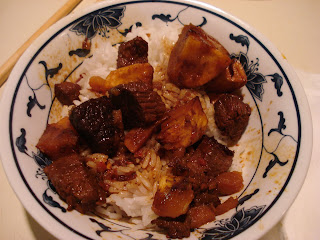 Of course, this meal could only be made better by adding rice to the equation. I suppose this is the closest thing to Chinese beef and potatoes stew. It’s certainly not something you would encounter in everyday Chinese cuisine. While this was a tasty meal, it was achingly slow to finish and I’m not too sure if I would make it again. Oh well, there’s still plenty to try from the two Dunlop cookbooks.

The blanching of the beef is to get rid of the "peculiar smells", what they call yi wei.

According to Fuchsia's other book, the Chinese traditionally don't like blood or other impurities in their meat, so they blanche the beef first. It this originates from the use of the cuts of beef that may not be the most choice, a cleanliness kind of thing.

My chinese friend does something similar to this but he uses "chinese style 5 spice" for most of the seasoning and doesn't mess around with the oven, he cooks it all on the stove top. It's amazing every time. I would also suggest serving it with spicy fried cabbage to take a little of the edge off of the beef potatoes.