It’s time to revisit a couple of old favorites; first is the roast chicken. Second is Pim Techamuanvivit and her website Chez Pim. However, times have changed, Pim T. has released a book called “The Foodie Handbook: The (Almost) Definitive Guide to Gastronomy”. In this book, Pim covers all the major parts of being a foodie, even if that is now a pejorative term to some. First is “How to eat like a Foodie”, then “How to cook like a foodie”, “How to drink like a foodie”, and lastly “How to be a fabulous foodie”. With this post, I’m focusing on a few pages from the “How to cook like a foodie” section.

Of course, the key to a successful roast chicken is a good bird. 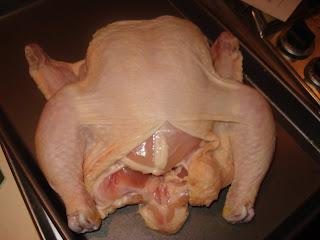 I decided to use one of the Empire Kosher birds I had in the freezer. That bird has no shame.

Before continuing to the all important butter, I made sure to preheat the oven to 425. Now, with that done, I can move to three tablespoons of softened butter. 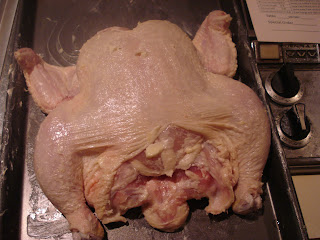 Pim is very emphatic about massaging the butter into the bird. After I thought the bird was completely buttered up, I followed Pim’s instructions and liberally salted the bird inside and out. I actually thought I might have gone too far, but Pim writes “When in doubt, throw in a little more.” Of before I could forget, I gave the bird a good dose of pepper too.

Moving onto the stuffing, Pim leaves the door open for interpretation: “Whatever you have on hand that can lend some good flavors, just use them.” 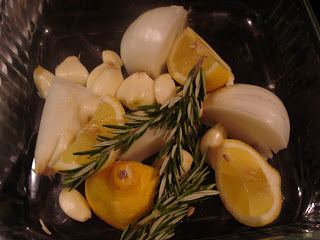 It just so happened that I had an onion, some garlic, rosemary and lemon. I followed Pim’s advice and quartered the onion and the lemon for good measure. Also, twenty cloves of garlic never hurt anyone, did it?

I’ll skip the part about how I trussed the bird. 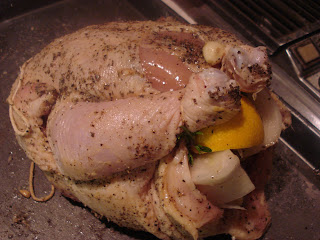 The solution really is simple; just google it and there are videos aplenty.

What really sets Pim’s method apart from so many others is how the bird is cooked. 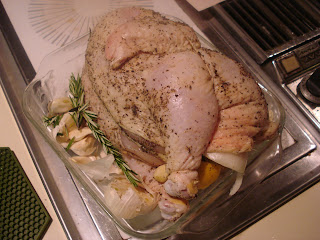 After I rubbed the roasting pan with butter, I added the chicken neck, some rosemary and a few bulbs of garlic cut in half. Now the bird is placed in the pan on its side. It’s done for 30 minutes on one thigh, flipped for another 30 minutes on the other side, and then the last 20 minutes are done with the breast up. The idea is that the thighs cook first and leave the breast to be cooked last.

Fast forward an hour and 20 minutes, and I had a done looking bird. After piercing the thigh and seeing clear juices, I pulled the bird from the oven. The second thing that sets Pim’s recipe apart from the others is how the bird is rested. 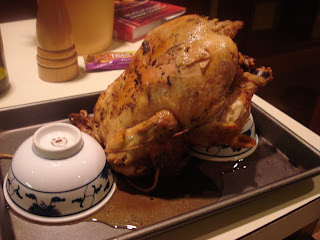 With the bird positioned with its ass in the air, the hope is that all the juices run down to the breast meat. I was a little concerned with just how big the puddle of juices was on the platter

Since the bird needed about 10 minutes to rest, I could tackle the roasting pan. 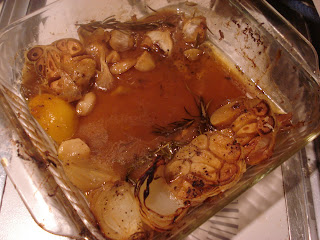 The garlic was simple, I took that out and squeezed out all the delightfully roasted cloves. The rest I threw away. 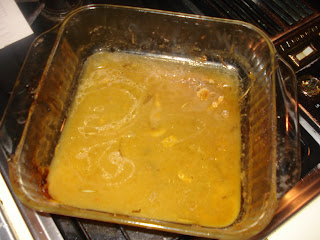 Still working with Pim’s recipe, I put the pan over medium heat and picked a deglazing liquid. I was intrigued with the idea of using vermouth, but the results were not what I really expected. 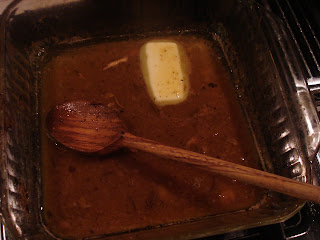 Nevertheless, I watered down the vermouth and after adjusting with salt and pepper was pretty happy. Of course, it never hurts to add a little butter at the end.

Here’s the bird after resting. 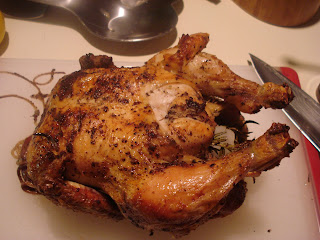 I think most will agree, it’s a very tasty looking fowl. 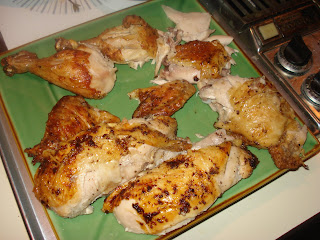 After a little carving, I had a whole plate of roast chicken. 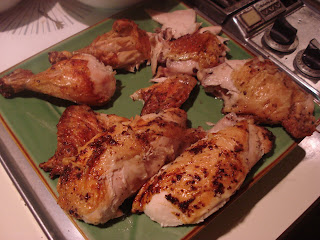 What were the results? Yes, this was a deliciously moist chicken. The first bite of the breast meat was fantastic. However, after a few more, I noticed that I was still stuck with slightly white meat. Thankfully, this was quickly covered up with some rich pan sauce.


Would I go as far as to call this the best chicken I’ve made so far? No, that would be ridiculous. There are too many ways to make a roast chicken and I have it in my mind that each one needs to be tried. Still, with a few more tries at this one, I’m sure it will be another go to method. Congratulations to Pim Techamuanvivit for an enthralling book and a stellar site.

A technique that I have recently heard of that sounds neat is to stuff some softened butter under the skin. Apparently this helps in the crisp factor. Good looking chicken. Where did you get the kosher bird?

p.a.'s i'm assuming. Where can I find some fresh pork belly around here?