One of my favorite things about the Chinese cuisine in Atlanta is its sheer randomness. Today, Mr. Favorite chef is at x location, tomorrow he’s struck out for greener pastures at y location. It doesn’t seem to matter that y location is just down the street from x. So on a cold November night, I was on the way to Chef Liu and looking for a shack. Why a shack? Because the Blissful Glutton describes Chef Liu’s location as a shack on Buford Highway.

Maybe in the future, I should look for directions more current than 2005. With address in hand, I thought I’d passed it and pulled into a later mall entrance. Wouldn’t you know it? I happened to pull right in front of the current location. No longer a shack, Chef Liu is now next to a wholesale bling store. On a side note, I really want to know what’s inside that store.

Once inside, I was seated and immediately ordered a leek pie. 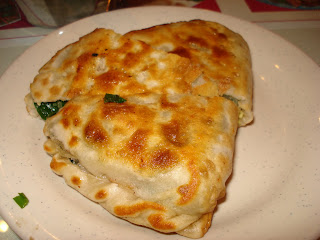 Sure it looks unassuming, but it’s literally overflowing. 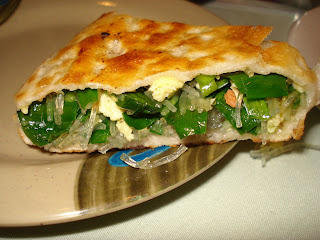 There’s a lot of noodles, chicken, egg and leek in this pie and each slice is hard to handle. Tasty on its own but better with chili sauce, this leek pie had a huge downfall. As soon as I went in for a dip, it fell to pieces, not the most user friendly dish.

Moving forward, there was soon an order of Shanghai juicy steamed pork buns at the table. 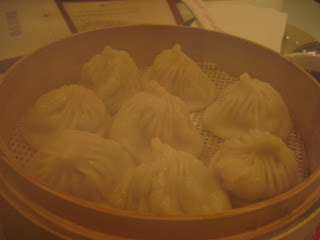 True to their word, they were steamy. 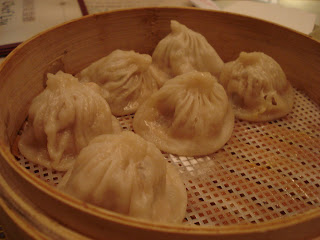 A later picture shows them in their semi-deflated glory. 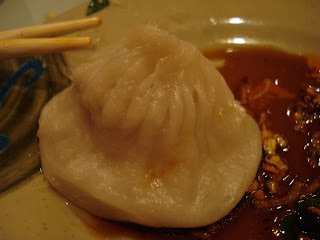 With an amazingly thick dough, I wasn’t prepared for these to be soup dumplings, but there was a nice bite of broth and a tasty pork inside. Unfortunately, there wasn’t as much broth as there should have been. Each dumpling would stick to the basket and inevitably lose most of its broth. At the end, there was a substantial pool of broth underneath the basket.

Inevitably, I was drawn to one of the few dishes labeled spicy, the hot & spicy sauce cool noodle. 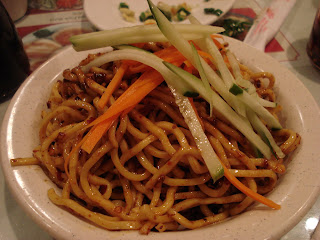 Yes, they were a little spicy with a very pleasant sesame taste, and for cold noodles they were pretty good. Still, I wish this dish had been served hot.

Ironically, the only dish I ordered from the cold dish section of the menu arrived warm. 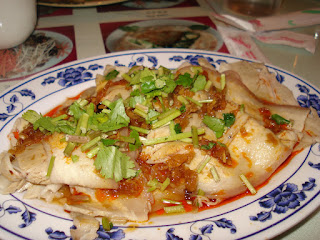 I couldn’t help myself when I read garlic spiced bacon meat. This might have been my favorite. Each slice was fatty & tender with plenty of garlic and cilantro. Even with lots of fat and a sauce on the plate, I was surprised that each piece was a little dry. Dry meat or no, the garlicky bacon was worth ordering.

More dumplings is always a good decision and the waiter recommended the vegetable with pork dumpling. 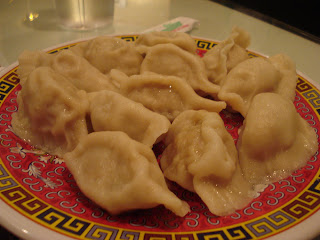 Again, the dumplings arrived with a very thick dough, and again the pork inside was juicy and rich. Nothing spectacular, but these were still very good dumplings.

Lastly it was more pork, but this time in the form of pan fried pork buns. 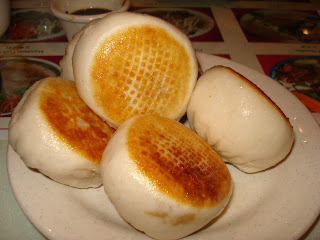 I’m so used to steamed pork buns that I was a little enamored with this pan fried example. 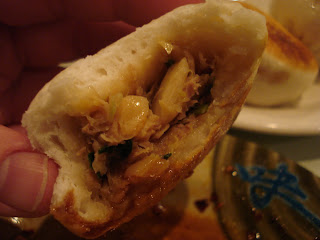 What really caught me off guard was the filling. Instead of the usual Chinese bbq pork, there was garlic & onion roast pork instead. Not to say this wasn’t a tasty filling, just very different from what I was expecting.

By the end of the meal, it was no secret that the wait staff was ready to close up shop. So, after paying the enormous bill of 30 dollars, I begrudgingly went outside to the cold. Overall, I thought this was a pretty superb dinner. True, the soup dumplings did have a tendency to lose all their broth and the bacon was dry, but the flavors were spot on. I’m hoping to make it back to Chef Liu, if only to see what their breakfast is like. I’ve never heard of spicy lamb kabob from breakfast but it sounds like it’s worth an early morning.

Viagra Online Without Prescription said...
This comment has been removed by a blog administrator.
August 30, 2010 at 12:55 PM

one of my favorite things about Chinese cuisine is they cook everything so tasty with its own curries and with passion its condiments making a good taste for us. Buy Viagra Viagra