You know things are changing in Jackson when you can get two different tripe tacos within a mile of each other. Whether you appreciate that or not, there’s a new face for Latino cuisine in Jackson and it comes in the form of a Mexican and Columbian bakery & deli named Omonia on County Line Road.

I do my best to give credit where credit is due; I’ve driven past Omonia for a number of weeks and never noticed it was there. It took a new Jackson blogger, Carpe Jackson, to point it out. I’m not sure who’s behind Carpe Jackson, but they are doing their best to find what’s different in Jackson.

After reading about their impressions of Omonia

I decided to go see for myself. If you’re like me, you’re really hung up on the name Omonia. Maybe I’m mispronouncing it, but it just sounds so much like ammonia, not the best mental image when you’re trying something new.

Word similarities aside, there’s no doubt that Omonia’s shop was once a Quizno’s. There’s still a Quizno’s counter, wallpaper and sign. However, the pastries are distinctly non-Quizno’s. 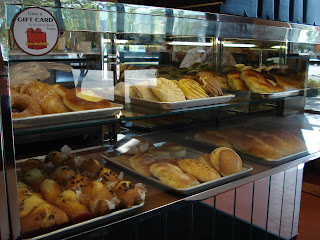 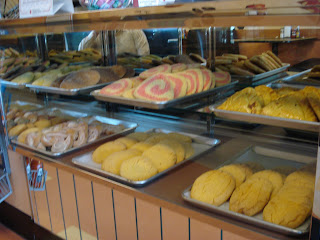 More on that later.

Initially I was disappointed in the menu. It seemed like you could only order 3 tacos as a time, but after a few quick questions, I put in an order for one of every taco. Initially that meant a steak taco, chicken, pork loin, brisket, marinated pork, ox tripe, and tongue. No matter how you slice it, that’s a lot of tacos. Unfortunately, they were out of tongue that day.

While I was waiting for each taco to be made to order, I enjoyed a delicious beverage. 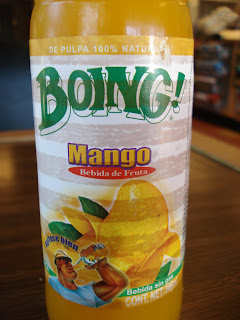 I first had this at Taqueria la Guadalupe, and the name is still a little ridiculous, but it’s addictive. 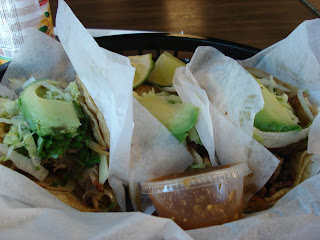 The first three were the simple tacos: beef, chicken, and pork tenderloin. I realize they all look alike from the picture, but every taco came dressed with lettuce, onions, cilantro, and a fresh slice of avocado.

Working from right to left, the steak taco was first. 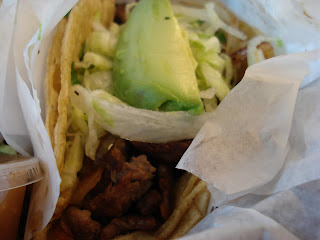 This was a great taco, especially since it was fresh off the griddle. The grilled onions really complimented the steak. By itself, the steak had a very beefy flavor. Don’t laugh, I’ve often found that low quality steak has no real beef flavor. 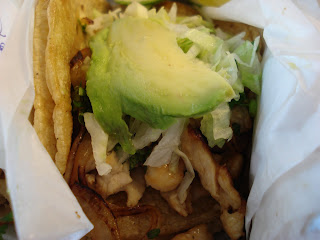 Chicken was up next, and on its own, the meat was very plain. Even when I added the house salsa, it was still a bland and underwhelming taco. 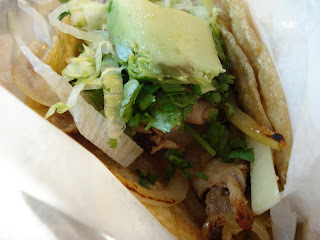 The last taco from the first batch was the pork tenderloin and there was a good porky flavor to this one. After adding some house salsa, I noticed just how well the salsa and cilantro worked with the pork.

Before I could finish the first trio of tacos, the second one was on the way. 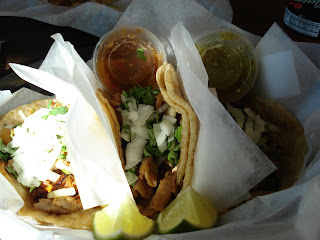 Apparently I have a hard time taking good pictures of tacos, but from left to right, there is a marinated pork taco, tripe, and lastly, brisket.

Again, working from right to left, I started with the brisket taco. 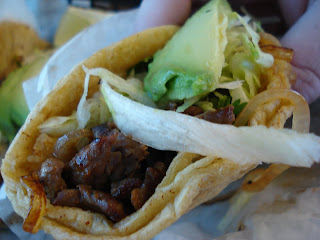 By itself, the brisket is tender but a little on the dry side. There is a nice saltiness to the beef, but even with salsa, this makes for a dry but beefy taco. 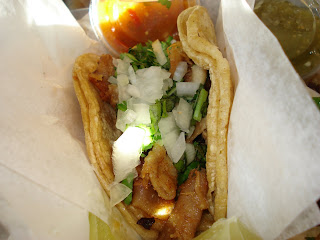 The tripe taco is always an interesting option. On its own, the tripe is peppery at first, but has a very odd, floury finish. It has that great chewiness balanced with an initial crispiness. Tripe is a very nice taco option. 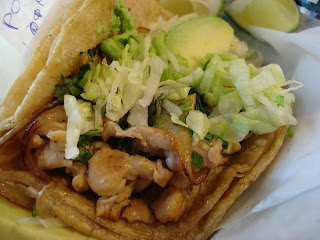 Lastly was the marinated pork taco. Solo, the marinated pork is much better than the already good pork tenderloin taco. I couldn’t help but think that the pork tasted like it was marinated in Worcestershire sauce, but the man behind the counter told me it had been marinated in pineapple. I wasn’t a fan of the few raw onions on this taco, but this was by far my favorite.

After eating far too many tacos, I went to pay for my tab. I asked what happened to the tongue taco, and was quickly informed they were out of fresh tongue. I’m glad to see they try to use fresh ingredients, but I was very intrigued when they told me there would soon be brain tacos. Of course, I couldn’t leave without taking a few pastries with me. 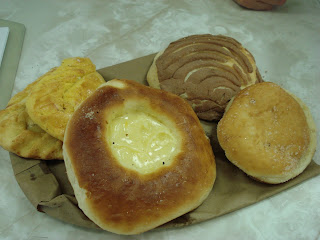 The empanadas at the top left were very doughy, but there was a nice pineapple filling. My favorite was the fried custard on the bottom right. There are proper names to these pastries, but I have no idea what they are. Either way, it was a pretty favorable first trip to Omonia. I’m still not sure what part of their menu is representative of Columbian cuisine, but I’m sure I’ll find out soon enough.