With the eggplant being less than spectacular, but the banana peppers top notch, I decided to move onto my first meat recipe from Michael Ruhlman & Brian Polcyn’s “Charcuterie”. As much as I wanted to delve headfirst into the world of cold smoked meats and sausages, I decided to start relatively small with a corned beef.

I’ve been meaning to try out their corned beef recipe for quite some time, but there was one hurdle, sodium nitrate or salt peter. I had originally planned to try Alton Brown’s recipe, but I couldn’t find salt peter anywhere in Jackson. Ruhlman & Polcyn’s recipe actually called for pink salt, and they were kind enough to list suppliers in the back of their book. After ordering some instacure #1 & #2 from the Sausage Maker in Buffalo, I was finally ready to make my own corned beef.

Like everything in their “Recipes for Salt-Cured Food” section, this recipe starts with a large helping of salt. 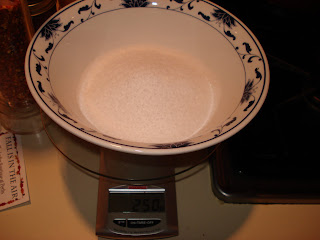 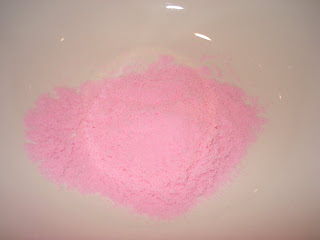 Next came 25 grams of pink salt or instacure #1, and it really is that shockingly pink. 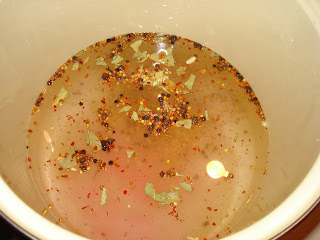 In a large pot, the gallon of water, 450 gram of kosher salt, and 25 grams of pink salt were combined with 100 grams of sugar, 3 minced cloves of garlic, and 20 grams of pickling spice. 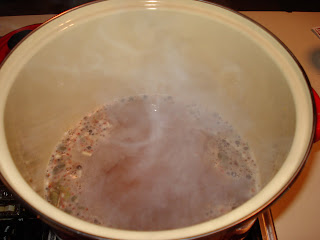 It was all brought to a simmer and then cooled to room temperature and then refrigerated.

The recipe actually calls for the 5 pound brisket to be brined in the pot. I decided to stray from that idea. 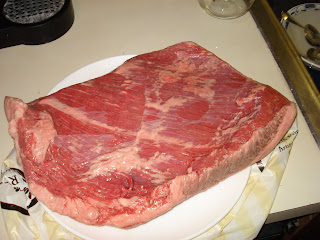 Another fine cut of meat from Paul Anthony’s. 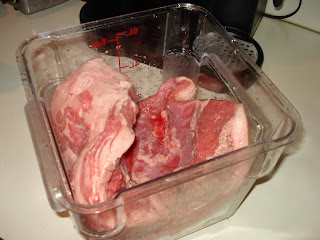 It may look a little odd, but it works. 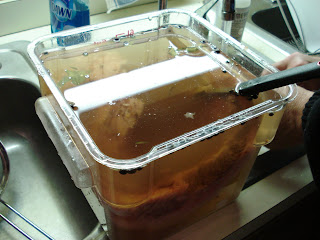 Everything looks covered with brine. 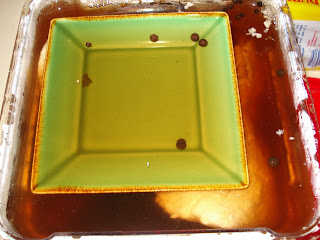 However, a plate on top is cheap security. Everything went in the fridge for 5 days.

Five days later, I was ready to see how things looked. 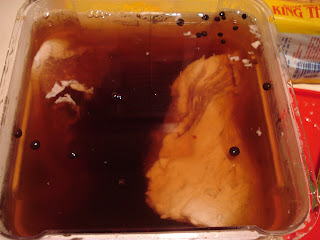 It doesn’t look too good at this stage. 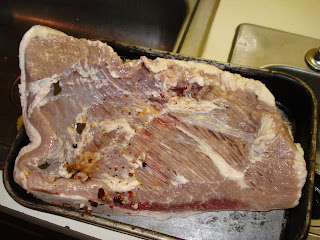 Once the brisket was out in the open, you can really tell how much the brine has changed the color of the brisket. 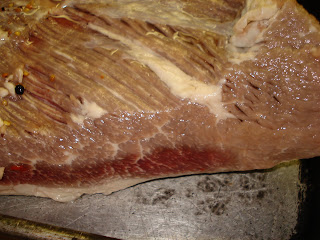 Although I was a little worried about that blatantly red streak. 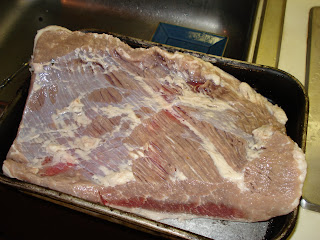 The brisket was rinsed under cool water and I was ready to move forward.

As soon as I figured out which pot would comfortably hold the brisket, I put it inside and then added enough water to cover. 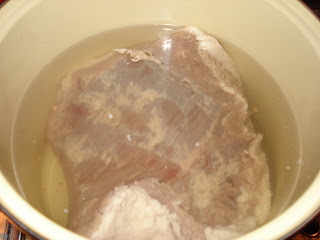 Next came the last ingredient. 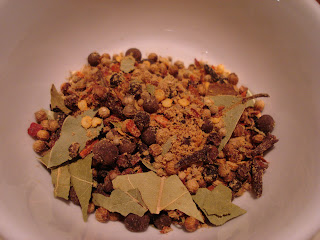 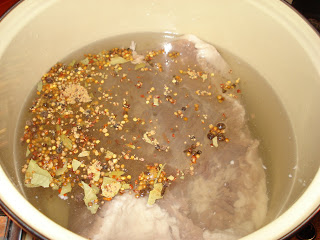 With the pickling spice in the pot, I brought everything to a boil, reduced the heat and simmered it for 3 or so hours. I think I actually pulled the brisket out after 2 ½ hours. At that point, it was perfectly fork tender.

Now that the cooking was done, I took a step back to look at my work> Even without the flash, you can tell that the corned beef has that wonderful pink color. 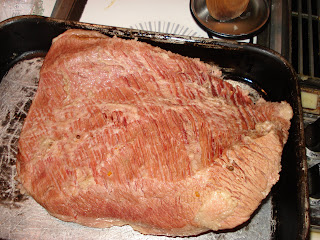 With the flash, it’s only that much pinker.

Sure, I could use a large knife to carve this brisket, but this was the perfect time to use my meat slicer. 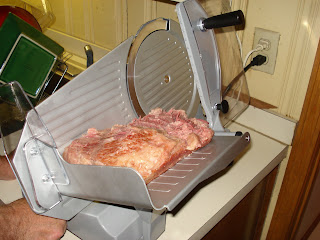 It took a minute to set everything right. 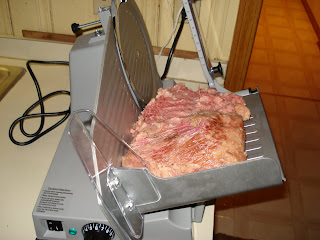 I guessed that 6 would be the right setting. 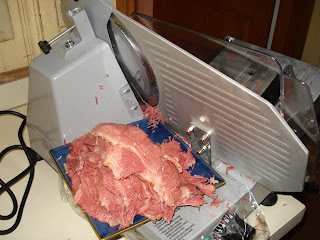 After I started slicing, I realized this would be messy as hell, but look at the beautiful corned beef. 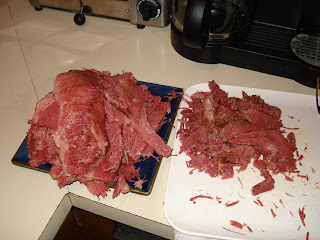 In the end, it was a little depressing that all that time had made a pile that small. However, once I tasted that hot corned beef, I knew it was completely worth it.

So, I’ve had mixed results with Ruhlman & Polcyn’s vegetable recipes, but grand success with my first try at one of their meat recipes. Seeing as the book is named charcuterie, I have that meat is more of their forte. I have a feeling I’ll be revisiting this book a number of times, especially with cooler weather outside.

how big cut of meat is this, I am so happy to see this wonderful piece of meat, it is to light the grill and make right now. Buy Viagra Viagra