I think it was my freshman year of college. I was home for either Thanksgiving or Christmas and my buddy Michael and I were looking for something to do. I had been told there was a new 24 hour Mediterranean place in Fondren. Seeing as anything that’s open 24 hours a day and isn’t a Waffle House is a novelty, Michael and I went to investigate.

Inside was a counter in front of the kitchen and a few tables and chairs. Calling it sparsely decorated might be an understatement. I really don’t remember much about the gyro from that night, but I couldn’t help but think a 24 hour gyro stand wouldn’t work in . Fast forward a few years and the Aladdin I first knew has undergone a significant transformation. Now there are more than just a few haphazardly placed tables and chairs, waiters take your order, and there’s more to the interior than just whitewashed walls.

While a restaurant’s appearance is all well and good, the food is where it really counts. 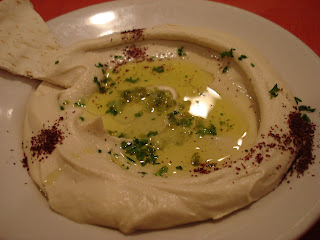 I’ve been told the hummus at Aladdin is homemade, but for me, Aladdin’s hummus is too bland. I prefer a more garlicky hummus, but I’m pretty sure that’s far from authentic.

One thing I always order from Aladdin is their falafel. 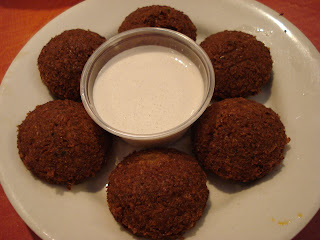 Granted, there are few things that don’t benefit from deep frying but the falafel at Aladdin are pretty damn good. There’s a nice touch of herbs and garlic with each bite. Unfortunately, I’ve always found the dipping sauce to be too watery. As a result, I skip the sauce and just enjoy the falafel.

Another one of my favorite Mediterranean dishes is fried haloumi cheese 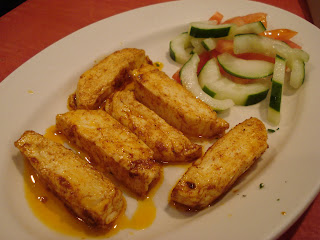 This dish really has a rich flavor, mainly because it’s nothing but cheese and garlic that has been fried in olive oil. 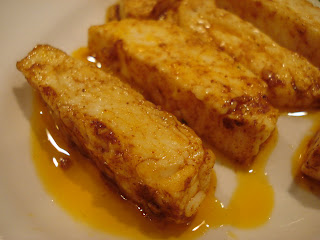 Even though this is a pretty solid example of the dish, it still leaves me wanting, especially when it comes to garlic. Another odd thing about this particular haloumi dish is that is has an odd texture, sort of a plastic grating effect on your teeth.

When it comes to Mediterranean food, the hardest thing is choosing what sort of kabob. There are lamb, beef, chicken, and the subsequent kofte kabobs. 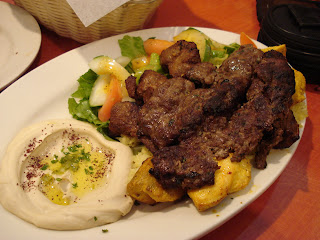 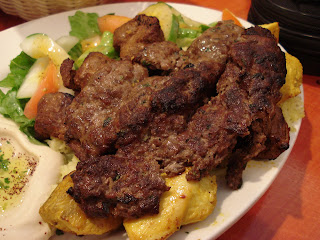 Like most things that try to be all things to all people, this dish seems to fall a little short with each kabob. The lamb is overcooked, a little tough, and has too much of a smoky flavor for the subtle lamb. The chicken is well seasoned with a fair amount of sumac but it is still overcooked. Lastly, the beef kofte kabob is like all the others, overcooked.

Overall, Aladdin is a pretty solid choice for Mediterranean in . Sure isn’t known for it’s wealth of quality Mediterranean food, and Aladdin reflects that. In a larger market, Aladdin would quickly fall to the bottom rung of the ladder, but in , Aladdin seems to be held in high regard and it’s still my first choice for .

how delicious is this dish, I am really convinced that is such a nice dish to enjoy with all family, I am so good to have it prepared at home. Buy Viagra Viagra