With near monthly trips to , I spent a fair amount of time driving through . It usually happens that I drive in right around lunch, so in an effort to avoid fast food, I’m always looking for something new to try. The last time, I had been recommended a Thai restaurant, Surin of Thailand. So, after pulling off , I was ready for lunch.

Once I was seated, I took a look at the menu, and had the odd sense of déjà vu. I then realized that this was an exact copy of the Surin of Thailand on North Highland in . Having enjoyed Surin in , I was hoping to some quality Thai food in .

After placing my order, I was immediately given a bowl of soup. 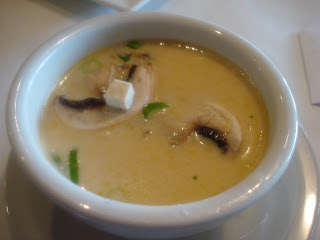 This is a nice, typical bowl of Thai coconut milk soup. It has a fair amount of mushrooms, green onions, tiny bits of tofu, and just a little hint of spice. I was curious about the Thai name for the soup, but the waiter only knew it by “spicy coconut tofu soup”. I think it’s actually a variation of tom kha gai, but I could be wrong.

Unaware of the soup, I had ordered dumplings as an appetizer. 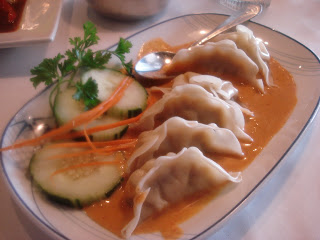 Essentially an order of pot stickers with red curry, these were odd dumplings. There was no crisp bottom that is usually indicative of pot stickers, and inside the meat was very chunky. Regardless, there was a nice flavor to the curry and just a minimal amount of heat. 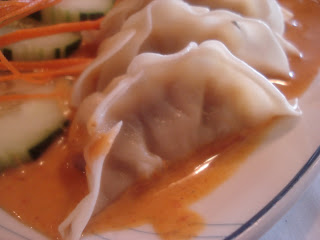 In the end, these pot stickers seemed to be nothing more than steamed gyoza in a curry sauce; that’s not a bad thing, just not what I was expecting.

With the entrée, I wanted what I consider a classic Thai dish, pad prik. 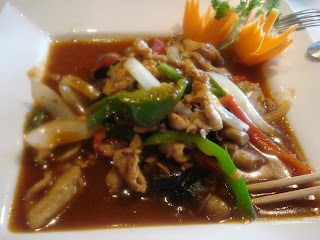 I followed Surin’s recommendation and gone with pork for this dish. 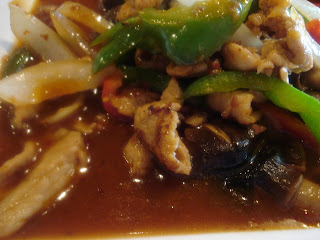 Since this was one of the few three peppers dishes on the menu, I was hoping for a good kick. While there was a nice level of heat, there was nothing overpowering. Even so, there were a good number of chili flakes floating in the sauce. Overall, this was a pleasantly average version of pad prik.

When I set out for Thai food in , I never expected to find something out of this world, but this was a nice spot for lunch. One thing I found odd was that I had to ask for chopsticks. Usually, you’ll see a few people eating with chopsticks in an Asian restaurant, but I was the only person in Surin who decided to forgo my fork. I had plenty of time to contemplate Surin of Thailand on the drive back to , and I’ve decided to its very reliable Thai food. I had enjoyed the location, and the location was a faithful reproduction. It’s comforting to know there is tasty, if not exceptional Thai food on my drive to .

They seem to have opened a Surin of Thailand in Hattiesburg as well. They bought Bangkok Cafe and renamed it about two months ago.

Ruan Thai in the house across the street is much more authentic (and spicier!)

In Thailand, it is customary to eat only noodle dishes with chopsticks. Your Pad Prik would have been eaten with a fork in one hand and a spoon in the other.

I agree; if you want authentic in Tuscaloosa, you ought to stop by Ruan Thai. The owner and a large portion of the staff are actually from Thailand, which is not at all the case for Surin.