I’ve always been told that patience is a virtue. Well, I’ve been waiting five years to be paid for a bet in college. Now that Catherine and I were in Birmingham, Cat was determined to pay up; that means we were heading to Shula’s Steak House for a huge piece of beef.

Football kitsch reigns supreme at Shula’s, to the point that the steak menu is actually printed on a football. Once we were past ordering our drinks, it was time for the steaks to be rolled out. Shula’s makes a big to do about their steaks, going as far as brining a trolley with each cut of beef to the table. I quickly decided on their 22 oz bone-in ribeye, or “cowboy steak”. Cat went for the more petite 12 oz filet.

Since we were about to consume a fair amount of beef, we decided to each get a caesar salad. 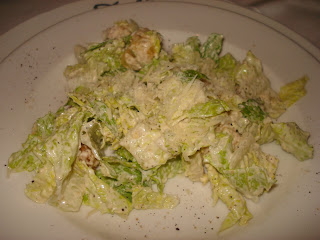 Nothing spectacular here, this is your run of the mill caesar salad. Since they had a trolley for all the meats, I was hoping they would make the salads tableside, no such luck.

After the salad, our sides were the first things to arrive. Once we saw that their mac and cheese included crab meat, Cat insisted we try it. 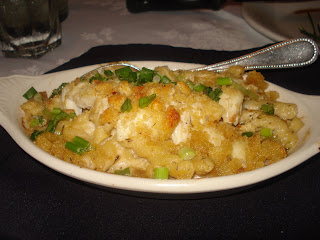 Things looked promising with this side dish, there was a nice crispy topping and a good cheesy flavor. However, the crab suffered in this dish. Most of the crab was extremely overcooked and lost in the bowl of cheese and noodles. If this was just mac & cheese, it would have been a successful dish, but the addition of the crab turned the whole thing sour.

All ruined crab aside, we were here for the steaks, and my cowboy steak looked pretty promising. 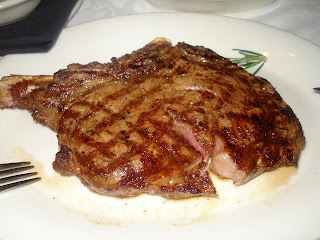 Of course, looks can be deceiving. I had asked for between medium rare & medium, but I was closer to medium well. 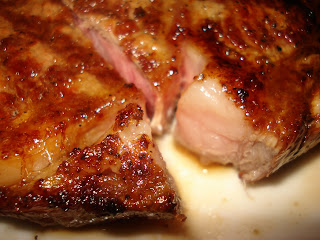 I tried to look past that and focus on the flavor, but even then, the Shula’s steak was lacking. There just wasn’t any of that big, beefy flavor you expect from a bone in ribeye.

Was it worth the 5 years wait? Not at all. I was particularly disappointed when I asked the waiter if their steaks were corn fed or corn finished. The waiter gave me a look like I was speaking Greek. I know it’s being picky, but if you’re a purveyor of beef, you should be able to answer that question.