When I spent a month in Atlanta in spring of 2008, I drove past Nam practically every day. However, it wasn’t until a few weeks ago that I paid a quick visit to the purveyors of nouvelle Vietnamese cuisine. My sister and I were looking for a relatively quick dinner spot, and Nam fir the bill.

We’re never ones to turn down appetizers, so in a matter of minutes our first one was at the table. 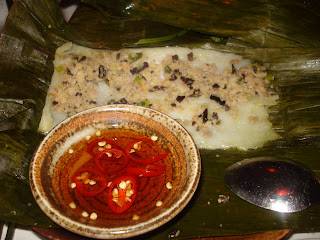 The rice flour tamale (banh nam) has an odd presentation. Instead of the traditional corn husk, these tamales are served wrapped in banana leaves. Inside the rice flour isn’t done in the traditional tamale style, but it’s plain to see there’s a fair amount of meat on each tamale. 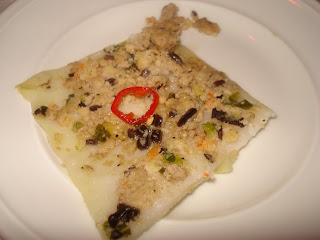 With the good spoonful of the fish sauce and chilies, these tamales were a pretty solid dish. However, if you take a bite without any sauce, nothing but blandness awaits.

The second appetizer was more along the lines of a classic fried appetizer. 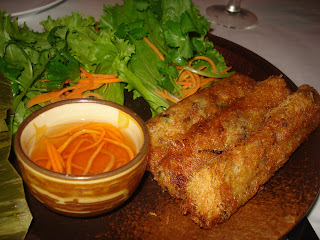 When we first saw the seafood net spring rolls (cha gio) on the menu, we were a little mystified. What exactly is a crispy “net” wrapper? It turns out the kitchen at Nam had figured how to make a spring roll from vermicelli noodles and fry it to perfection. While I wasn’t a fan of the suggestion to wrap the rolls in lettuce, I still enjoyed the dish and its accompanying sauce. I only wish they had a bottle of sriracha on the table because these spring rolls could use a good kick.

It became painfully evident that the kitchen was ready to close as our entrees were out before we were even halfway finished with our appetizers. My sister had decided to go with a nice benign fish, the seabass. 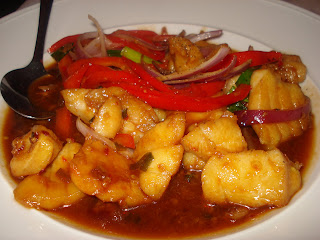 Called claypot seabass, this was a truly superb dish. The seabass was cooked to perfection and swimming in a sweet and spicy sauce. It really was a dynamite combination, and I would have been jealous if my entrée hadn’t been as good.

The waitress had recommended my entrée as the house specialty. 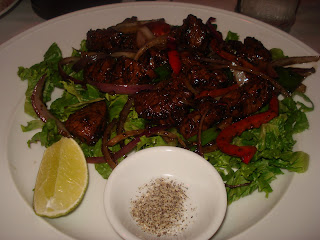 The “shaking” filet mignon (bo luc lac) is supposed to be nothing more than cubes of filet mignon that have been flash fried with chopped garlic and onions. 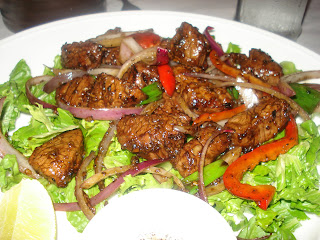 I was a little skeptical at first, but the initial bite erased all my doubts. The beef was unbelievably tender and perfectly seared. There really wasn’t even a need to chew, the beef just seemed to melt in your mouth. As if the meat wasn’t good enough, the sweetness of the peppers and crispiness of the onions played the perfect compliments.

While our appetizers might have been a little so-so, we were both blown away by our entrees. I don’t think I’ve really had a seabass that tasty or filet that tender. I begged the waitress to reveal the secret behind the shaking filet. She said it was really just an extremely hot wok, filet mignon, garlic, onions and oyster sauce. I’ve done my fair share of asian cooking and I’ve used those ingredients many times before, but I’ve never had anything like the shaking filet. It’s worth paying a visit to Nam just to enjoy the filet.