With August and La Provence under my belt, it was time to try the third of John Besh’s restaurants. Luke is Besh’s attempt at an old world style Brasserie, complete with a pretty solid list of Belgian and German beers and relatively reasonably priced French reds and whites.

Being located in the CBD, I half expected Luke to be relatively empty for a Thursday night. Inside, my expectations were shattered. Luke was a loud and lively place. As I was shown to my table, I couldn’t help but stare at the fully stocked raw bar.


Once seated, I was immediately flummoxed. There wasn’t a single item on the menu that I didn’t like. I honestly wanted to try everything. Conveniently, the assiette de charcuterie allowed me to try all of the cold appetizers. 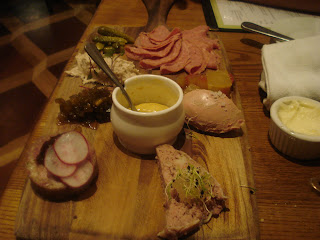 Even for a charcuterie plate, this is a very busy plate. 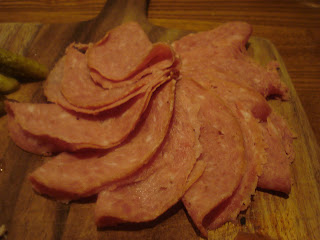 The first item on the plate was a few slices of veal salami. I’ve never had a veal based cured meat, and while this was tasty, it had an odd musty flavor. Later, the chef came out and informed me that this veal was a locally bred and was actually made and cured at La Provence. 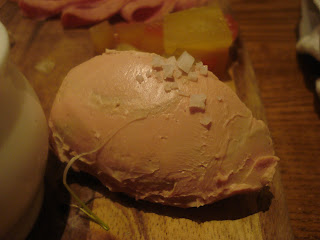 Ever since my meal at La Provence, I’ve been aching for more of their pate. Thankfully, the pate of Louisiana rabbit and duck livers was spectacular and assuaged my cravings. This pate was creamy and delicious. It has just enough of an irony finish, making it another homerun for Besh. 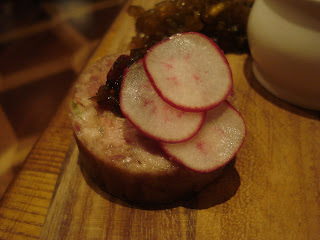 I, like most people, had an initial aversion to hogshead cheese, but I’ve since grown past that. At Luke, the hog’s head cheese is known as badischer presskopf and is served with radishes and house-made pickles. 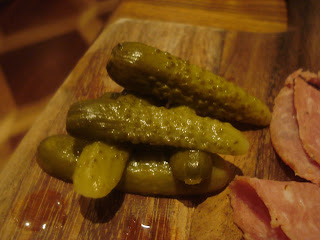 The pickles are a great addition to the charcuterie plate as their tart flavor really cuts through all the fat. 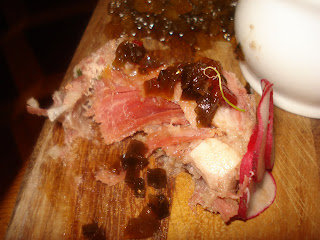 Back to the head cheese, this was a very good & pungent piece of meat. There was a lot of black pepper and a very meaty taste. The pepper jelly on top really makes the whole dish work. As for the radishes, I suppose it was good for a radish. 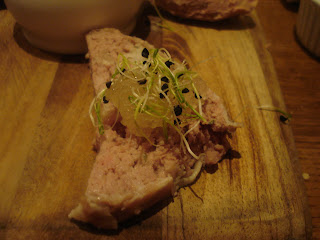 Here we have a piece of wild boar and I’m honestly not sure how it was prepared. While there was a fair amount of pork flavor to the dish, I didn’t find it on par with some of the other charcuterie plate offerings. 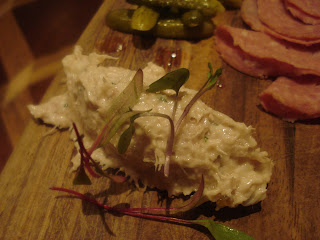 Lastly there was a rillette of Berkshire pork and it was just like I expected. It was creamy and deliciously porky. As odd as it sounds, there was simply too much on the charcuterie plate. No matter how much I wanted to, I simply couldn’t finish all of the offerings. It’s not often that a charcuterie plate is so filling, but maybe it should be.

Even though the charcuterie plate was so filling, I soldiered on. One thing I knew I had to try was the matzo ball and roast chicken soup. 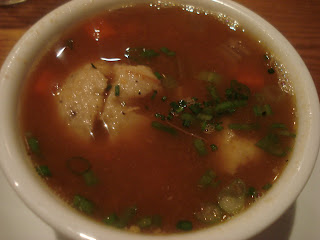 You rarely see matzo ball soup on a menu in the South and I was extremely curious to see what Besh had done with the it. 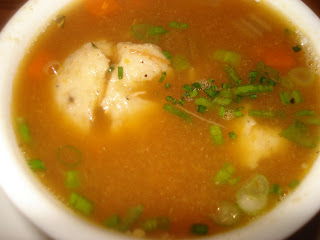 From the first spoonful, this soup had a very dark and rich flavor with the hearty carrots and onions to match. The matzo ball was your standard heavy, dense affair. It’s not what I’ve come to expect in a matzo ball soup, but a nice variation on the standard. I’m excited to make this one at home as the recipe is in Besh’s new cookbook, “My New Orleans”.

Throughout the meal, my waiter had been more than accommodating as I had waxed and waned over my choice of entrée. I knew I couldn’t leave this brasserie without trying the fries and the waiter reinforced that opinion. He said Luke was known for their fries and that they were excellent. 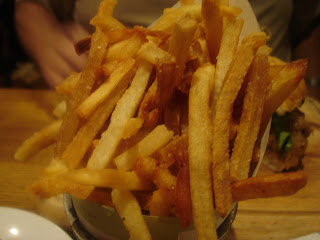 I’m happy to say there is still some truth in advertising. These fries were amazingly tender and crispy at the same time and had just the perfect amount of salt. As simple as French fries are, it’s a rarity to find fries that are made as well as those at Luke.

The Luke Burger was another one of my waiter’s recommendations. 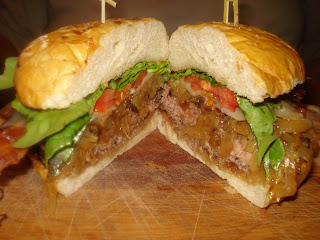 Aside from the French fries, the waiter had been heavily pushing the vanilla scented duck. I’m never one to turn down a good duck, but I wasn’t prepared for what was about to arrive. Once the waiter was within 10 feet of my table, the potent, delicious smell of vanilla hit me. 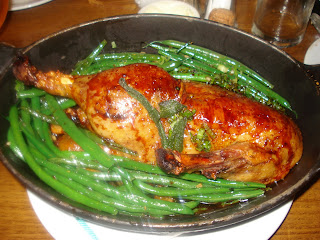 I apologize for the subpar pictures as they don’t’ do the duck justice. 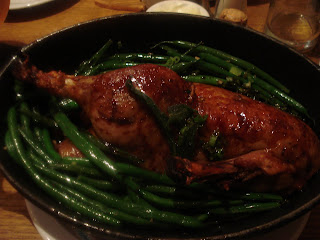 However, pictures without a flash are worse. Still the duck itself was deliciously moist, no doubt a result of the brining. 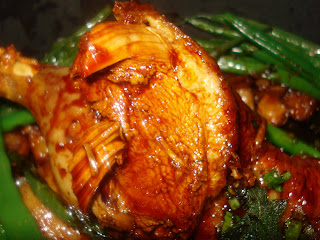 As good as the duck was on its own, the mayhaw sauce underneath was simply amazing. The sauce really made the dish for me. 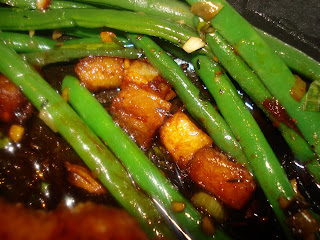 Yes, the haricot verts were very good, but they took a backseat to potatoes roasted in duck fat. This dish really was an absolute study in excess and I only regret that it came after the filling charcuterie plate. However, I’m happy to say the duck was just as good at home.

I’m not sure where I would rank Luke in terms of his other restaurants as all three have been exceptional. I really need to visit Besh’s steakhouse, just to say I’ve been to all four. However, there are a few things that stand out at Luke. I love the observation kitchen in the back dining room. I know the majority of the dishes are made in the back, but it’s still comforting to know that at least a small part of the kitchen is on display. However, the most intriguing thing is that Luke is open for breakfast, and with the raw bar opening at 9 am, I’m planning a very interesting breakfast the next time I’m in New Orleans.