It’s never hard to find an excuse to go to Holeman & Finch, so when the opportunity arose, I was there for an early bird dinner.

Like most good dinners, this one featured a quality alcoholic beverage. 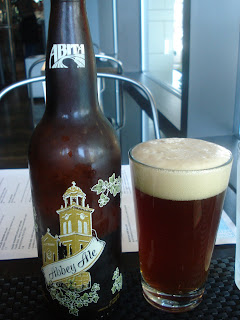 The Abita Abbey Ale is the Abita take on the classic Belgian Ale, and they do a pretty damn good job at it. You have to love the delicious irony that this beer is unavailable in my home state, despite the fact that I can be in in less than an hour. Regardless of state tax & blue laws, this beer was a wonderful compliment to what came next.

Every time I’ve been to Holeman & Finch, I’ve had the pleasure of trying at least one of their house cured meats, and this time was no exception. 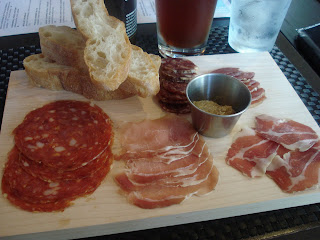 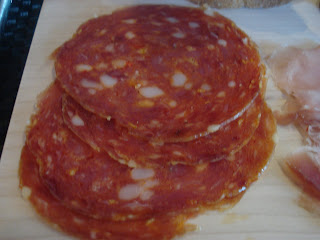 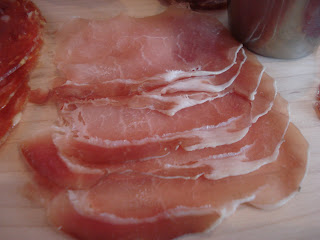 Next up was the coppa and it was a much milder flavor than the preceding soppresata. It really seemed to be nothing more than pork and salt, which allowed the quality of the pork to shine through. This coppa was sliced so thinly, it simply melted in your mouth, delicious. 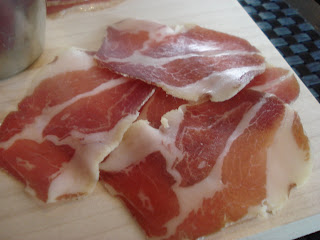 The lomo was a much bolder taste and a much thicker cut of meat. However, the seasonings were still on the delicate side. 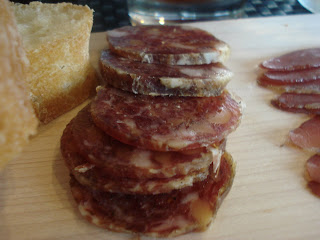 I don’t often associate a salami and oranges, and as a result this was an odd flavor combination at first. Cut into thick, meaty slices, the orange flavor of the salami seemed to overpower the pork, but it was still a quality cured meat. I’m not sure if I would order this again though; I think I would prefer something with more of a pepper or garlic base. 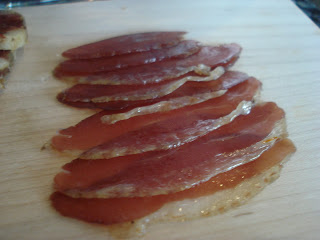 Last and definitely far from least was the duck prosciutto. This was an amazing cut of meat that had a smoky and lasting flavor. I kept trying to pick out all the flavors in the meat, and I tasted lots of black pepper and rosemary. This meat alone was worth the platter.

When it came to an entrée, I was having a hard time deciding on one or two items from the “parts” section of the menu. I had almost decided on pan roasted rabbit livers and roasted veal sweetbreads, when the waitress/hostess recommended the hot dog. I’m all for a good hot dog, but better than sweetbreads? Needless to say, I took the hostess’ advice and ordered a Holeman & Finch all beef frank. 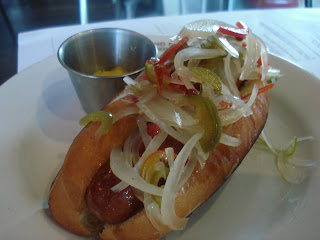 I should have known that H & F would make something grand out of hot dog, but I wasn’t expecting the plate in front me. 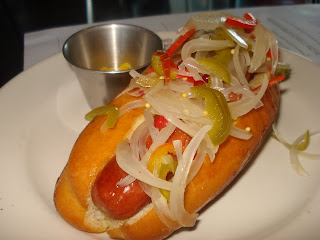 The hot dog was covered in onions and pickled jalapenos and it was all served on a parker house roll. I did my best to not spill any onions, but it was inevitable. All, I have to say is, this was probably the best hot dog I’ve ever had. The hot dog was full of a beefy flavor that I just wasn’t expecting and the crisp onion & peppers played the perfect compliment. By itself, the hot dog was juicy, a little sweet, and superb, however everything changed when I added some of the house yellow mustard. The tart of the mustard toned down the sweetness of the hot dog and made everything that much better. This really is what all hot dog should aspire to be.

It should come as no surprise that I walked away content and happy from my meal at Holeman & Finch. This is my fourth time to visit and each time there’s something new and delicious. Even though still isn’t regarded as a food destination, it takes a stellar effort to win restaurant of the year. When Holeman & Finch won that award for 2008, they deserved every bit of it.