Even though I don’t live in the city, I spent a lot of time in , and a lot of that time is spent in restaurants. When I was last there, I decided to stop by Richard Blais’ Flip Burger Boutique on Howell Mill.

Since I had skipped breakfast, I was chomping at the bit for lunch, and as a result, I was the first person in the lunch rush. Being the only diner gave me plenty of choice for parking and seats. Once I was seated, I had a chance to take a look at what Blais had to offer.

I’ve been frequently criticized for belittling the few outlets for gourmet burgers, but the naysayers need only look at the variety that Flip has to offer. As a bonus, the burgers were only 5.5 ounces each, so I felt no guilt ordering two.

Once I ordered, it took no time at all for my burgers to arrive. However, instead of diving into a beef patty, I tried the veal sweetbread nuggets. 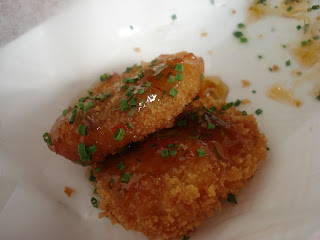 There were more in the order, but I was so enamored that I ate almost the entire order before I remembered I needed a picture. 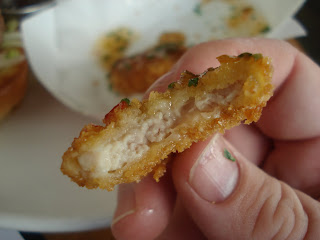 You can see just how creamy and moist the interior of the sweetbread is, and that was perfectly contrasted with the crispy exterior. I was a little worried about the sweet and sour dipping sauce, and while the subtle flavor of the sweetbread was a little lost, it was still an excellent combination. I also have to give Flip credit for serving a sweet & sour sauce with actual heat.

After devouring every one of the sweetbread nuggets, I moved onto the first burger, the burger of the day: the Korean BBQ burger. 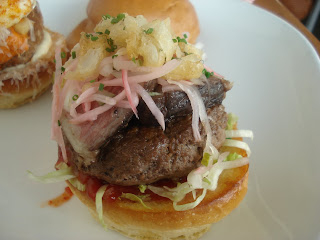 I had been sold on the description of a “Korean BBQ beef patty, kimchee ketchup, shredded cabbage, short rib, pickled cucumber, onion, and radish salad”, and Flip delivered. 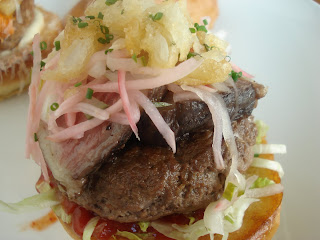 My first bite revealed an overflowing beefy flavor surrounded by a great bun. The flavors of the kimchee ketchup really shone through. 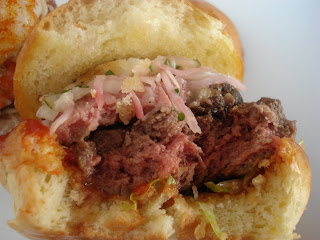 The burger itself was very well cooked and the short rib on top was fall apart tender. Unfortunately, the short rib didn’t have any of the flavors that I expect from a Korean BBQ kalbi or bulgogi. Another downside to the burger was that it was too juicy. I know that seems impossible, but there was so much juice that the bottom bun had disintegrated before I could finish. Still, even with these faults, the house mixture of hanger steak, brisket, and short rib was a winner.

My sister had told me she had really enjoyed the chorizo burger, so I decided to give it a try 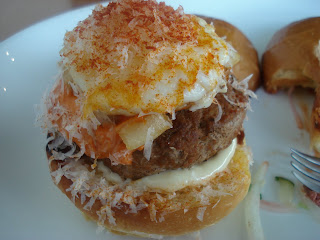 With the fried egg, hash browns, and dusting of paprika on top, this really was a pretty burger. However, I was a little overzealous when I grabbed it to take a bite. 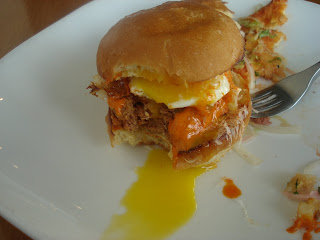 The yolk of the fried egg burst, leaving a golden trail across the plate, but, thankfully, not on my shirt. Anyway, the burger itself was something else. The first bite was nothing but chorizo, as was each subsequent bite. It was a tasty burger, but despite my best efforts, I couldn’t taste anything but chorizo. The romesco ketchup, hash browns, manchego cheese, and smoked mayo were completely missing from the flavor profile. Even the hearty, but messy fried egg couldn’t stand up to the chorizo flavor.

Even with a few hiccups, I wouldn’t hesitate to return to Blais’ Flip Burger. There are just too many burgers I want to try. All burgers aside, I would come back just to try one of the liquid nitrogen milkshakes. I’ve heard the nutella milkshake is divine, but I can’t imagine the taste of a foie gras milkshake. That is something I need to experience first hand.