Anyone who has a love of food and a television has no doubt heard of Tom Colicchio. With millions of foodies tuning in to see Top Chef, Tom has gotten a lot of face time. Well, I back in and I was going to meet my sister for lunch at Craftbar.

I have no idea how long Craft and Craftbar have existed in , and , but I think Craft has been a feature of Peachtree for that long. Regardless, I was initially confused about where Craft’s parking was. I then realized it shares a valet with the Mansion on Peachtree. That’s a nice touch.

Walking inside, you can’t help but notice the huge stacks of wood for the wood burning grill. 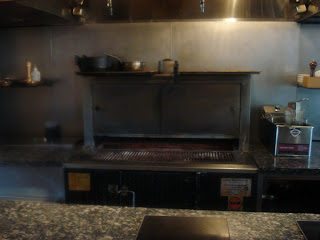 Yes, it’s a subpar picture, but even with the low quality, I can tell that you want one, just like me.

Moving on, we decided to split an appetizer. I was really interested in the pork belly, but my curiosity for the risotto balls got the better of me. 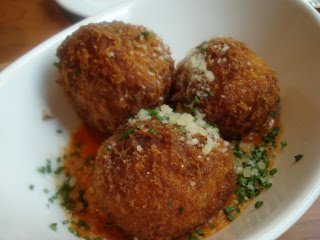 For the past few holidays, my sister and I have been trying to perfect a recipe for risotto balls, or arincini. Here, the risotto balls are very large and have a delightfully crispy exterior. I believe there was ricotta cheese on the inside, and the tomato sauce has a lot of basil to it. The one thing this dish was missing was a meat. I think to this day, the best risotto balls I’ve had were at in There’s just something about the idea of fried risotto and wild boar.

In an odd twist, we ordered the same entrée: the craftburger. 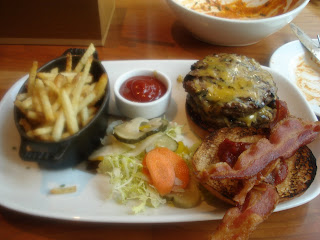 There’s little argument that Craftbar doesn’t have a beautiful presentation. 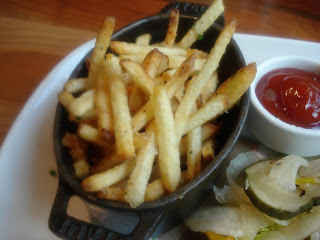 I particularly enjoy the fries served in a miniature staub dutch oven and it didn’t hurt that they were thin, crispy, well seasoned, and simply delicious. 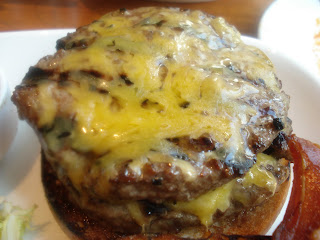 Craftbar is proud to list all of the local suppliers for their meats and vegetables. I suppose this burger is a swelling with pride, and lots of cheese. 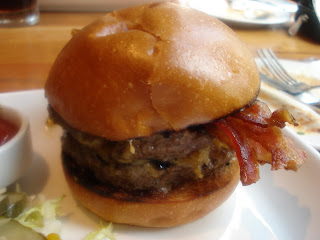 Each bite of this burger was amazingly juicy and perfectly cooked. I was delighted to find the entire thing between medium rare and medium. A small downside to the burger was the tomato jam; it was a little too sweet for my taste. However, this was overall a fine burger and it’s always a plus to have Applewood smoked bacon.

It goes without saying that Tom Colicchio’s Craftbar deserves another visit. Despite the risotto balls lacking any meat, they were a solid appetizer. The Craftburger was also a nice option. It was interesting to see that Craftbar took the more traditional route and tried to perfect the traditional bacon cheeseburger.