It seems that Sunday has become the de facto day for me to try out new recipes. Not knowing what I was in the mood for, I took a look at my ever growing collection of cookbooks. Almost by instinct, I went for a Fuschia Dunlop book. This time it was her “Revolutionary Chinese Cookbook”. Trying to find a way to use all of the beef from the Flying M Farm, I turned the pages to look at the short beef section. Knowing what ingredients I had in the kitchen, I knew only one dish would do: beef with cumin or zi ran niu rou

Once I dug a sirloin steak out of the freezer, I knew I would have more than the 12 ounces of beef that Dunlops’ recipe called for. 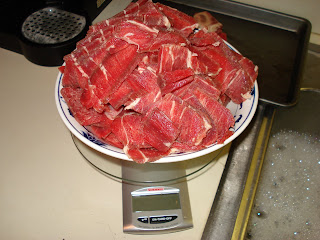 Conveniently, after slicing the sirloin into thin slices, I was sitting damn near 24 ounces of trimmed meat. This meant I could easily double the recipe without any foreseeable repercussions. Of course, I did my best to achieve Dunlop’s pedantic instructions. It’s hard to slice beef into exactly 1 ½ by 1 ¼ inch pieces.

Next it was time to make the marinade. 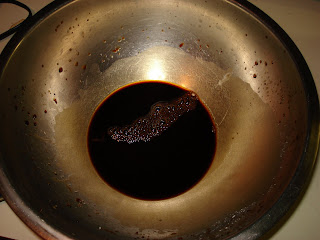 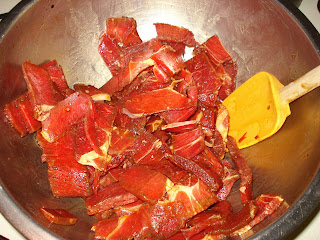 All of the beef was added to the bowl, making sure to mix well.

With the beef marinating, I got the rest of the ingredients together. 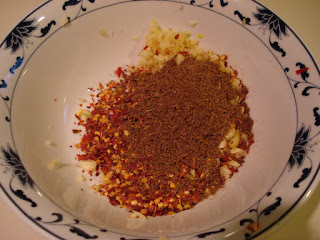 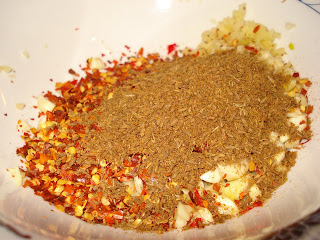 Since the ingredients would all be added at the same time, I figured it wouldn’t hurt to mix them now. Also, I figured it was worth the time to grind the cumin seeds, especially since it was in the name of the dish.

Now it was time to start the cooking. First I added about 2 cups of peanut oil to my wok, heated it to 275 and added the beef. 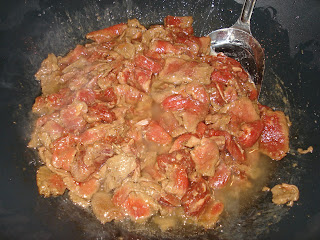 The idea is to only cook the beef until the pieces have separated. As soon as they did, I removed them from the wok, drained the oil and set them off to the side.

Leaving just 3 tablespoons of oil, the flame was kicked to high and the other bowl of ingredients was added. 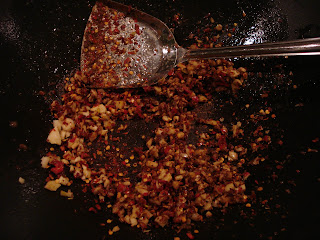 I love it when a recipe says stir fry until fragrant, it’s so deliciously vague. Anyway, once the mixture was really pungent, I reintroduced the beef. 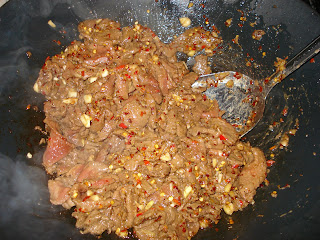 A little salt to taste and I was good to go.

The last fresh ingredients were 4 scallions (green parts only) that had been finely sliced. 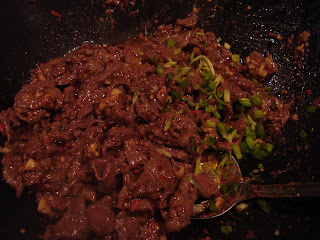 You’ll have to look on the top right of the picture to see them. However, now that everything has been added, the whole lot was tossed together and ready to serve. 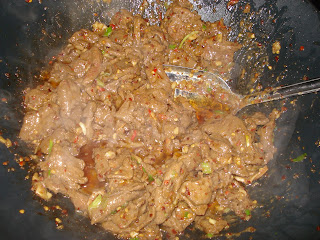 One last thing, you need 2 tsps of sesame oil stirred in at the last minute.

Here you can see the beef with cumin in all its glory. 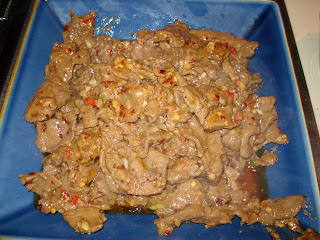 Not that attractive is it? 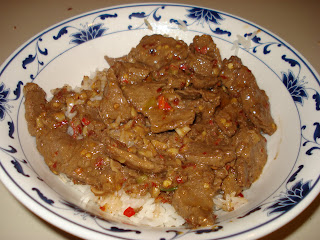 Still, everything looks better over rice. Regardless, what’s important is the taste, and I’ll admit it took me a minute or two to warm up to this dish. I’m not used to so much cumin in Chinese cuisine. However, this is a Hunan cookbook. I’m more accustomed to a Sichuan style of cooking. Once I got over the cumin mental hurdle, I became a real fan of this dish. The full beef flavor is really complimented by the cumin and I love all the extra spice to the dish. However, my favorite thing about this dish is how easy it is to make and how many of the ingredients I always have on hand. This really could be a go to recipe for when I need a quick, easy, and delicious meal.

Good work. I also use potato starch in lieu of potato flour.

I went to high school with you, we were in car club together. Ronnie S. told me about your blog, Pretty cool man, I'm also very into cooking and the pursuit of gastronomical happiness

I really think that your idea to cook is so amazingly, it is so different but at the same time, I am really pleased to know this secret of cooking. Buy Viagra Viagra