I have a daunting task in front of me. In my garage freezer is two lamb’s worth of lamb meat. Personally, I love the stuff, but it’s incredibly hard to find recipes for ground lamb. Sure you have the odd kebab or burger recipe or that great stuffed zucchini recipe off Food & Wine.com. Nevertheless, as hard as it is to find something for ground lamb, finding a recipe for lamb shoulder seems like the quest for the Holy Grail. Thankfully, Jennifer McLagan has come to my rescue with her book “Bones – Recipes, History, & Lore”. Inside this masterpiece is a recipe for lamb roasted over potatoes, but not just any cut of lamb. This recipe gives the option of lamb shoulder or leg of lamb, but that’s enough talk, let’s get to work.

First things first, let’s see what sort of meat we have to work with. 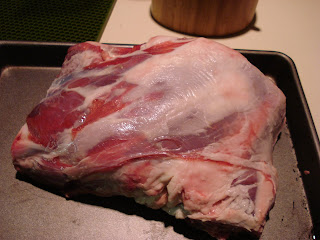 I’ll be honest, I’ve never really seen a lamb shoulder. I’m not even sure what the cut is supposed to look like. 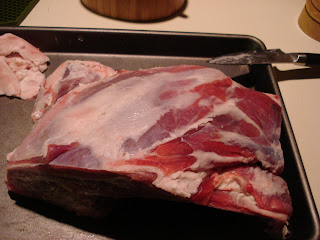 Complaining about lack of experience won’t do me any good, so I starts by trimming any excess fat.

With the extra fat in the garbage, I used a paring knife and made a number of ½ deep slits throughout the shoulder. 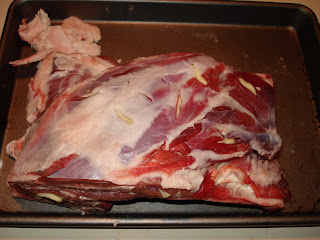 Then, I added a sliver of garlic into each slit.

Next, the lamb was drizzled with 1 tablespoon of olive oil. 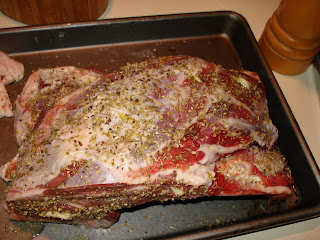 After the oil, I sprinkled the lamb with 2 teaspoons of dried oregano. McLagan emphasis the use of Greek oregano; I’m sure it’s great, but I just used the McCormick I had on hand. The last step of the lamb prep is simple, let stand at room temperature for 1 hour.

After preheating the oven to 450, I started working on the potatoes. Using a handheld mandolin, I sliced 5 potatoes about 1/8 inch thick. 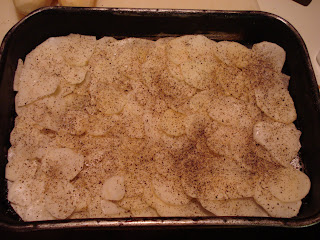 I wasn’t sure if McLagan intended to slice them widthwise or lengthwise, so I figured a mixture wouldn’t hurt. Before I could place the potatoes in the pan, I drizzled a tablespoon or so of olive oil in the pan. 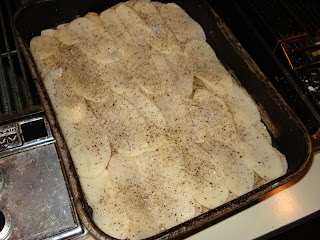 Now the potatoes can be added and seasoned with the usual salt and pepper.

Since an hour had passed, I seasoned the lamb with salt and pepper and placed the rounded side down on the potatoes. 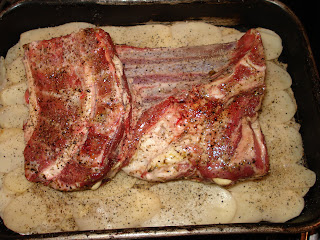 From here it was into the 450 degree oven to roast for 15 minutes. 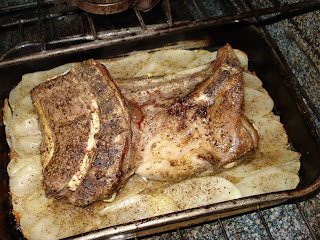 Now the temperature is lowered the usual 350 and the lamb is left to roast for 1 to 1 ¼ hours or until 135 degrees.

About an hour later, I took the temperature of the lamb and was shocked to see it had already crested 140. 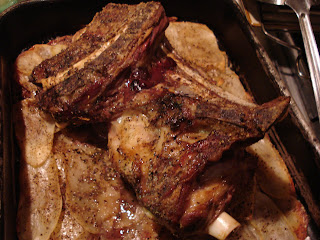 I immediately pulled it out of the oven, put the roast on a platter, covered it with foil and let it rest for 15 or so minutes.

In the meantime, I turned the oven back to 450 and put the potatoes back in to crisp up. 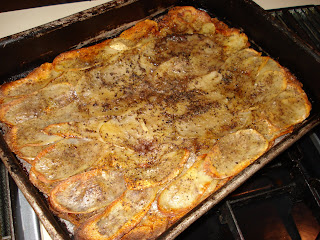 In no time at all, I had a pan of crispy, lamb scented potatoes.

Now it was time to carve the lamb. 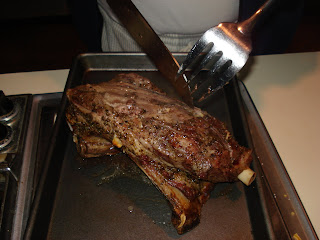 My previously mentioned lack of experience with lamb should meant I wasn’t really sure how to cut this roast. 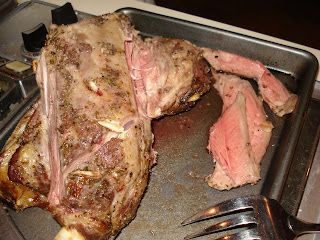 Even so, I managed to cut off a few test slices and they were a beautiful medium rare. The flavors were wonderful, and McLagan’s recipe had performed flawlessly, as usual.

With its unusually large number of recipes for joints of lamb, I’m sure I’ll be paying a number of visits to Jennifer McLagan and her book, “Bones”. In the meantime, I’ll do a little studying to see if this was a normal cut for a lamb shoulder or did those butchers in Kosciusko do something odd again?