As nice a city Birmingham is, I rarely stop there. Usually, I’m on my way to Atlanta and after fueling up in Tuscaloosa, it’s no stopping till Buckhead. However, my friend Catherine was in Alabama for work, and we decided to meet in Birmingham.

Even though I tried to leave early, I didn’t make it to Birmingham until 2. Knowing our lunch options would be limited, I immediately suggested Frank Stitt’s Bottega Cafe.

Once we were seated, we started the arduous debate over what we should have for lunch. This is not an easy task, when you’ve got two headstrong people trying to decided on an appetizer. 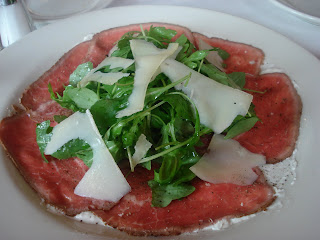 Eventually, we decide on the beef carpaccio. You can tell the tenderloin has been ever so slightly seared, leaving everything inside that beautiful red. 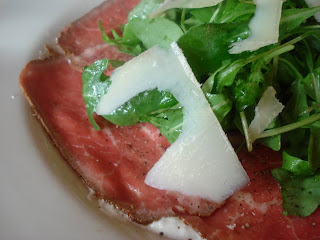 Thankfully, the carpaccio was as delicious as it looked. The salad and parmesan shavings were just the right touch. However, as much as I liked the horseradish sauce underneath, I kept looking for an extra kick.

While choosing an appetizer had been a battle of wills, choosing my entree was a matter of indecision. However, all my doubts were erased when the waitress told us about the special, a meat lover’s lasagna. 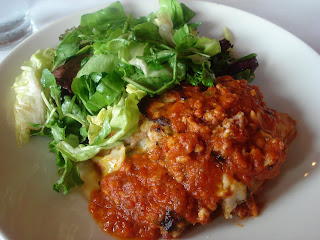 Made with homemade pasta and a variety of meats, this lasagna is something special. 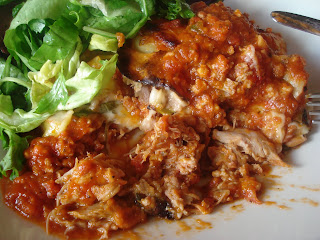 Filled with ground beef, ground chicken, and pork shoulder, this was lasagna was far from lacking. In fact, the only downside was trying to keep Cat from stealing bites. This really could be nearly the best lasagna I’ve ever had.

In between stealing bites of my lasagna, Cat had a chance to enjoy here own entree, the crabcakes. 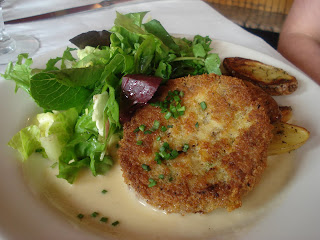 While she wasn’t looking, I took a bite of her crab cakes, and they were delicious. With little to no filler, these crab cakes were overflowing with perfectly seasoned and cooked crabmeat. When I tasted the sauce, I found it be a little tart, but with the crabmeat, it all made sense.

After our entrees had been cleared away, I asked about Stitt’s cookbooks, “Bottega Favorita” and “Southern Table”. I’m always on the lookout for a signed cookbook, and every copy at the Bottega Cafe was signed. However, my waitress had better news, Frank was in house and could personalize my copies. 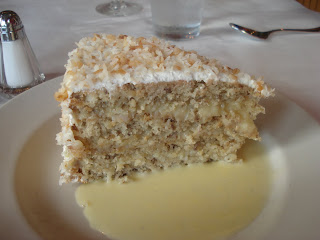 Before my books appeared, Cat and I decided to try a slice of the house coconut cake. 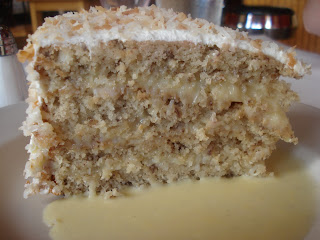 Even with the picture, it’s hard to describe just how moist and delicious this cake was. Each layer was practically dripping with coconut flavor. However, despite our best efforts, there was just too much to finish. However, the real treat of the meal was when Frank Stitt came out to personally deliver the books. Not only was Stiff a great chef, he was a gracious host. It’s experiences like this that make me want to stop in Birmingham more often.