I’ve been reading about Abattoir for months. When I first read about it, it was still in the planning stages, but then the economy put it on hiatus. However, they somehow opened, and I’ve pining to go ever since. It didn’t help when Jennifer Zyman published an awesome series of pictures on her blog, the Blissful Glutton. Things were made even easier when it streaked across the foodie network, Abattoir is now open for lunch. So, I was in and I was going to have lunch at Abattoir. I was sincerely hoping that good things come to those who wait.

I’ll spare you the details, but it is a very nicely designed place to eat. I was immediately a fan of the menu placemats, particularly because they change daily. 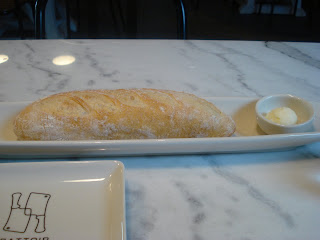 Sure, it’s just a loaf of bread, but it was hot, fresh, and crispy. 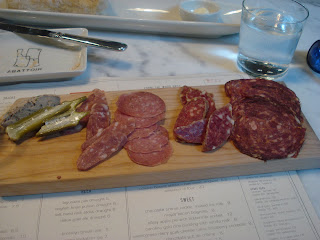 I suppose Abattoir was looking to differentiate themselves from some of the other cured meat purveyors in because the plate had some interesting offerings. From left to right, there is a pork rilette, pickled okra, Chinese sausage, lonzino, saucisson sec, and a venison soppresata. 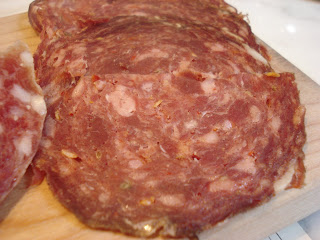 I was immediately interested in the venison soppresata; it’s not often you see venison cured meat, at least anything besides summer sausage. It had the spice of a soppresata, but a very different, almost ragged texture. Each slice seemed to fall apart in my hands. There was a slight gamey taste, but nothing too out of the ordinary for venison. 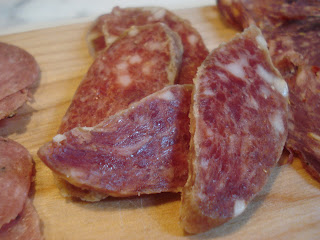 The saucisson sec was completely different, with a very clean, porky flavor. The flavors seemed like most other saucisson secs that I’ve had. There was a nice flavor of spice, but nothing too overwhelming. 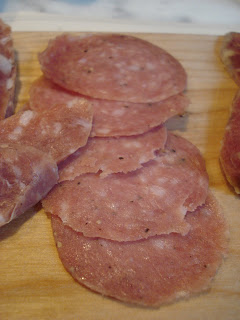 Lonzino, after a few bites, was quickly my least favorite. I hate to be crass, but this had the taste and texture of Oscar Meyer luncheon meat. 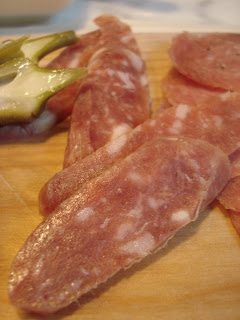 I was raised eating Chinese sausage or lap chong, but I’ve never seen one like this. The flavors weren’t like any Chinese sausage I’ve ever had. This had the distinct flavor of cinnamon and nutmeg. Now, almost two weeks later, I’m still not sure if I like this sausage. 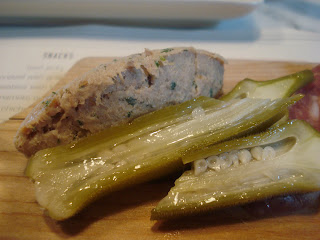 Last on the plate were the pork rilette and pickled okra. The rilette was superb. The simplicity of the dish really let the pork shine through. The okra…tasted just like a very crunchy piece of okra. I couldn’t pick out any pickling flavors at all.

Once I convinced the waiter I was finished with the charcuterie plate, my entrée arrived. 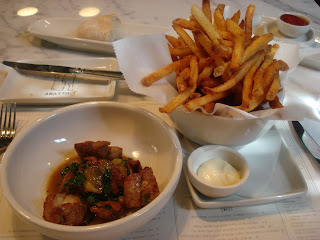 Crispy veal sweetbreads with chanterelles and a side of the house French fries sound like a great lunch to me.

I had to try the French fries first. 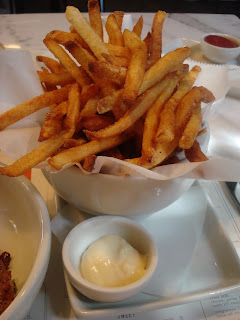 The first fry wasn’t as crispy as I usually like, but I thought it was perfectly seasoned and simply delicious. 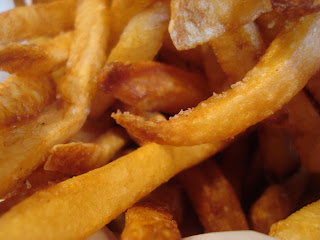 When I kept eating the fries, I found that most of them were delightfully crispy and just as tasty. As much as I want to enjoy mayonnaise with French fries, I just can’t. Still, these are some high quality fries.

Moving on to the main attraction, I turned my eyes to the sweetbreads. 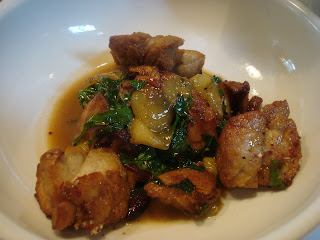 Each bite of the well cooked sweetbread was a deep, caramelized outside and the perfect creamy interior. 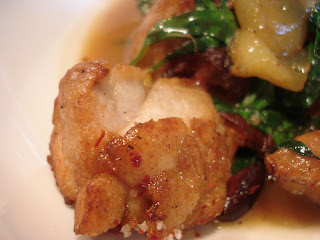 These sweetbreads were magnificent, and the sauce was insanely rich and unctuous. I know that sweetbreads are a tasty dish, but the crispy sweetbreads at Abattoir are in a league of their own. My only real fault with the dish was the greens. Don’t get me wrong, they were very good, but I just didn’t seem them as necessary to the dish.

Overall, I had thoroughly enjoyed finally eating at Abattoir. Yes, I think some of the hype was overdone. I had been blown away by the sweetbreads but left feeling a little blasé about some of the charcuterie offerings. Honestly, I can’t wait to come back to Abattoir, but it must be with a group. There was simply too much for one person to try. I need at least two companions to get a real feel for the menu. Any takers?