I’m always on the lookout for a good poboy and thanks to a few twitter suggestions, I was heading to the Parkway Bakery. 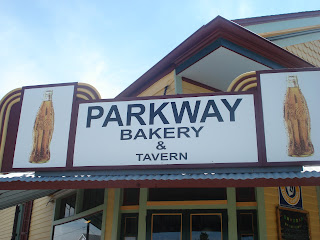 Before I went to New Orleans last weekend, I decided to take a look at this place and see what sort of reviews it had received. The front page of their website says it all: 1st place for roast beef po’boy, and 2nd for oyster & shrimp po’boys according to Gambit Weekly. I’ve never really heard of Gambit Weekly, but those are some pretty high accolades.

It really seemed like we were in the middle of an unsavory neighborhood, but when I parked out front, the place was packed. Once inside, there was your usual amount of New Orleans kitsch with plenty of old politician’s posters, sports memorabilia, and framed newspaper headlines.

Once I had claimed in seat, I joined the line to order. After 20 or so minutes of waiting to order and then waiting for the order to be ready, I picked up the first tray from the window. 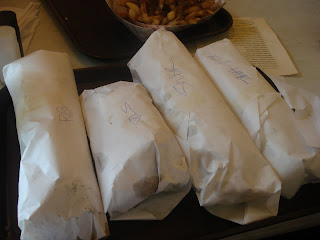 The first good sign was just how heavy the tray was. There’s a lot of meat on these sandwiches.

However, before I could really delve into a sandwich, I had to try the french fries and gravy. 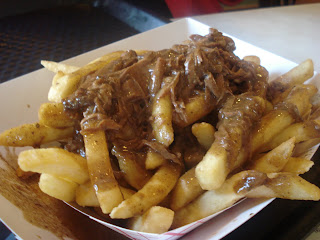 The biggest shocker about this dish was the meat. The last thing I expected was for the fries to be covered in both meat and gravy, but there was plenty of both to go around. Going for the gusto, I went right for a fry and was delighted to find them crispy and completely covered in a delicious gravy. Even though this was a large, I believe a regular order of gravy fries is a meal unto itself. 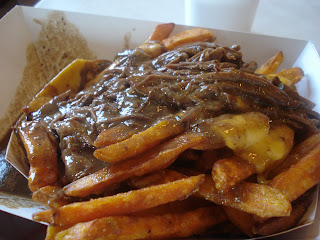 This is a regular sized order of fries with cheese and gravy, and I’m delighted to report the sweet potato fries are just as crisp and delicious as the regular potatoes.

Moving on to the po’boys the first up was a large home cooked hot roast beef with gravy po’boy. 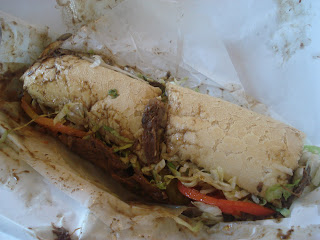 It’s not an elegant site, but is there really such thing as a neat and tidy po’boy? 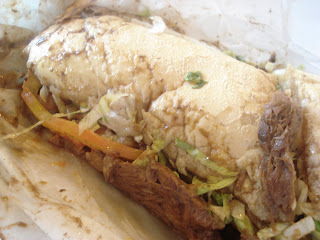 To begin, the large po’boy really is gigantic, and it’s not all bread. There is nearly a metric ton of roast beef in this sandwich. While this is a tasty sandwich, I really do think that Parasol’s has a better roast beef po’boy, especially when it comes to the gravy. While there is plenty of gravy at the Parkway Bakery, it lacks any real depth.

After eating half a large roast beef, I was completely satisfied, but I knew I had to try the other award winner, the shrimp po’boy. 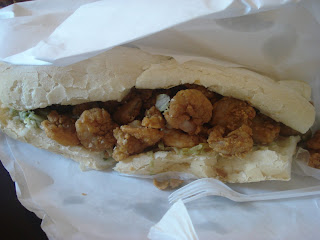 As you can see, the entire Gulf of Mexico’s supply of shrimp has been crammed into this one sandwich. 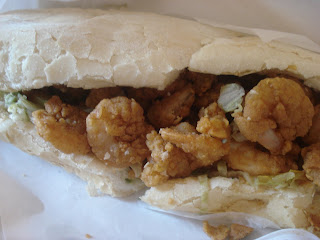 This was actually a really difficult sandwich to eat. As soon as you picked up a half, the shrimp came pouring out of every opening. Soldiering on, I was able to take a bite and was happy to find that the shrimp had a subtle, but very tasty breading. 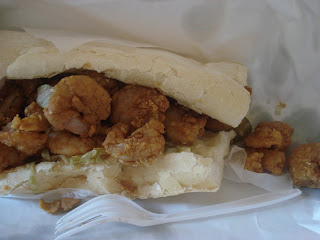 I soon realized this sandwich needed a good kick and with a few shots of Crystal hot sauce, the sandwich really came into its own. Now I had the delicious shrimp, the crusty french bread and the bite of hot sauce all together and it was amazing.

As is so often the case, my eyes had been much larger than my stomach and I did my best to pack everything to go. While I was looking for to-go bags, the good people in the kitchen were nice enough to smile for a picture. 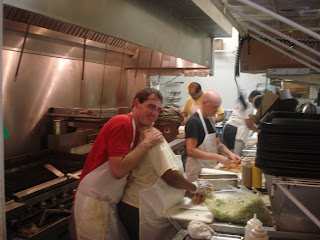 I’m glad I took the time to drive to the Parkway Bakery, they do a great job with their po’boys. However, as good as their roast beef was, I’m still a firm believer in the Parasol’s po’boy. The shrimp po’boy is another story. As far as I’m concerned, the Parkway Bakery has the market cornered with that sandwich.