It’s been a number of months since I last had dim sum at Oriental Pearl, but I was back in and in the mood for dumplings. Thankfully, it was a Sunday and the restaurant was relatively full. A full dim sum place is always a plus; a bigger crowd means higher turnover and fresher food.

As soon as we were seated, a steamer cart turned up at our table. The very first thing to hit the table was the rice noodles with shrimp or ha cheung fun. 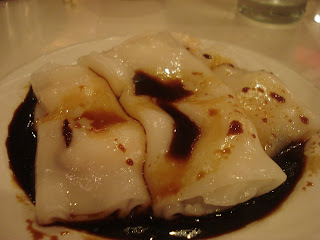 A typical problem with this dish is tiny shrimp, but Oriental Pearl had large, juicy shrimp stuffed inside the noodles. With everything doused in a sweet soy sauce, it was a good start to the meal.


I rarely order the second dish, but for some reason, the pork sticky buns (char siu bao) sounded extra tasty. 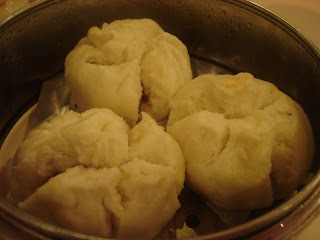 The reason I usually skip the pork buns is because the dough is so filling, and these pork buns were no exception. Deep inside the dough were delicious chunks of bbq pork, definitely a fine example of the dish.

Moving on to the dumplings, the first ones were the scallop dumplings. 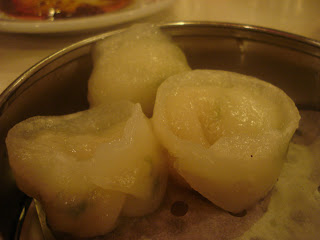 Nothing too exceptional about these dumplings, they were nicely cooked and had a lot of green onion.

Still working from the first cart, we also picked a tray of chicken siumai. 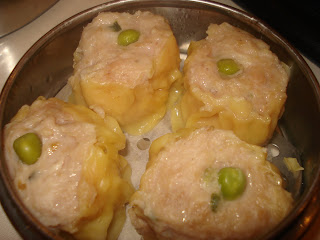 I was interested in how the chicken tasted in a siumai. Usually, I’ll see either pork, shrimp, or a combination of the two, but this is one of the few times I’ve been a chicken siumai and it was worth trying. Yes, the texture was different, but that familiar greasy, delicious taste was all there. 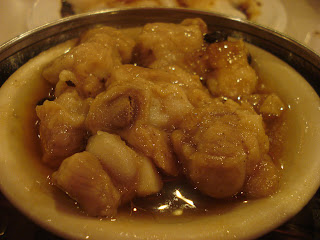 These were much better than the first time I wrote about Oriental Pearl. I could easily pull a single rib this time and the black bean flavor was superb. I only wish there had been some peppers in the dish.

My sister and I can never turn down an order of ha gao. 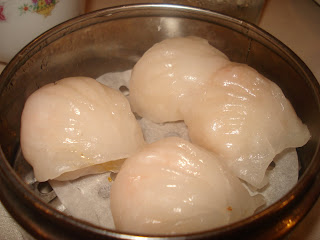 Like before, these are pretty average shrimp dumplings. Regardless, they were a welcome site and readily consumed.

Why stop with one shrimp dumpling when you have so many more? For that reason, we got an order of the bird’s nest dumpling (zha ha gao). 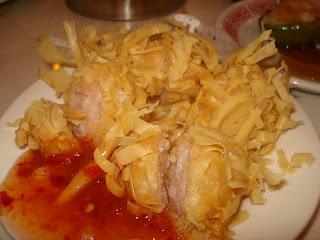 Crispy on the outside, juicy on the inside, and perfectly matched with chili sauce, there’s nothing more to say about these dumplings.

I could tell that Jennifer and Aaron were starting to wane, so I quickly scanned the approaching carts and got an order of the pepper shrimp. 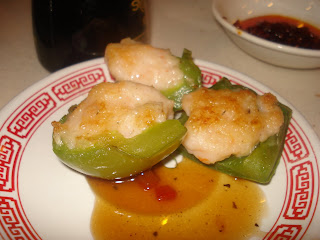 On previous visits, I’ve had better examples of this dish; unfortunately, this time the pepper shrimp were cold with oddly small portions of peppers and sauce.

It’s only recently that I’ve taken to ordering chicken feet on my own. 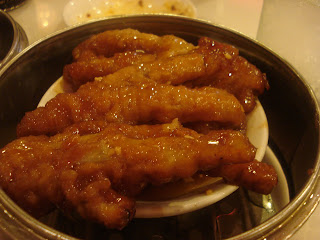 However, it’s always better to have a crowd. As much as I enjoy chicken feet, it’s difficult to eat an entire order by yourself. 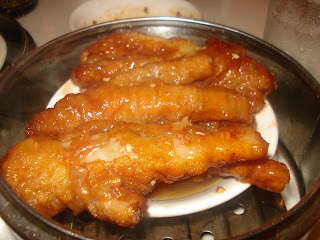 It didn’t take much goading to get Aaron to try the feet and we both found them to be fresh from the steamer and with a delightful sweetness. I don’t think Aaron has ever eaten chicken feet before, but this was a great introduction to the dish.

Sometimes you have to ask for/look for that particular dish at dim sum. After asking three or four different waiters, one finally returned with one of my favorites, the bean curd roll (seen juk guen) 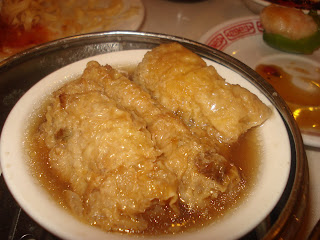 This was far and away my favorite dish of the day. The rolls were fat, juicy and literally exploding with flavor and stuffing.

After enjoying too much dim sum, we were all sitting at the table, enjoying tea when we saw a cart with a griddle walk past. Never satisfied, I called it over to take a look. 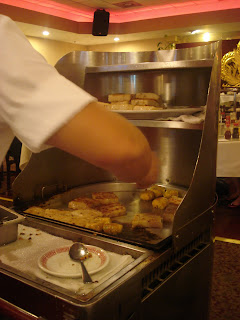 The woman behind the cart told us she served bean curd and shrimp balls. It was a group decision to try at least one order of the shrimp balls. 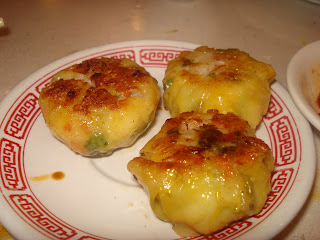 I’m sure that anything freshly pan fried would be better than it’s cold cart destined cousin, but these shrimp balls had a beautiful crust and were absolutely delicious. With loads of green onion and shrimp, it’s a shame these dumpling appeared at the end of the meal.

It’s been unfair to Oriental Pearl that I’ve only written about their weekday dim sum offerings. On the weekend, everything changes. The food is fresher, the crowds bigger, and the carts more plentiful. With their weekend dim sum, the Oriental Pearl is definitely my favorite dim sum spot.


For my first review of Oriental Pearl, please click here

I really believe this plate is one of the most delicious dish that I have ever tried on my life, I really invite them to eat it right now. Buy Viagra Viagra