When I was last in it was for a long weekend. The extended trip meant I was in town for my sister’s birthday. So on Monday, the 31st, I was invited to her birthday dinner. After volunteering to drive, Aaron gave me some vague directions, and in no time at all, we were by the Fox theater and crossing the street to Livingston Restaurant + Bar.

My first exposure to had been at the Corks and Forks festival the day before.

I’ll assume the pork sliders and tart played some factor in Aaron’s dinner decision. Once the car was parked, we made our way through the beautifully redone hotel and to the front of the restaurant. We were really all floored by the décor. As the only person who had been there before the renovation, Aaron agreed the improvements were staggering.

It’s not often that I try out house cocktails, but the airmail was just too attractive to pass up. 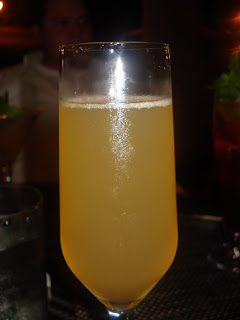 A mixture of rum honey, lime and champagne, this seemed like a French 75 without the gin and it was a pretty tasty concoction.

The beauty of eating with fellow foodies like Jennifer and Aaron is they are more than willing to try a number of dishes. The first appetizer of our evening was the short rib ravioli. 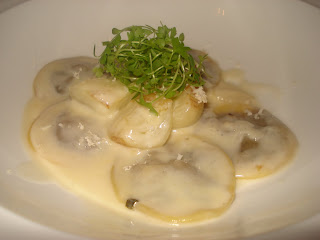 A thick, slight sweet cream sauce really dominated this dish. I was surprised at just how doughy the ravioli were and how painfully nonexistent the short rib was. There was a nice background flavor of the cippolini onions, but it took a second try before I could finally taste the short rib flavor, even though it was subdued.

One of the most difficult tasks at dinner is turning down a duck dish. Thankfully our group resolve was weak and we ordered the duck croquettes. 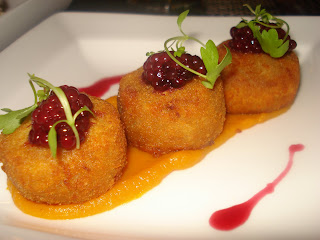 I really could have done without the sweet potato base, but the duck was encased in a very nice crust. While the duck inside was quite plentiful, it was a little on the dry side.

Last of the appetizers was onset bay oyster gratin. 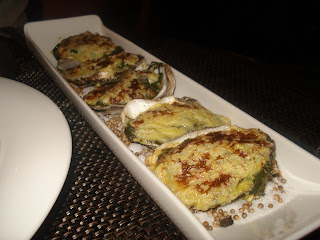 Served on a bed of salt and coriander, the oysters had a delightful cheesy top with a good chunk of bacon for each oyster. It helps that they used a quality bacon like Benton Farms. 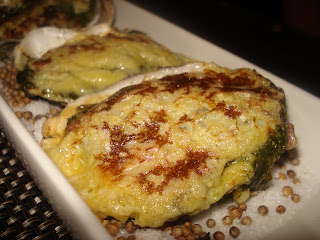 The true sign of greatness is a well cooked oyster and these oysters were just that, and they were delicious.

Continuing with the shellfish, the first of our shared entrees arrived. 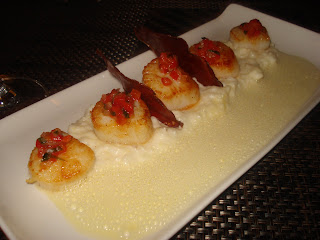 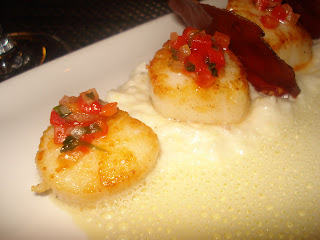 The scallops were tender, well seared, and perfectly cooked. As always Anson Mill grits were superb, but the corn puree was tasty as well. I was a big fan of the bacon “crisper”, those two pieces were a very nice tough.

Having had enough seafood, the second entrée was something a little different. 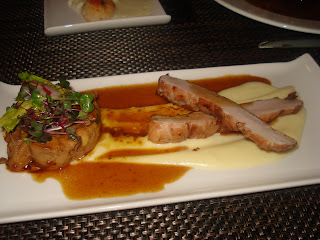 It’s not often you see rabbit on a menu, particularly rabbit. 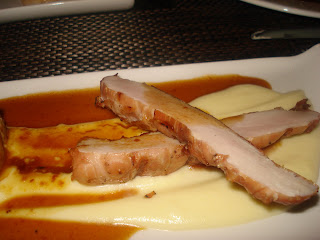 The first piece I tried part of the loin that had been wrapped in speck. One could argue that the speck overshadowed the flavor of the rabbit but not me. There was a certain harmony to the flavors that resulted in delicious, moist rabbit that had just enough pork flavor. 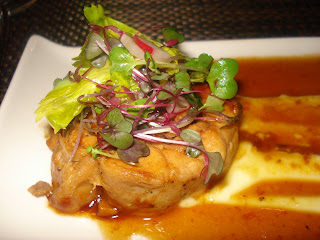 This second piece was where the rabbit took center stage. Big chunks of rabbit were bursting with delicious rabbit flavor. The potato puree underneath wasn’t too shabby either.

Our last entrée is a cut of meat I’d like to see more often. 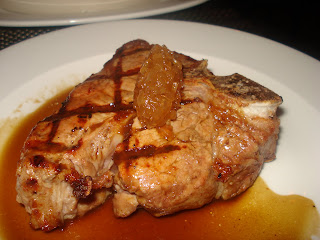 When was the last time you saw a veal porterhouse on the menu? This sparked a lively conversation about what happens to the rest of the calf. Usually you see three or four cuts of veal on menus or in the store, what is made from the rest? Either way, this was a delightfully tender piece of meat that was well complimented by the sweet marmalade on top. There are few things as satisfying as a piece of medium rare veal filet.

You would think that three appetizers and three entrées would have been enough but we had to try a side dish as well. 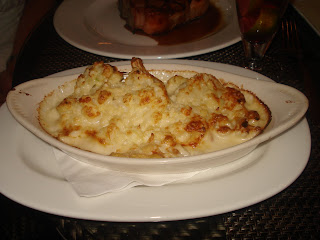 Another rarely seen dish, cauliflower au gratin is cooked with cream. As much as the cream builds the dish, the au gratin topping is what really makes this dish what it is, delicious.

After all that, I was more than content but our waitress made a real good pitch for their cinnamon beignets. I was skeptical, especially of based beignets, but I decided to give it a try. 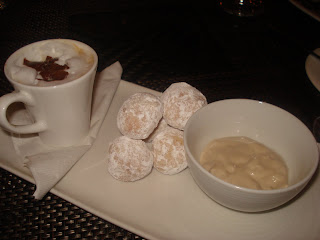 The Italian meringue was an interesting touch, yes it was very tasty but not my first choice for accompanying beignets. Likewise, the café au lait with gianduja chocolate was good but it’s a poor substitute for my beloved chicory. 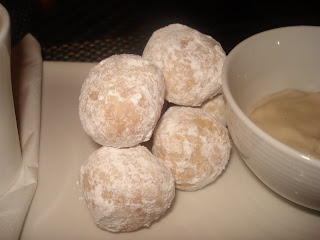 Last but not least, the star of the dish, yes these beignets weren’t bad. They had a decent amount of powdered sugar, but the dough was off. This was much better than other beignets I’ve had, but regional food just doesn’t travel well.

When we sat down at , I had certain expectations. I was really expecting something a little more similar to the sliders and torte we enjoyed at Corks and Forks. While the slider had been all well and good, had much more up their sleeve. Sure there were a few stumbles along the way, and yes our waitress was a little on the inexperienced side, but this was a more than pleasant and tasty meal. This goes to show that it helps to put a good foot forward at Festivals. Without the approachable staff and tasty food, I wouldn’t have given another thought. I’m looking at you Legal Seafood.