There is no shortage of lunch options in Buckhead, but when you want something relatively quick and convenient, your options quickly dwindle. One of those few remaining options is Hashiguchi Jr, a restaurant that suffers from extreme location issues. Sure near Lenox mall is always a plus, but when your location is down a side street and under another restaurant, you have a problem.

All problems aside, I was able to have a quick lunch with Jennifer before I left Atlanta. After being shown our seats, it took a few minutes before we could decide on our sushi order. 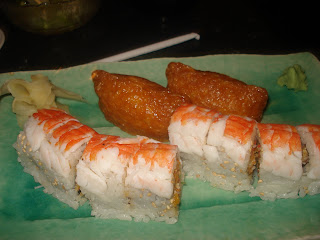 The spicy super crunch roll is a pretty good roll and it really is spicy with plenty of wasabi. 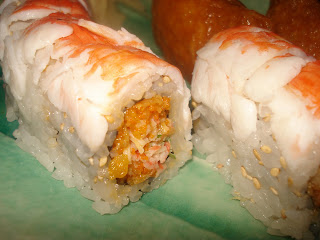 I was a little surprised to see shrimp instead of salmon on top, but I suppose each restaurant has their own version. 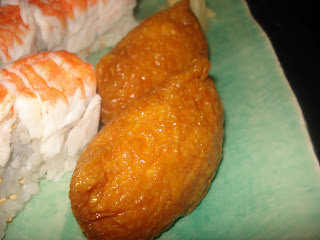 Unfortunately when it arrived it was nothing more than a fried pouch of bean curd with sweet rice inside. Even with the odd ingredients it was a tasty roll, but far from your normal nigiri.

As I’ve said before, I’m a sucker for dumplings and Jennifer shares the same trait. So when the waitress said gyoza were available and with a “special sauce”, we were hooked. 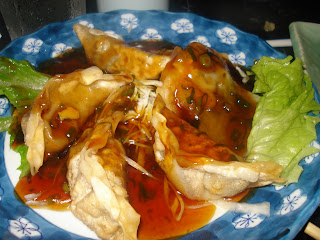 The gyoza themselves are actually a good dumplings with a nice amount of green onion and pork filling. The special sauce is something to be avoided. It’s really nothing more than a thick teriyaki sauce and it doesn’t bring anything worthwhile to the table. 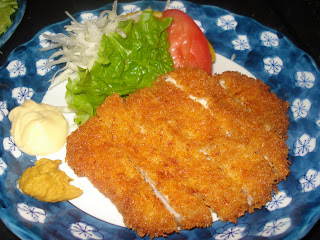 On its own the pork cutlet was well fried and very tasty, especially with the little dollop of mustard that was provided. 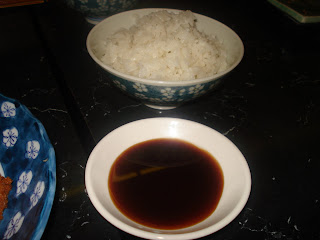 Of course a side of rice was provided along with a small bowl of very thick sauce. Unlike the special sauce for the gyoza, this sauce actually complimented the pork cutlet and really rounded out the dish.

When all was said and done, we were finished in under an hour and that’s an important feature of a lunch spot. Everyone loves a lazy lunch, but duty calls. Hashiguchi Jr. had provided just that. Sure there wasn’t anything too exceptional about the meal, particularly the “special sauce”, but this was a solid lunch, and I’ll keep it in mind next time I need a quick spot on Peachtree.

you are cynical ... and I like it!!! I share your sentiments with regards to hash. nice write up ... keep em coming.