After the delicious success of her chicken fried steak recipe, I went right back to the Homesick Texan’s site to see what other trouble I get could get into. It just so happened that she had a recipe for spicy pickled okra on her homepage, and with a glut of okra from the garden, I knew I had to give it a try.

This is a pretty straightforward recipe, and after sterilizing four pint mason jars, I was ready to add the ingredients. 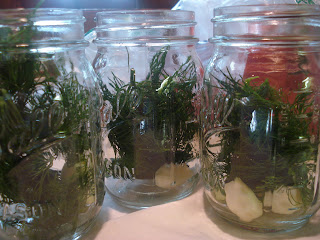 Here 1 cup of dill, 8 garlic cloves, and 4 serrano chilies with stems removed are distributed equally among the four mason jars. Since I had a few extra serranos from the market, I added an extra pepper to two of the jars.

Next it was time to evenly distribute my two pounds of okra. 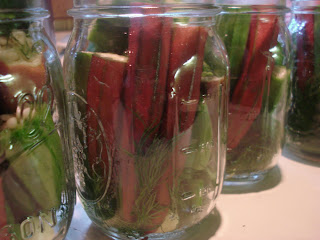 I made sure to use red okra for the color, but I misread the recipe. Instead of simply trimming the okra stems, I removed them completely. This made for an interesting end product.

Now it was time to make the pickling liquid. 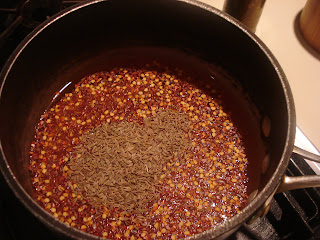 I added 3 cups of apple cider vinegar, 2 teaspoons chilie flakes, 2 teaspoon cumin seed and 4 teaspoons salt to a pot, and then set it 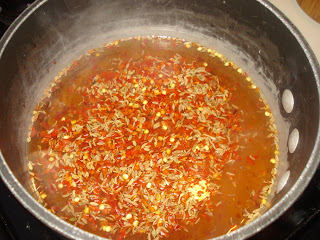 Everything was brought to a boil and moved quickly to the mason jars. 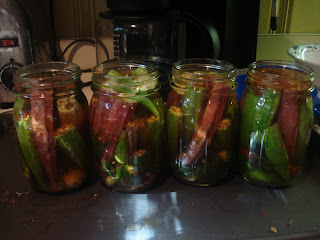 It took a little effort to pour things evenly, but I each jar got its fair share of the brine. 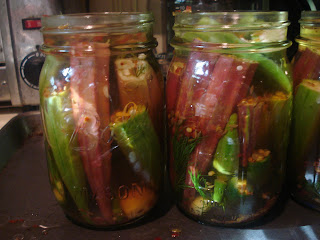 Per the Homesick Texan’s instructions, I filled the jars to the top with water.

With the lids on, all that was left was the waiting.

A few days later, I came back to the okra to see how things had progressed. 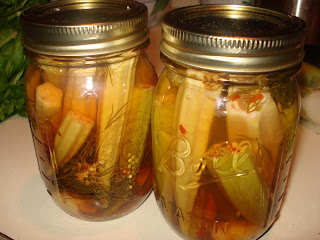 I was completely surprised to see that all of the red okra had been completely bleached, making it a rather ghostly and unappealing white. Still, I opened a jar and was nearly knocked over by the smell. I don’t do much pickling, but I’m sure I’ll get used to it. As I mentioned before, I had cut the tops off the okra, so all of that okra “slime” had seeped into the brine. So with each piece of okra, there was a trail of brine. Still, I persevered and was delighted to find the okra crunchy and extremely tasty and more than a little pungent. As much as I enjoyed the texture, I’m not sure how often I’ll return to pickling okra, but I’m glad I tried it.