I’m always on the lookout for a good chicken recipe, especially since I have a baker’s dozen of kosher chickens in my freezer. Conveniently, the September issue of Bon Appetit had a cover story on their “Top 10 Chicken Recipes”.

As I was leafing through the recipes, Sfoglia’s recipe for “chicken al mattone” caught my eye, as with most any cooking involving a brick. The recipe calls for the chicken’s backbone to be removed. I’ve tried something like that before when I spatchcocked a chicken.

That recipe turned out pretty well, but when I read that this recipe was done indoors, I decided to give it a try.

Like many recipes, this one starts with a marinade. 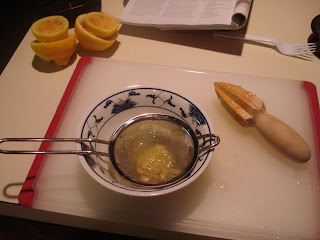 With a little help from a juicer and a sieve, I soon had plenty of lemon juice. 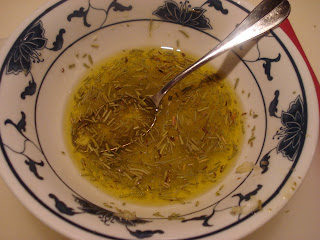 You might notice that’s 1 ½ teaspoons of chopped, dry rosemary. What can I say? It was late and I didn’t feel like running out to the grocery.

From there, the idea is to take the marinade and rub over both sides of your backboneless chicken. 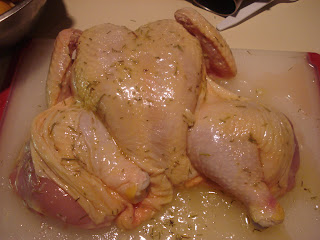 I didn’t feel like trying to remove the keel bone, so I took Bon Appetit’s advice and pressed down on the breast bone until it was flat enough.

Working with frozen chickens takes a fair amount of planning. Seeing as I’d already waited for the chicken to thaw and come to room temp, I had no intention of letting the marinade sit overnight. 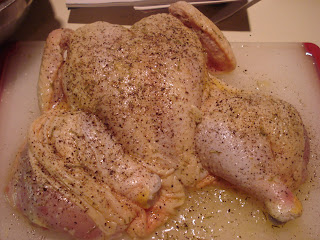 Instead, after ½ hour or so, I liberally applied salt and pepper and then added 1 tablespoon of olive oil to one of my cast iron skillet.

Once the oil was hot, it was time to introduce the chicken to the medium-high heat. 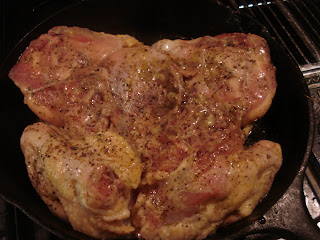 Per the instructions, I had placed the chicken skin side down, and now it was a waiting game.

As soon as the 7 minutes of cooking were up, I got my chicken ready for the 400 degree oven. 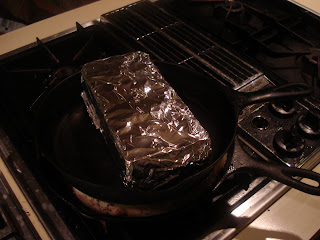 Sfoglia’s recipe says to use either a brick or a cast iron skillet to hold down the chicken. I used both, I didn’t want any run away chickens in the kitchen.

After 30 minutes in the oven, it was time to survey the damage. 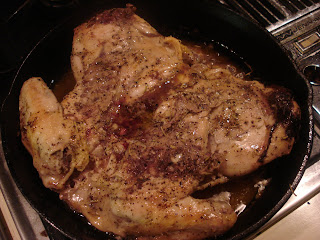 When I flipped it over, the chicken looked even better. 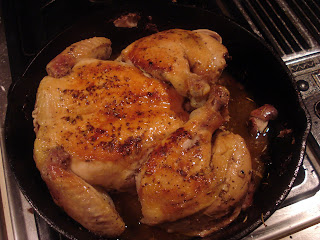 Now it was time to return the brick/pan to the chicken and cook on the other side for another 15 minutes or until the juices run clear when the thigh is pierced.

In seeming no time at all, the juices ran clear and it was time to for the final stage. 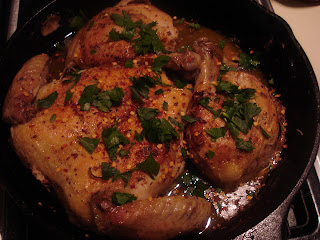 The last steps of the recipe are to drizzle the chicken with 2 more tablespoons of lemon juice and sprinkle with crushed red pepper and parsley. 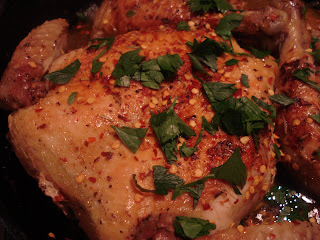 All presentation aside, the taste is what really matters and this recipe was dynamite. The chicken was moist and the parsley and red peppers went perfectly with the lemon flavor. I was such a fan of this recipe that I made it again the next day. In fact, this recipe is close to rivaling Jennifer McLagan’s simple roast chicken recipe as my go to for chicken.

how lovely is to see this chicken ready to introduce it to the oven, I am really sure to eat just a little piece of this delicious chicken as a must. Buy Viagra Viagra