One benefit of this recession is the price of lobsters has hit rock bottom. So when I saw lobsters at the grocery last Sunday, I decided to pick one up. I’ve had Eileen Yin-Fei Lo’s “My Grandmother’s Chinese Kitchen” for some time and there’s one recipe that has really stuck out for me, the lobster steamed with ginger. The first time I read the recipe, I thought it sounded exactly like the lobster Cantonese from the Golden Dragon. So with my lobster on hand, I decided to give it a try.

Like most Chinese recipes, this one begins with a marinade. 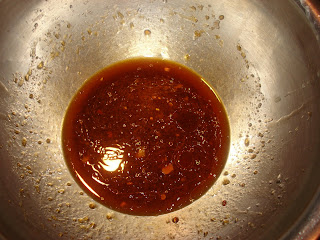 Now it was time for the hardest part, cutting up the lobster. 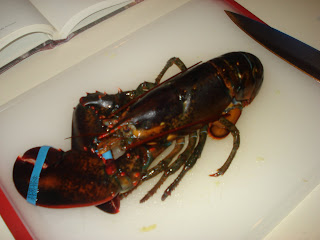 I’ll admit, this is the first time I’ve tried to cook a lobster without steam. So, I needed to kill the lobster before I could cut it into pieces.

With the tip of my knife at it’s head, I plunged in and then pulled it forward. I knew there would be muscle reaction after the fact, but it’s still a little unnerving the first few times. 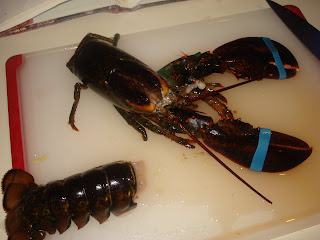 I immediately pulled him apart

From there it was time for my grandfather’s cleaver to cut everything into bite-size pieces. 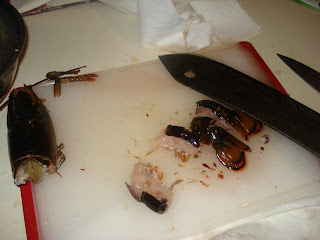 A piece of steel this heavy made quick work of the tail. I think my grandfather would be proud.

The lobster was tossed in the marinade and left to rest for 30 minutes or so. 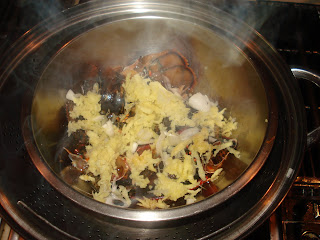 When the time was up, I had my steamer ready and I put the bowl of lobster and it’s marinade inside. For that extra boost of flavor, the recipe called for 3 tablespoon of shredded ginger, 2 scallions (white portion only, cut into 1 ½ inch lengths and then shredded), and coriander springs. I have no idea where to get coriander sprigs.

After about 12 minutes of steaming, I opened the lid to see how things were looking. 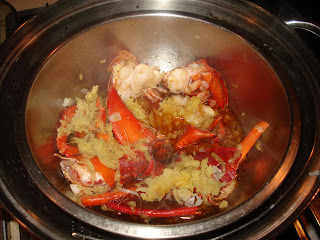 Cooked lobster really is the most brilliant of reds.

From there it was time to pick the lobster meat and serve over rice. 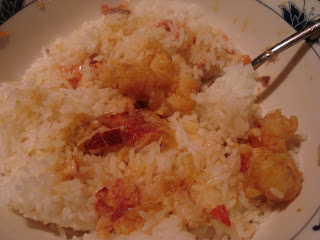 I was supposed to garnish with coriander leaves, but no harm no foul here. The lobster was a little bit of a papershell but the dish was a real winner. I was a fan of the kick of the chili oil, but I’m curious to see what it would be like with the intended scallion oil. Needless to say, Lo had printed a fine recipe, but I’ve got my eyes on some of her dumpling recipes. Just how hard is it to make your own siumai?

Coriander sprigs = cilantro, correct? Or am I way off base?