I originally stopped at Paul Anthony’s for a few packs of Nueske’s bacon and two Boston Butts, but I left with another piece of porcine goodness. 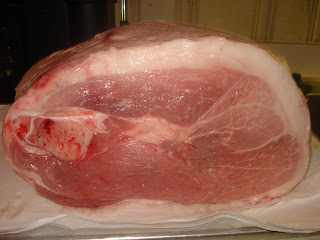 That’s a green ham from a cross of Duroc and Berkshire pigs from a small Amish co-op in Madison, Alabama. You just don’t see marbling like that in pork, so of course I had to buy it.

Of course, there’s just one problem with buying a green ham; I had no idea what to do with it. I immediately thought of looking on the egg head forums, a place for Big Green Egg fanatics, but I didn’t feel like brining and smoking this ham. Eventually with a lot of advice from Pisceschef and a little bit of searching, I decided to make lechón asado.

Usually lechón involves roasting a whole pig, thankfully there are recipes that have been scaled down for one ham. Instead of starting with a brine, the lechón asado starts with a marinade. 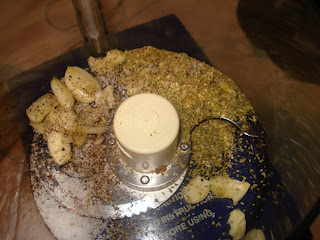 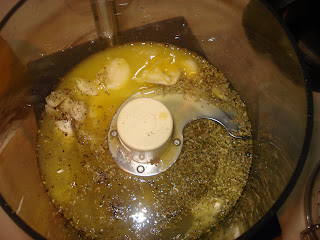 The next step called for ¾ cup of sour orange juice. Since sour oranges aren’t too common in Mississippi, I added ½ cup of orange juice and ¼ cup of lime juice. 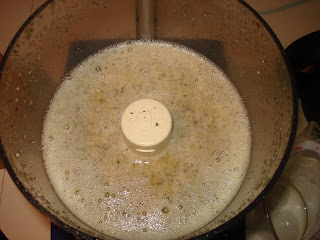 Everything was then pureed for a nice smooth texture. However, I soon realized that I would need more than batch of marinade for a 12 pound ham, so everything was tripled.

Moving to the ham, I first made sure to wash it off 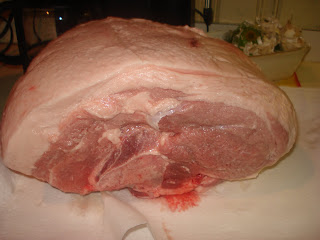 With a fat layer that thick, I thought it would be better to give it a few cuts to let the marinade in. 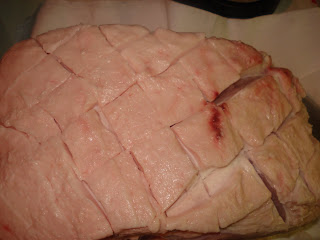 Pisceschef also reminded me to prick the ham with a fork, just to make sure the marinade can really penetrate the meat. 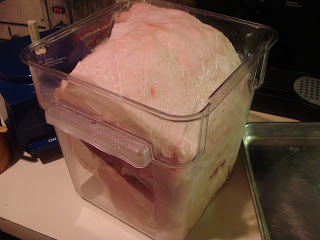 I’m really glad I got these plastic containers in Atlanta. 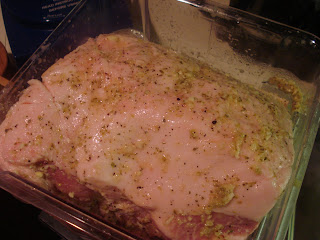 Everything is covered in marinade. 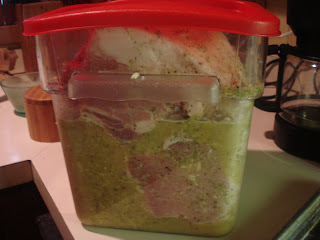 I put the ham in the marinade at 4 or so in the afternoon. Before I went to bed, I flipped the ham over to make sure every piece gets a full dose of flavor.

The next morning, I pulled the ham out of the fridge to see how everything looked. 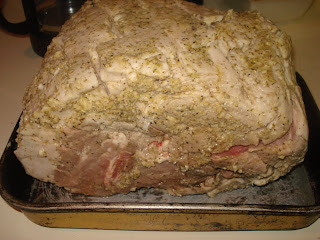 No complaints so far.

I left the ham on the counter to come to room temperature while I got my egg ready for cooking. 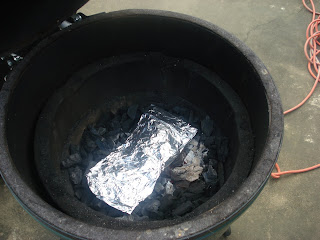 I didn’t want to completely smoke the ham, but a little pecan smoke can’t hurt. Instead of just throwing the chips on the wood, I decided to try a double lined pouch of aluminum foil.

As soon as the grill stabilized to 350, I retrieved the ham and carefully placed it on the grill. 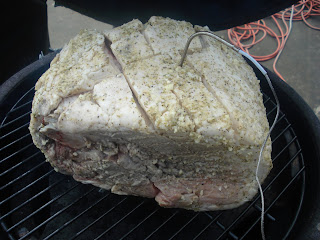 From there it was just waiting for the internal temperature to reach 155.

After 5 or 6 hours, I pulled the ham off the egg and tented it with foil. An hour or so later, I pulled the foil off to reveal my work. 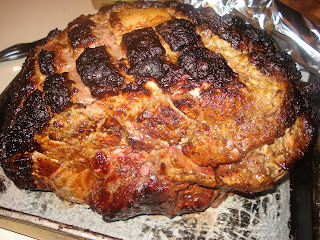 It looks like a significant portion of the fat had melted, but when I went to cut it… 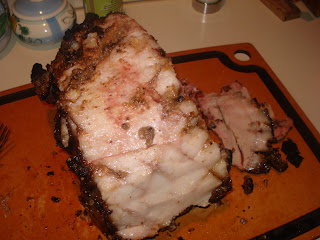 There was still a mountain of fat to trim.

With a few pieces sliced, I decided to go for a taste. 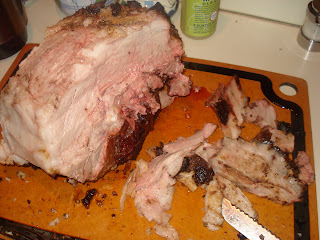 This is not a taste I was used to. I had to take a step back and think about my conception of ham. Nearly everyone has an idea of ham being salty and sweet, but those are cured hams. This was a green ham turned into lechón asado and it was delicious. The marinade was subtle, but those flavors were in every piece of the ham.

It took some work, but I eventually had the whole ham carved up. 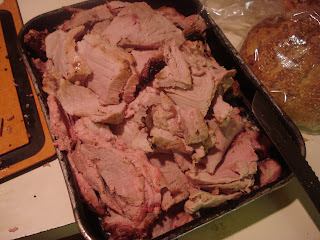 Of course, I couldn’t keep this all to myself. Soon, after I delivered samples to the usual suspects, the rave reviews began to pour in. This was another successful endeavor, thanks to Paul Koury and his butcher shop and Pisceschef for some sterling advice.

I can't believe you didn't call me with this. I'm hurt. Really hurt.

You'll have to do it again sometime and do Cuban sandwiches out of it. Lechon asado is the key to a good cubano!