Twitter is an odd nut. On one hand, it’s completely narcissistic. It take a lot of gall to think that people want to hear about everything little thing that you do. On the other, it’s a great way to get some news out quickly. Fortunately near the end of July, Sal & Mookie’s put out a tweet about a Sam Adams dinner.

Moving forward to August 3rd, it was the day of the beer dinner. Luckily my old friend Stephen was more than happy to take Sam’s spot at the dinner.

In order to accommodate a crowd of 50+ people for a family style dinner, Sal & Mookie’s had been rearranged to have two long tables with chairs impossibly close together. After claiming our seats and a little extra space, the dinner started off with a brand new beer. 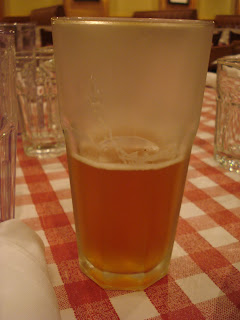 Sam Adams has taken another step into the world of fruit based beers with a blackberry witbier, and it immediately reminded me of an Abita purple haze. Stephen was quick to point out that this was much better than the Abita, I’m not so sure. Either way, this was an great beer to start the meal.

While we were waiting for the rest of the crowd to shuffle in, packs of Sam Adams hops were handed out. 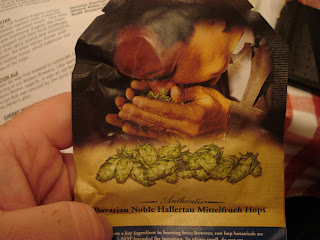 I smelled hops before, but I’ve never seen them packaged like this. 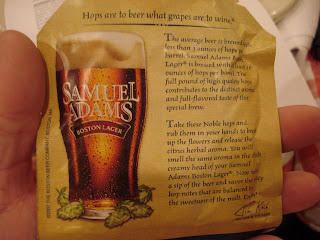 It’s comforting that Sam Adams is so proud of their ingredients that they’ll give out samples.

Once most everyone had arrived, Jeff Good started off the show by introducing the host, Nick Colligan. 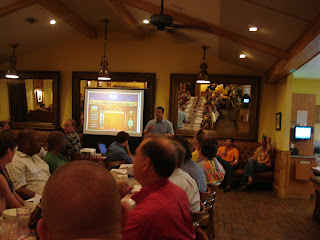 I’m still not sure how a Cajun boy got a career as a Sam Adams rep, but the man knows his beer, and he was more than happy to field any and all questions about Sam Adams.

After the introductions, it was time for the first of five courses. 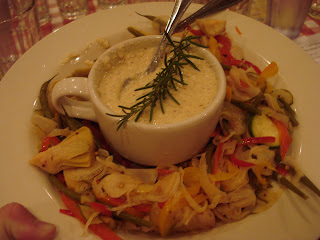 The idea is that each course features a different Sam Adams’ beer, in this case the pale ale is featured in a cheddar mousse with pickled vegetables and crostini. 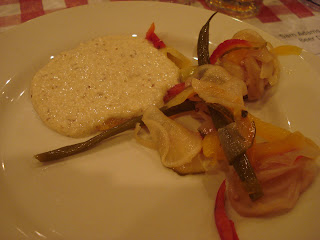 Even though this was an oddly grainy mousse, it really did showcase the flavor of the pale ale.

The second course was definitely the hit of the night. 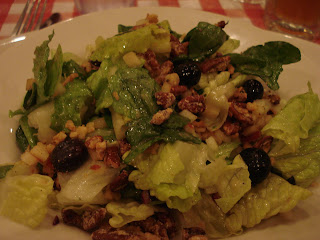 Here we have an apple, romaine, and spinach salad with summer ale-apple cider vinaigrette. 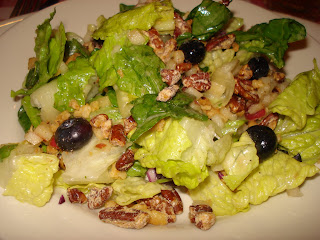 It’s not often that people go back for seconds of a salad, but in minutes every salad platter was empty. I’m still waiting to see if this ends up on the Sal & Mookie’s or Bravo menu, it was honestly that delicious.

With every salad demolished, we moved on to the honey porter braised beef short ribs over smoked gouda soft polenta. 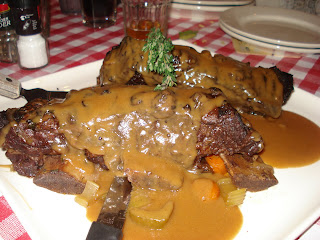 You can rarely go wrong with braised short ribs. 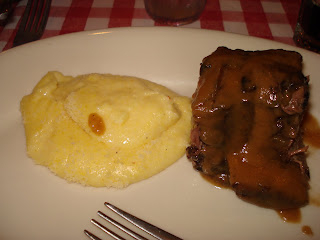 Stephen and I were both surprised at just how much gouda flavor there was in the polenta. By contrast, we were equally surprised at the lack of real honey porter flavor in the ribs. Even without a lot of beer flavor, the short ribs and polenta were stellar.

The second entrée was in a completely different direction from the short ribs. 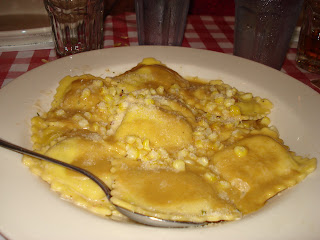 With this dish, Maryland blue crab ravioli are served in a roasted corn-madras curry cream. Contrary to what our menu said, this dish was made with Boston Lager, not Boston Ale. 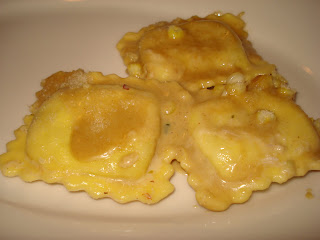 There were enough ravioli for 3 per person, and what a ravioli. Sure they might have been a little doughy but they were chock full of crab, and the curry cream sauce was delicious.

What would be a big family style dinner without dessert? John Good described the cherry clafoutis as a French style cobbler. 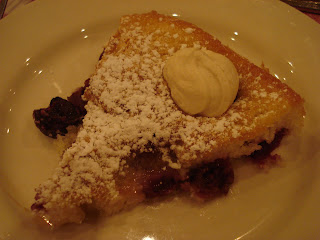 The funny thing about the cherry clafoutis is that everyone was talking about how to pronounce it. Thanks to years of studying French and a few episodes of Good Eats, I was on the ball with the pronunciation. 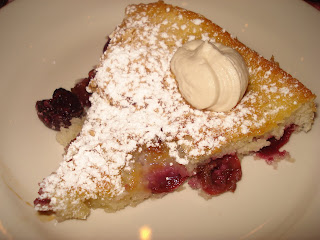 Aside from the funny name, this was a dynamite dessert that only got better with the addition of cherry sauce. 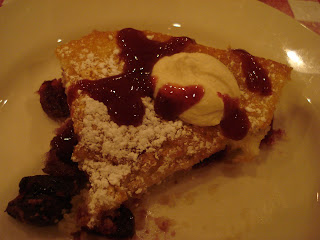 Made with Sam’s cherry wheat beer, this was dessert was rich, decadent and simply amazing. 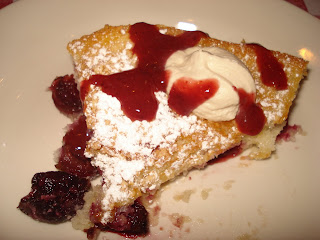 Of course, an amazingly thick sauce only made it better. My only real suggestion is that this might have been better served warm.

As if the stellar dinner wasn’t enough, Nick Colligan had brought everyone a Sam Adam’s Boston Lager glass. 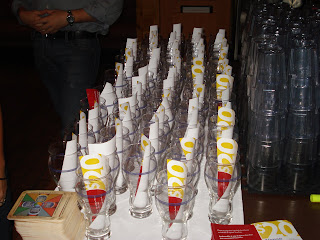 Nick went into great detail about how this glass was especially designed for Boston Lager (at a 7 figure cost). He also explained how there were subtle touches like the lip on the rim of the glass was supposed to pour the beef over the tip of your tongue first so you can experience the sweetness before any bitter flavors.

All in all, I would have to say that the evening was a resounding success. The salad was far and away the most popular dish, so much so that people were clamoring to take home containers of the salad dressing. I highly commended the people at Sal & Mookie’s, Sam Adams, and Capital City Beverages for hosting such a quality event. I can’t wait for the next one.

For an actual review of Sal & Mookie's, please click here

Wow, Andrew. I'm jealous! One thing that I've really enjoyed about living up here is easily getting all the different varieties of Sam Adams. Love them! Try the black lager if you get a chance. And, should you ever come up this way, we could go to Boston to tour the brewery. Fun!