It’s not often that I take the time to eat at/review a chain restaurant, but last Saturday I found myself at Ruth’s Chris steakhouse in Renaissance, so I figured it couldn’t hurt. It’s been a decade or more since I was last at a Ruth’s Chris, so this was practically a new experience.

To begin, Ruth’s Chris strives to achieve that classic steakhouse feel with plenty of dark woods, soft, leather chairs, and a red heavy wine list. Always a fan of mushrooms, I started the meal with the mushrooms stuffed with crabmeat. 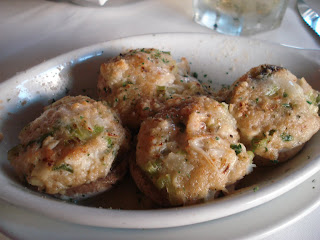 With a heady smell of garlic, I was already enjoying this dish. 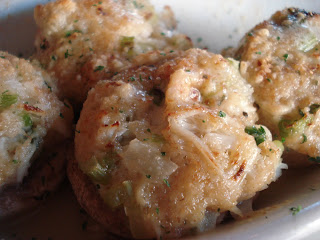 I’ll admit there is plenty of crabmeat, unfortunately, the button mushrooms underneath were completely bland and a little watery. The more of this dish I ate, I noticed how much these mushrooms were in need of a good dose of spice, and a little less celery. 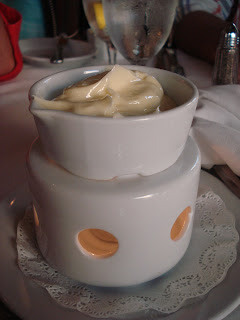 Honestly, who doesn’t enjoy having a dish of to be melted butter brought to your table? 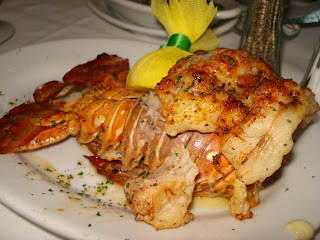 Everything was looking good until I took a bite of the lobster; this was a truly unimpressive piece of seafood. Not only did the tail lack any spice that you would normally associate with Caribbean cuisine, it had an extremely mushy and unpleasant texture. My best guess is that this tail had been frozen and very badly thawed.

I realize that Ruth’s Chris is well renowned as a steakhouse, but when the waitress described the Ridgeland exclusive flounder with crabmeat and asparagus almondine sauce, I had to try it. 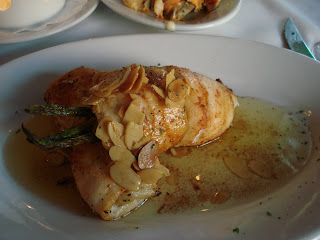 This was my final and worst mistake. Sure the dish is a visual masterpiece, but the flounder had a very mealy texture. 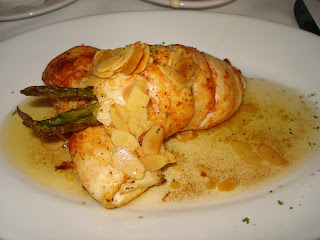 In an effort to cook the crabmeat stuffing, the flounder had been completely overcooked and thus rendered inedible.

Looking to the side dishes, the asparagus weren’t a bad offering. 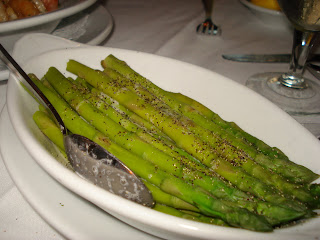 Well cooked, these spears were a little on the bland side and the accompanying Hollandaise sauce didn’t help much. 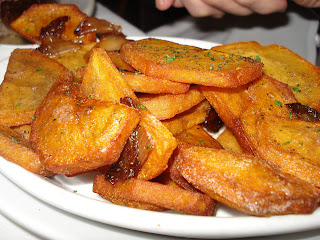 Like the asparagus, these potatoes were well cooked but lacking in most other functions. When the waitress told me these potatoes would be cooked with lots of butter, garlic, and onions, I was expecting the best. 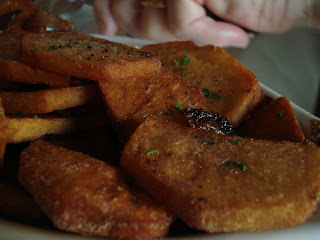 Unfortunately, there’s a shortage of onions and garlic at Ruth’s Chris. Aside from a few visible scraps of onion, I would have believed there were no onions at all.

Fortunately, there was an upside to this evening. My waitress couldn’t have been more gracious and helpful, and when she saw that I had barely touched my lobster and flounder, she went to get the chef. Chef Jeremy Enfinger was very concerned about the quality of his food and was a little surprised when I told him exactly what I thought about the lobster and the flounder. Thankfully, he apologized for the quality and thanked me for the feedback. As a bonus, my lobster and flounder were wiped from the bill.


There’s a moral to this story. When you go to a steakhouse, like Ruth’s Chris, do the smart thing, order the steak. That’s what I’m going to do the next time I’m at Ruth’s Chris.

"There’s a moral to this story. When you go to a steakhouse, like Ruth’s Chris, do the smart thing, order the steak."

I really love eating all this meatballs they are so fabulous and very tasty making unequal its flavor, and so delicious that everyone will desire. Buy Viagra Viagra