The last time I was in New Orleans, I had every intention of trying John Besh’s Restaurant August; unfortunately, a private party had monopolized the entire restaurant. Now I was back in Nola, and it was finally time for me to try Restaurant August. As a bonus, my good friend, Jon was in town and able to join me for dinner. It’s always a good idea to eat with a friend, not only for great conversation, but you’re able to try more dishes.

As soon as we walked in, I was a fan of the atmosphere at August. Of course, I wasn’t at all swayed by the James Beard award plate on the wall by our table. While we were eying the award and the menu, the waiter came by and made some interesting recommendations.

In no time at all, our amuse bouche was brought to the table. 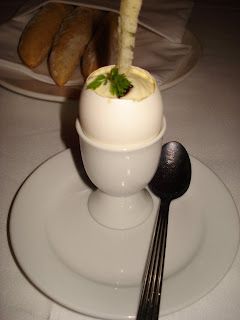 You don’t often see seafood combined with custard, but served with a bit of caviar and a light brioche, it all made sense. With such a thick and creamy custard, I was a little worried about how salty everything was. Fortunately, it was well portioned and the saltiness wasn’t overwhelming. Overall, this was an excellent start to the meal.

We had just enough time to savor the custard when our appetizers arrived. 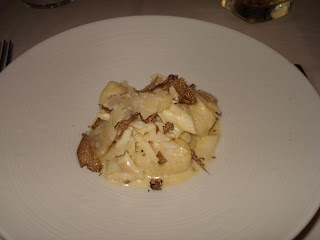 Jon had gone the relatively simple route with an order of the potato gnocchi tossed with blue crab and umbrian truffle. I was able to grab a few bites and the gnocchi was thick and delicious and well complimented by the hearty chunks of lump crabmeat. Compared to my appetizer, it was a simple dish, but it was delightful.

When i said the waiter made some interesting recommendations, this is one of them. Instead of recommending the 4 course tasting menu, he approved of my second choice of foie gras and lobster. 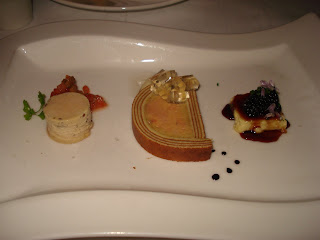 Starting with the foie gras, here it is served three ways. This is a dish that every yelper was raving about and I was extremely excited about the dish but a little confused the presentation. From left to right, there is foie gras pastrami, then a german style cake of kon kutchen (sp?), and on the end is foie gras creme caramel. I decided to enjoy them from left to right and the pastrami was chilled, smooth, and sublime. I’m not sure what made it pastrami, but I enjoyed every second of it. After that is the horribly misspelled foie gras kon kutchen. This was a tasty and hearty breading surrounding a smooth and delicious foie gras. It actually reminded me of a german ice cream cake but with the delectable flavor of foie gras. Last was the foie gras creme caramel, and this was another odd contrast of flavors. The sweetness of the creme was oddly compatible with the irony flavor of the foie gras. Even better was a bite of everything with the blackberry, a real delight. As much as I loved the menagerie of flavors on this plate, the best thing about this dish was the cost. At only $20, I can think of few better deals.

Of course that wasn’t the last of our appetizers, I convinced Jon that we had to try the plate of Louisiana seafood 3 ways. 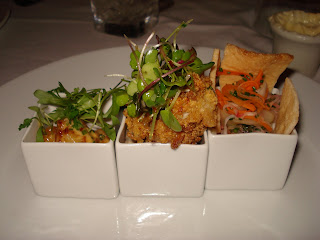 First on the left were the salt baked shrimp with a garlic chili crust, and these shrimp were beautifully cooked with a good amount of spice and a great cream sauce. The oysters in the middle were cornmeal dusted and served with a Louisiana caviar “ranch” dressing. Like the shrimp, these oysters were perfectly cooked. Not too crispy, but not too mushy, the oyster was allowed to stand on its own, but the “ranch” sauce at the bottom was like a delicious remoulade that more than complimented the oyster. Lastly, the crab was served as a chilled salad with shrimp chips. At first I thought the dressing had overpowered the crab, but it quickly evened out. There was a nice touch of ginger to the salad, but like the other two, the seafood was the star.

After our wonderful trio of appetizers, it was time for the entrees. 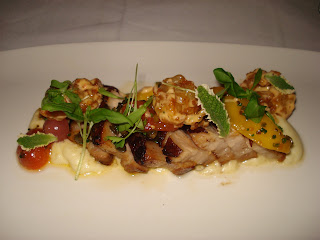 This entree and the foie gras were recommended over the tasting menu, and who wouldn’t want to enjoy local pork belly and lobster with roast peaches, picholine olives, and lemon confit? I decided to go right for the gusto and went for the lobster first. That first bite completely sold the dish, the lobster was moist on the inside, crispy on the outside, and covered in a spicy cream sauce. When you have fried lobster with a cream sauce, what else can you ask for? Pork belly of course! At first the pork belly was melt in your mouth tender, but it was oddly a little lacking in flavor, and I would later find a few pieces that were dry. Even with the hiccup, this was still an excellent entree as the peaches were decadent and the onions were perfectly roasted.

Jon had stayed true to Louisiana and gone with the local softshell “grenobloise” with market vegetables and fresh herbs. 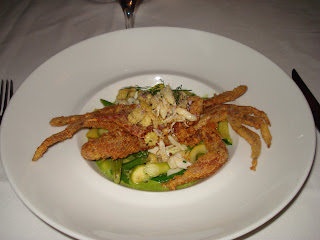 I love the sheer decadence of fried crab that is topped with lump crabmeat, is there any way you can go wrong? Fortunately, no, as this crab was lightly breaded and delicately fried, all in the effort to let the crab shine through. Thankfully the vegetables beneath were just as perfectly cooked as the crab, a real masterpiece of Louisiana seafood.

I suppose the first question should be “was it worth the wait?” Going by the food alone, yes. This was an well cooked meal with excellent ingredients. However the real treat of the night came on the walk to the hotel. Walking down Gravier Street, we passed a man who thanked us for coming. It wasn’t until he passed that I realized it was John Besh himself. After a few quick shouted conversation about Top Chef Masters, Besh thanked us again and walked in the front door. Not only is it a treat to meet a well established chef, it’s comforting to know that he still spends time in the kitchen.

Great site - especially helpful in my planning a trip to NOLA this February.