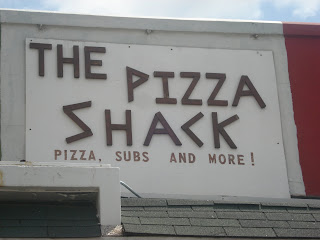 There seems to be a wide variety of pizza options in Jackson. Sure, the coal oven pizza craze hasn’t hit home yet, but we’ve got homegrown options like Sal & Mookies and Soulshine, not to mention Mellow Mushroom and the bevy of typical chain operations. One pizza place that I always seem to forget is Pizza Shack. I’m not sure why, so Sam and I decided to have a quick lunch before hitting the road for Louisville.

I think it was a mistake was trying to make this a quick lunch. The first problem is the extensive menu of specialty pizzas. Ranging from a chicken curry, to cheeseburger to Mexican fiesta, there was so much to choose from. After a few minutes of hemming and hawing, we decided it would be best to share two smalls.

Our second problem was timing. Even though we arrived and ordered before the lunch rush, our pizzas weren’t exactly prompt. However, any aggravation about tardiness went out the window when the pizzas were brought to the table.

First up was the buffalo chicken pizza. 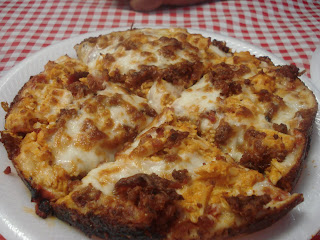 The truth is this pizza tastes just as good as it looks. The numerous pieces of chicken were tender and spicy, just like a buffalo chicken should be. Not only was there plenty of delicious chicken there was a ton of bacon for such a small pizza. The only thing that bothered me was the hot sauce; Sam thought it was Tabasco, I thought Frank’s. A quick questioning of the manager revealed that the Pizza Shack uses Frank’s. I hope that wasn’t meant to be private.

In addition to the buffalo chicken, Sam had insisted we order the pulled pork bbq pizza. 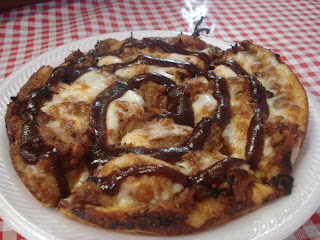 Though I’ve always been skeptical of bbq pizzas, all my fears were assuaged by this pizza. Like the buffalo chicken, this pizza was loaded to the gills with plenty of meat, juicy, tender pork in this case. Not forgetting the bbq sauce, it was a sweet and thick sauce that was a dynamite companion to the pizza and pork.

I was so enamored with my lunch at the Pizza Shack, that I convinced a number of coworkers to order it for lunch the next day. Always a fan of cold pizza, I ordered a large just to ensure there would be leftovers. 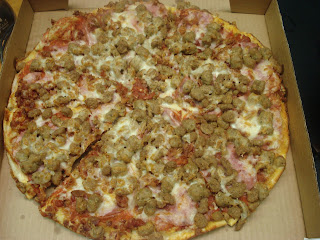 After reading another blogger’s review of the carnivore pizza, I couldn’t resist. 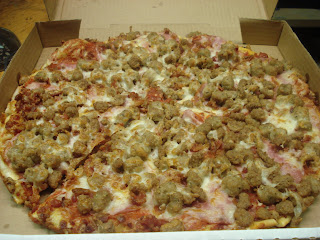 There was something disturbing about this pizza. Sure most large pizza are hefty in their own right, but this pizza was actually heavy, and it’s owed to the sheer amount of toppings. 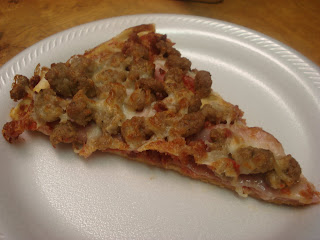 I was finally able to get a taste of a regular pizza and I was delighted to find the tomato sauce to have a nice bit of red pepper. Of course, the main attraction of the carnivore is the metric ton of sausage, ham, pepperoni, beef, and bacon. Kudos to the Pizza Shack for using real, visible pieces of bacon, this is one the few pizzas were you can actually distinguish all the flavors of the various toppings.

Sure, the Pizza Shack isn’t the most glamorous location. It’s true to its name, it really is a shack…of sorts. The ac inside the restaurant really does put up a good fight against the ovens in the back, but it’s an uphill battle. Yes, the wait staff is usually overwhelmed and the pizzas are never exactly prompt, but none of that matters. The wait staff is polite, friendly, and more than eager to help. Most importantly, the pizza is astounding and completely worth the wait.

I really love all this presentation, I am so glad to see them so they are so tasty and delicious and they really make me feel so hungry. Buy Viagra Viagra