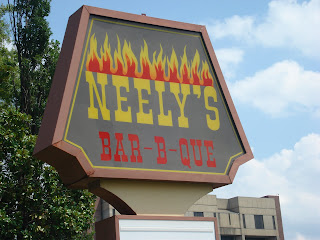 Despite its proximity, it’s not often that I make the drive to Memphis. However, last Sunday my Sister Jennifer and her boyfriend Aaron were at a wedding in Tunica and they needed a ride to Memphis. So we figured why not spend the day in Memphis and assault our senses with an overwhelming amount of bbq?

The first thing that crossed my mind about Tunica was the tamale trail. Unfortunately, the only Tunica stop on trail was closed on Sundays. After I was disappointed by the tamales, we were all crushed to find that Charlie Vergo’s Rendezvous was closed on Sunday, Monday, and Tuesday. Needing a substitute, we decided to drive to Neely’s Bar-B-Que.

I’ll freely admit that I have a hard time watching the Neely’s on Food Network. It’s great to see a couple in love, but it always seems like they’re one step away from forgetting the food and heading to the bedroom. Regardless, I had an open mind about their bbq. Unfortunately, the longer we waited to be seated, the more I lost my objectivity. It took 15 minutes and three people asking if we were waiting for a table before we were seated. If the restaurant had been full, that would have been fine, unfortunately, there was a glut of tables and servers that seemed to be completely unaware of waiting patrons.

Once we were seated the poor service continued. After ordering, we were brought our drinks, in my case the wrong one, and it would be half an hour before our waitress would reappear with a basket of rolls. 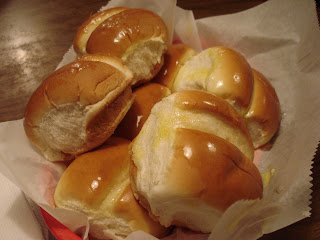 Sure they look buttery, but these were nothing more than grocery store rolls with a good brushing of butter.

We were having a good conversation about what was taking so long. It’s not as if bbq is cooked to order. We were closing in on an hour since we walked in before out waitress magically appeared with our food. 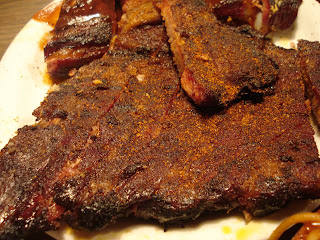 Hoping to get the best of both worlds, we had our rib rack served half dry rub and had wet with sauce. The dry rub ribs were up first and they looked promising. There was a decent amount of rub, unfortunately my first rib was bone dry. The problems just kept coming as the ribs were cooked past their prime. Good ribs have a little resistance when you pull on the meat, contrarily these meat from these ribs fell off at with the touch of a feather. Another downfall was the complete lack of a smoke ring on the ribs 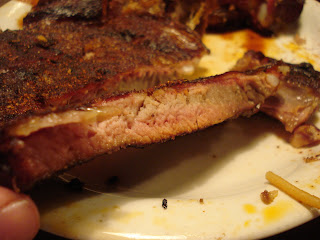 Neely’s Interstate Bar-B-Que claims their ribs are smoked over hickory logs, but you could fool me.

Want to see a real failure? 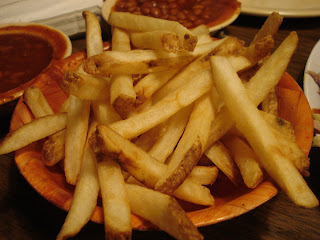 Bland, limp and just all around terrible, I have no idea why these French fries were even on the menu.

Aside from the ribs, I was most interested in trying the Neely’s bbq spaghetti. 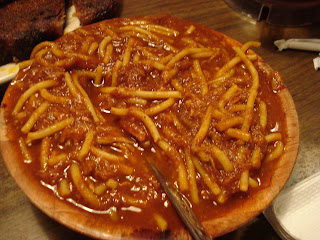 I wasn’t really sure to expect from these ribs, but I was still surprised when I gave it a taste. There is a good amount of tomato flavor, a nice amount of spice, and thankfully plenty of pork. I think Aaron described it best as perfect “stoner food”. I don’t know if I’d order this again, but I’m glad I tried it.

Aside from ribs, the other best known pork bbq is pulled pork. So where would we be without a pulled pork sandwich? 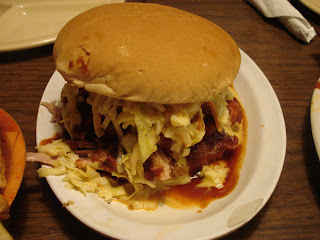 I knew something would suffer from the poor service and this pork sandwich was the victim. It was served cold, but we soon found this was the least of its problems. Each piece of pork was dry with no real smoke flavor. Even the slaw was lackluster. This could be the worst pulled pork sandwich I’ve ever had.

Bbq and baked beans seem to go hand in hand. 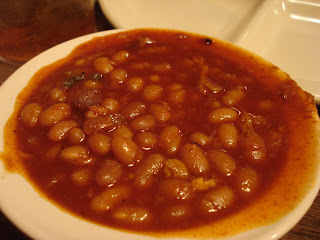 Fortunately, the baked beans are something the Neelys did half well. Sure the jalapeno flavor was a little different, but these beans were still pleasantly sweet.

Last and actually pretty close to least were the wet ribs. 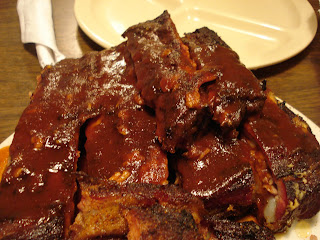 At first the wet ribs seemed to be doing pretty well as there was a decent smoke flavor. However we soon noticed that there was no smoke ring on the wet ribs and that any smoke flavor came in the form of liquid smoke from the sauce. Even with a good dousing of bbq, these ribs were still dry and generally poor.

Needless to say, we didn’t finish our meal at Neely’s. In an effort to hurry our escape, we requested the bill as soon as our food arrived. Unfortunately, even with this attempt at hurrying, we still wasted nearly 2 hours at this miserable place. Before I wasn’t a fan of the Neelys, now I have plain dislike for them. I think my sister’s comment about her tea was very telling: “there’s a fly in my tea”. For those looking for good service and good bbq in Memphis, save your time and money and look somewhere else.

Help a foodie out this isn't Jim Neely's Interstate BBQ is it? I can't imagine it getting a review like this...

I don't think this is the original interstate bbq, but some secondary location.

Andrew I did a little digging on this and it is the same Family, they are Jim's nephew's, but there doesn't seem to be any co-mingling of the money or sauce so to speak. Jim Neely's has been some of my preferred BBQ, and I can't imagine it being like your experience...