I’m never one to turn down a cooking class, so when I saw an ad in the Jackson Free Press about Louie Bruno lunch cooking classes, I signed up immediately.

When I actually arrived at the class last Sunday, I was shocked to not find the usual Louie Bruno setup. There were was audience seating around a range. There was no band. Most importantly, there were no high proof alcoholic beverages. Fortunately, Louie did have an appetizer ready for us. 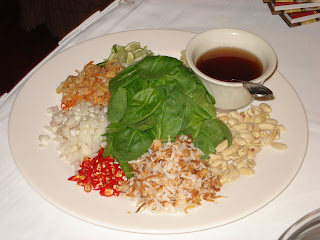 This little “some assembly required” dish is called meing kum. The idea is to take a spinach leaf and then put a little of each ingredient on the leaf. With the toasted coconut, salted peanuts, ginger, shallots, limes, Thai chilies, and dried shrimp added to the spinach leaf, you end up with something like this. 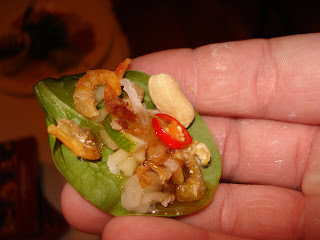 Add a little spoonful of mieng kum sauce and you’re good to go. Each one of the little packages really was a symphony of flavors, with a fair amount of heat if you added the right number of chilies.

As the class was enjoying the mieng kum, Louie explained that this was going to be a learning class, not just a plain old demonstration. He believes that you don’t really learn anything that way, so everything was going to be cooked by us, the students. It’s a bold idea, and one that could end in disaster, but I was more than to start the prep work. 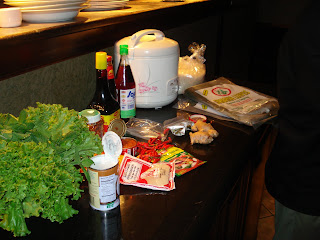 First, Louie gave an little introduction to some of the ingredients we’d be using that day. I found them all a little pedestrian, but I had to remember that not everyone grew up going to Chinese groceries on a regular basis. 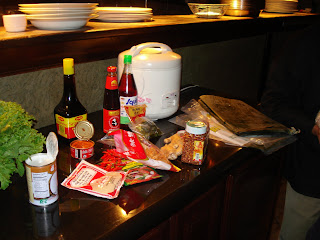 Now it was time for each group to start working. 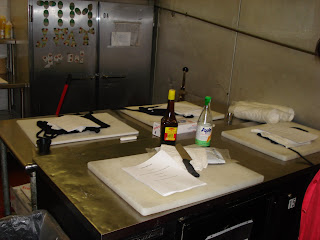 Here was my group’s station in the back. We decided to start in the front of our recipe packet with the Thai grilled eggplant salad. 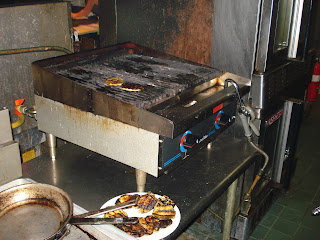 Here the 2 eggplants have been peeled, cut into rounds and sent to the grill to be slightly charred. 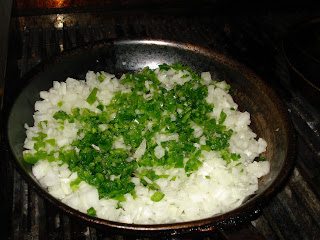 In the meantime, the onions, poblano peppers, jalapenos, and garlic were sautéed. While that was going on, Louie came back to the grill and was showing a fellow classmate how to grill his chicken satay. 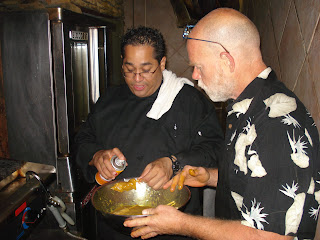 I knew to spray the grill with oil, but I didn’t think to spray the satay. I guess you learn something new every day. 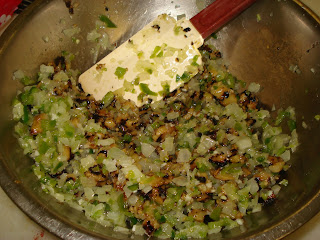 With the eggplant diced and the onions & peppers cooled, everything was added together. 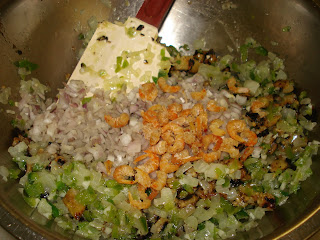 However, you can’t forget to add the shallots and dried shrimp 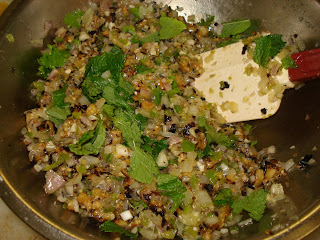 Or the mint and cilantro leaves. 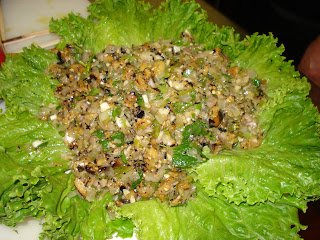 In the end, my group had a pretty stellar Thai grilled eggplant salad.

As much as I enjoyed the grilled eggplant salad, the Thai beef lettuce wraps were the real stars of the cold appetizers. 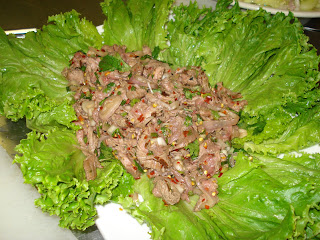 Yes, my group added more than the “recommended” 1 teaspoon of red pepper flakes.

Moving to the hot appetizers, the chicken satay and spicy peanut sauce was a real treat. 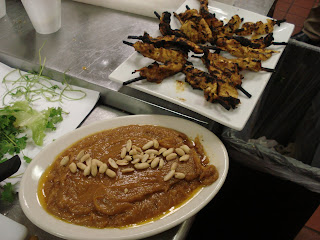 Deceptively easy to make, the biggest trick is keep your skewers from burning away. 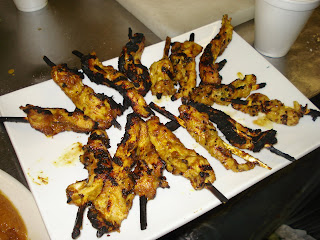 Even with disappearing skewers, the satay were a success.

Another dish I missed the prep work for was the thai cucumber salad. 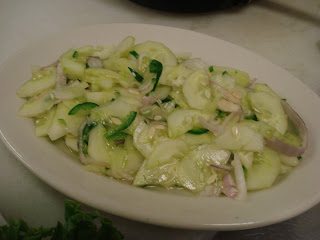 Every time I get food from the Thai House, I get a small order of their cucumber salad. Now I know their secrets!

It seemed that everyone was doing their best to avoid the last dish, grilled banana leaf-wrapped fish with red curry sauce. I nominated my self to make this dish, and it all started simply enough. 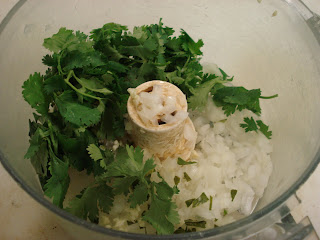 First I had the take onions, garlic, cilantro, and kaffir lime leaves and throw them all in a food processor. 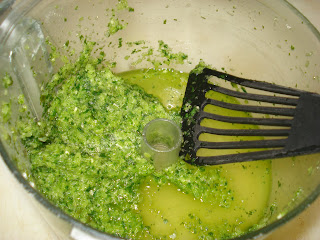 After a few minutes of fighting with the food processor, I ended up with a lovely green paste. This paste went straight to the range where it was sautéed until the “aroma is released”. I love vague instructions. 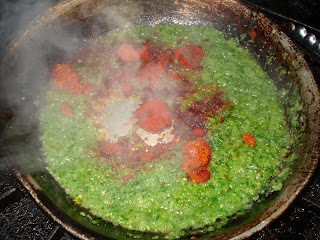 When the aroma had been freed from its prison, I added in red curry paste and paprika. 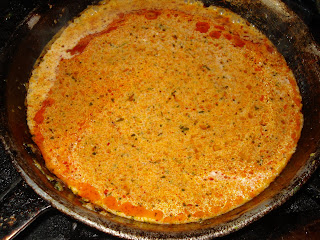 With the addition of coconut milk, sugar, and fish sauce, this was beginning to take an oddly familiar hue. 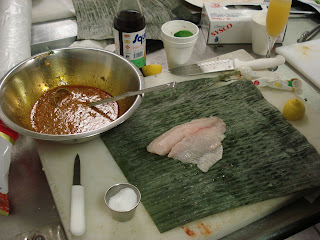 Moving on to the fish, after being washed, dried and seasoned with lemon juice, salt and pepper, it was time to add the curry sauce. 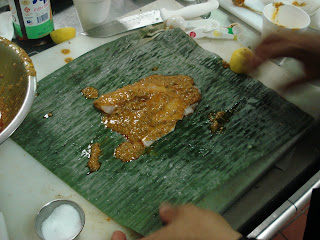 Here Louie is showing me how to sauce the fish. 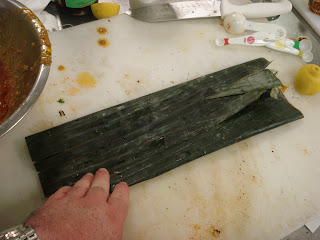 Everything is then wrapped in banana leaves 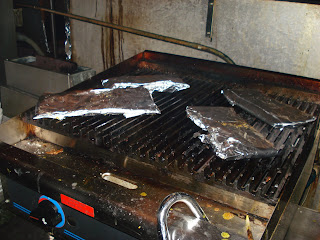 And finally shown to the grill. 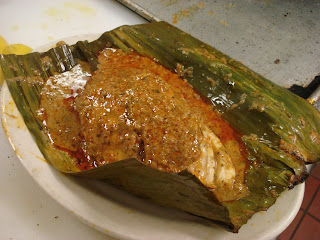 After 7 or so minutes per side, I had a beautifully cooked fish.

With all the work done, the entire class was able to enjoy the fruits of our labor, family style. While everyone was eating their fill, it gave us all a chance to discuss the class with Louie. Louie informed us that we were the guinea pig group for this style class and while the majority of us enjoyed it, there were some who came away very disappointed. On the whole, I enjoyed myself thoroughly, and this class reminded me that I need to start cooking from Louie Bruno’s cookbook more often.