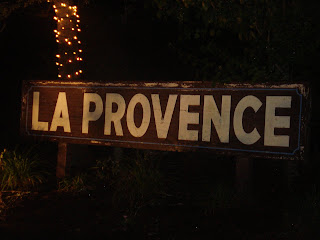 It’s not often that I make the long trip across the Causeway to the North Shore. In fact, I’ve only been one time and that was to go on the Abita Brewery Tour. Now I’m making the substantial drive from the CBD to Lacombe, all in the pursuit of trying out John Besh’s La Provence. Actually the restaurant wasn’t started by Besh, it was started in 1972 by his mentor John Kerageorgiou. With Besh as the owner and Chef Eric Loos at the helm, I had high expectations.

After parking and being seated, I was delighted to see something unique brought to the table. 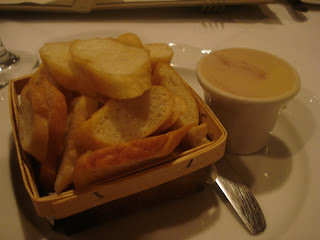 Instead of the usual dish of butter and French bread, the meal starts with toast points and rabbit liver pâté. 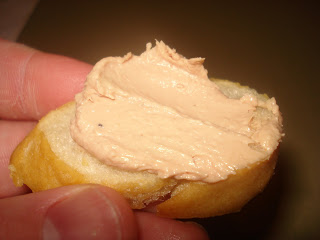 Not only were the toast points buttery and delicious, I’d be hard pressed to find a finer pâté. It was smooth, rich, creamy, with no real irony taste, all important things for a liver pâté, but most importantly, it was completely decadent. I wish every meal started with toast and pâté, the world might be a better place.

What would be a meal without a good cocktail? 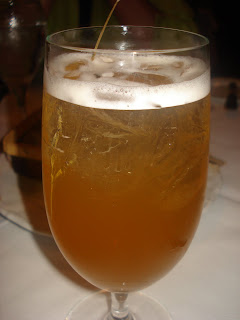 Luckily La Provence is known for their cocktails. Pictured is their take on the classic French 75. Not a bad representation, especially considering it’s nothing but gin, champagne and lemon juice. The lavender twig is a nice touch.

I was being terribly indecisive, so I decided that two appetizers were a must. The first up was the escargot au pistou. 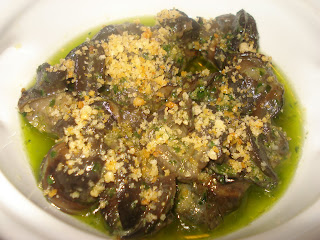 This was a different take on escargot, a departure from the usual escargot Bourgogne. Here the snails are served with herbed bread crumbs and pistou, essentially a pesto without the pine nuts, and there was a lot of it. The snails were extremely tender and very well cooked, and while there was loads of garlic in the pistou, I just wasn’t a big fan. I realize that pistou is a very Provencal sauce, but I prefer the more northern Bourgogne.

For a second appetizer, I decided to for Chef Chris’ quail gumbo, because it’s rare to see quail in gumbo. 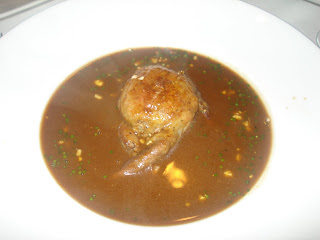 The presentation for this dish was a real surprise. Instead of the traditional pieces of quail distributed throughout the gumbo, the quail was served whole and stuffed with dirty rice. 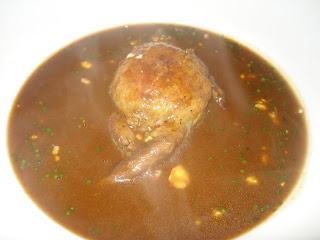 When you take a closer look, you can see that’s an exceedingly stuffed quail. Moving on, the gumbo was essentially perfect, with an incredibly rich flavor. The quail wasn’t far behind with well cooked meat that was perfectly complimented by the deep liquid. Even though it was a little tedious to cut up the quail, I didn’t care, it was just so rich and spicy.

Even though we’re still on the edge of bad season for oysters, I couldn’t resist a few charbroiled oysters with café de Paris butter. 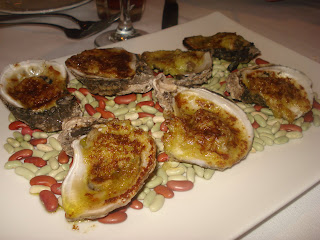 Like everything else, these oysters were cooked to perfection. I know I’m sounding repetitive, but when it’s all cooked so well, there’s just not much else to say. Anyway, these oysters and their butter & breadcrumb topping were just fantastic.

Moving on to the entrees, the hits just kept on coming. 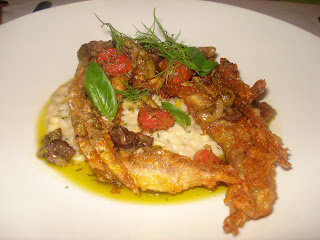 This gigantic soft shell crab would have been fantastic on its own, as it was lightly battered and fried to perfection and tasted just a little sweet, but they went ahead and added a risotto. Not only was the risotto expertly cooked, it was swimming with the pungent flavors of olive, and there were chunks of house smoked bacon that just drove everything over the top.

Next was a classic dish, a filet of beef tenderloin. 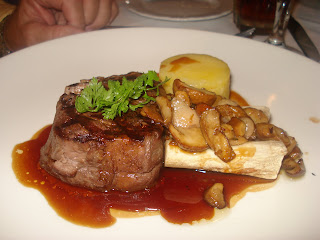 If you look to the right of the filet, you’ll see half a bone with mushrooms on top. The waitress told me that the heat from the mushrooms melted the marrow and helped make the sauce for the steak. That’s a stroke of genius as every piece of the piece of the tender, amazingly cooked filet had an amazing depth of flavor.

After a quick discussion with the waitress about the lamb and the rabbit, I ordered the slow cooked whole baby lamb for my entrée. 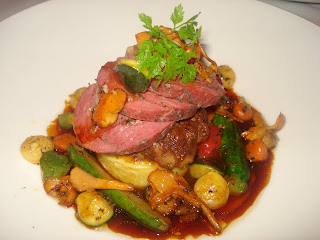 I was actually expecting a whole lamb on a platter, but this dish was more than delicious. 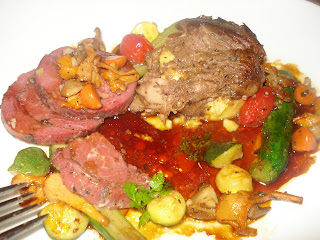 With everything deconstructed, you get a chance to see the two separate cuts of lamb. On the bottom the braised lamb was unctuous, tender, and had an amazing flavor. Originally on top and now to the left, the leg of lamb was a stellar medium rare that was amazing with the pan sauce. Not to forget the supporting cast, the zucchini, cippolini onions, and chanterelle mushrooms were all delicately cooked and provided a great support to the lamb.

To most people that would have been enough, and we would have agreed, but we were easily swayed to try a dessert or two. 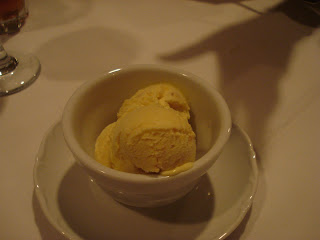 First was the house peach ice cream, and as you would expect it was rich, delicious and overflowing with peach flavor. Unfortunately, I was a bit underwhelmed with the presentation. I was expecting more than just a few scoops thrown into a bowl.

Looking to try a very “French” dessert, I immediately chose the cherry clafoutis. 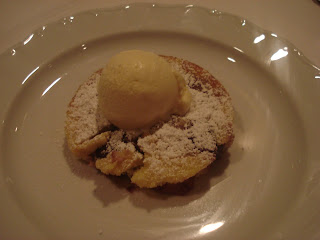 This was right back on form with rich, plump cherries in a well cooked dough. Being served a la mode is always a plus, and the house vanilla ice cream was a delightful compliment.

I suppose the first question I’d ask is was it worth the drive? Yes, I would actually drive from Jackson just to eat at this restaurant. The food is that divine and the wait staff is knowledgeable, helpful, and extremely charming. As much as it sounds like a cliché, La Provence really does seem like a slice of southern France on the north shore. It looks like I’ll be making the drive across the causeway much more often.

good grief! You must be a big boy, eating that much!

Oh, and it's Chef Eric Loos