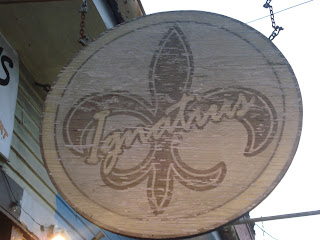 Dinner at Ignatius was really by accident. The idea was to meet Jon and Stephanie at Janitas and then make it out to a New Orleans Zephyrs game. However, our plans were soon thrown for a loop when Jon called me. Apparently Janitas had completely disappeared from the map. There wasn’t even an empty store front. Fortunately, the ever resourceful Jon had another idea for dinner.

Ignatius Eatery and Grocery is a relative newcomer to Magazine Street, but it’s already made its mark by being voted “Best New Restaurant” in 2007 and “Best Lunch Place” in 2008. I loved the fact that it’s the epitome of that Magazine Street style and the fact that Ignatius celebrates “everything nola”

With the walls lined with New Orleans products, I felt it would be a little uncouth to order anything but a Louisiana beer. 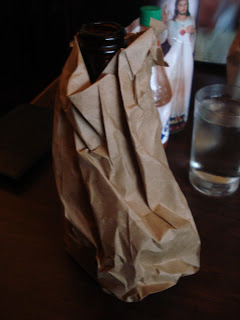 I found it highly amusing that each of our beers were served in a brown paper bag. It’s like the original coozie and I thought it added a certain something extra to my Abita Restoration Ale.

Since Stephanie was still a newbie to Nola cuisine, I decided to order a few Louisiana specialties for the table. 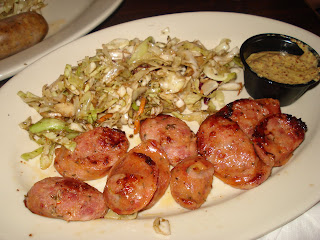 Grilled alligator sausage seemed like the perfect way to start. Not only was this sausage tasty and spicy, you could tell there was a delicious amount of pork fat in this sausage.

Another Nola favorite was brought at the same time. 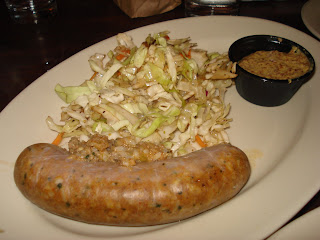 Poche’s pork and jalapeno boudin was a little confusing to Stephanie, but Jon and I were more than happy to show her the way. After wrestling with the casing, we each got a few pieces of the boudin and I had an extremely odd revelation. This boudin tasted like what Popeye’s cajun rice should be. I know that Popeye’s cajun rice is an odd comparison, but it just seems to fit.

As far as entrees, I decided that it would be hard to go wrong with a classic crawfish etouffee. 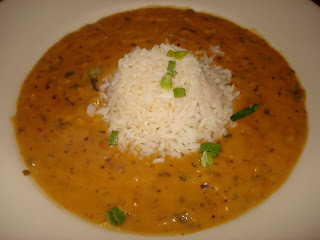 I was surprised at just how creamy this etouffee was, something I rarely see with my own etouffees. Nevertheless, this was a rich and well seasoned dish with a nice amount of heat.

With Stephanie’s dish came a little discussion of pronunciation. 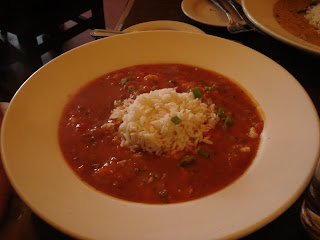 After explaining that it’s pronounced creole not creolé (it’s all about the accent mark), Stephanie’s shrimp creole was brought to the table. Stewed with a creole red gravy and vegetables, this was a well seasoned dish. Even with a fair amount of seasoning and evidence of the trinity, I couldn’t shake the idea that this tasted like plain tomato sauce. Regardless, the shrimp were well cooked and more importantly, Stephanie really enjoyed the dish.

Last and batting 1.000 for the day, Jon ordered the best of the three entrees. 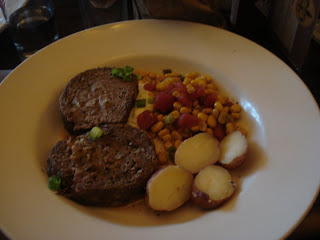 Boudin meatloaf is delightfully simple idea. It really is nothing a link of boudin that has a meatloaf formed around it. This was a delicious and a really beautiful combination and some of the best meatloaf I’ve had in some time.

I never like to celebrate the demise of a restaurant. I enjoyed my sole visit to Janitas, but it’s disappearance made for a great dinner at Ignatius. Sure Ignatius might serve some of the same old favorites, but they do them well. Also, I would say Ignatius is worth a visit if only for the boudin meatloaf and the alligator sausage.

J'anita's is now inside The Avenue Pub, 1732 St. Charles (at Polymnia). The food is even better and the pub's craft beer selection is world-class.

If you can handle the roaches, the food is OK. While eating lunch we had German roaches running across our table when I complained to our waiter, Chuck, he enlightened me that roaches are a part of our New Orleans culture like red beans and rice. We are such a dirty people that roaches are an big part of our local culture and having them crawl across your table is just part of the local entertainment so sit back and enjoy. Thank you Chuck for enlightening my wife and I. We had a wonderful lunch so wonderful in fact that it will be a long time before we will need that type of entertainment again. Clean the place up and get a professional pest service.

-That's a terrifying little story. I can't say I've ever experienced any sort of roach problem at Ignatius Eatery, but I haven't been back in over a year.

Thanks for the sanitation tip

-Why should I go back to Cleveland?