After a great cooking class by Louie Bruno, I was well acquainted with the kitchen at the Huntington’s Grille. Knowing that Louie would be in that kitchen, I decided to pay him a visit on Wednesday to see what changes he had made to the menu.

It was time to see what sort of impact Louie had imparted on the grill. The first appetizer ordered was the quail lettuce wrap. 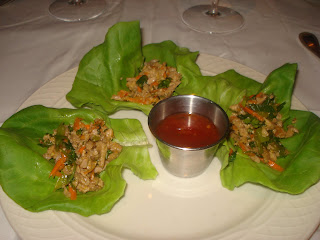 This was an auspicious beginning to the meal as these little wraps featured perfectly cooked and seasoned quail that was only furthered by the delicious sauce. I’m not sure if this dish is a Chef Tim Sim’s invention or a Louie Bruno creation. Regardless, it’s a far cry from what I used to eat at Huntington’s Grille.

Next was a pure Louie Bruno dish, spring rolls. 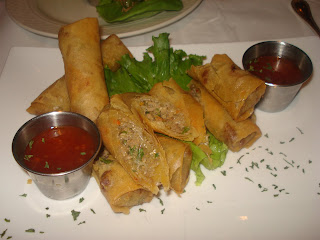 Aside from the lovely presentation, you have to notice that these spring rolls are made with turkey. I don’t normally associate turkey with Asian foods, but Louie made it work. Packed with a lot of cilantro flavor, these were excellent spring rolls that were also perfectly fried and complimented by a great dipping sauce.

For another appetizer, I decided that it wouldn’t hurt to try the sizzling garlic gulf coast shrimp. 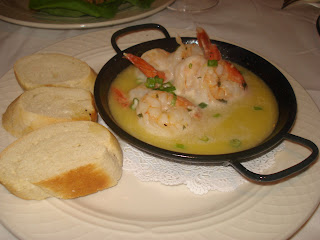 Like everything else so far, these shrimp were very well cooked. It didn’t hurt that the sauce was overflowing with the flavors of green onion and garlic; however the dish lacked a certain unami I associate with garlic shrimp. Still, the only real detraction from this dish was miniscule amount of Cuban bread. If you serve a dish in rosemary garlic butter, people are going to want to enjoy all the sauce, so the more bread, the better!

Continuing the never-ending cavalcade of appetizers was an order of the blackened scallops. 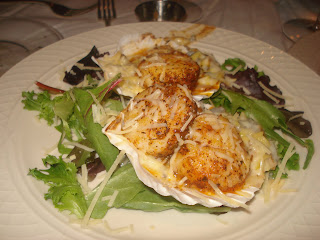 Again, this was well cooked seafood, and this dish featured a solid dusting of lingering blackening spice.

Last but not least was the crab cake appetizer 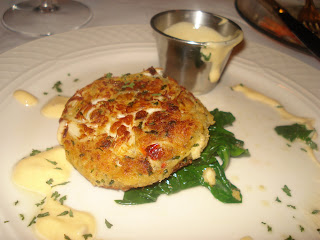 It’s nice to have Louie behind a range again as these crab cakes were full of nicely cooked crab meat and a good helping of spiciness. The cream sauce, I could take it or leave it, just give me more crab meat.

While the crab cakes were the last of the appetizers, there was a pleasant treat between courses. 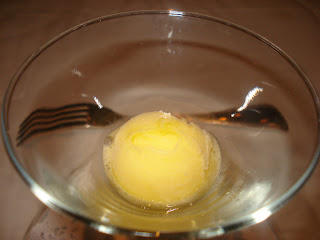 A sorbet between courses is becoming a real rarity, but this mango sorbet served two purposes. Not only was my palate cleansed, it was also a real tasty little dish.

Moving onto the main course, I had taken Louie’s advice and gone for the house specialty: oven roasted redfish. 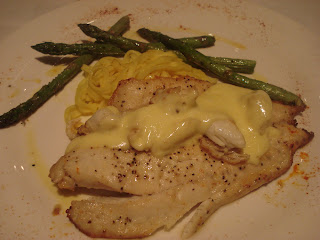 Served with jumbo lump crabmeat and a citron butter sauce, this seemed like the perfect end to the meal. Unfortunately, the problems started when I was served saffron linguine instead of my requested pepper jack cheese grits. 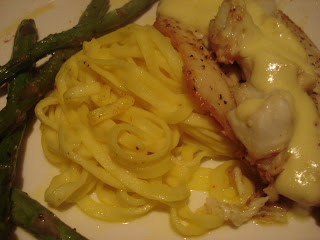 While waiting on my grits, I preserved and tried the linguine to find it to be al dente and very well seasoned. Maybe I should have gone with the linguine in the first place. 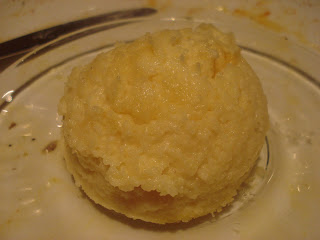 Just before I finished the waiter arrived with a odd ball of grits. Sure they had a very nice pepper jack cheese flavor, but like the redfish, they just seemed a little overdone.

It’s been a number of years since I last set foot in the Huntington’s Grille. It’s not that I was purposely avoiding it, I just never really think to go there. However, this last visit was a real delight, mainly by the great service and personal touch of Louie Bruno. If there’s one thing I learned from this dinner, it’s that I should have just stuck with the appetizers, but overall it was a nice dinner. 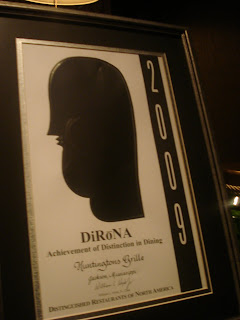 Apparently Chef Timothy Sims has done something right or the Huntington’s Grille wouldn’t have won only the second DiRona award in the State, still I can’t wait to see what Louie Bruno can bring to the table.