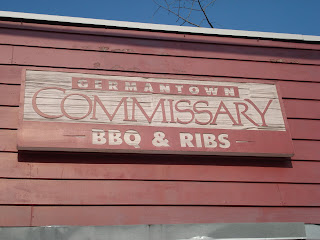 Any sane person would think that two bbq places in one afternoon would be sufficient, but I convinced Jennifer and Aaron that we should try at least one more stop. One of Jennifer’s oldest friend, Meredith, had lived in Memphis for 6 years and had given Jennifer a list of places to eat and things to do. Knowing that we would catch a fair amount of flack if we didn’t try one of Meredith’s recommendations, we made our way to Germantown for the Germantown Commissary.

Once we walked in, I was a fan of the Commissary. This really seemed to be a locals only place, mainly because it would be a stretch to hold more than 25 people.

Always on the lookout for cheap eats, Jennifer convinced us that we should try some of the hot tamales. At only $1.50 each, these had potential. 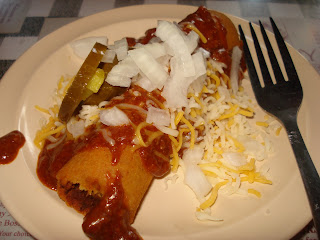 I think my near constant writing about Delta style tamales had Jennifer sick for a taste of home. Unfortunately, these were not Mississippi style tamales. Instead of corn meal, these were made with masa harina. Also, I rarely see tamales served with so many toppings. With chili, onions, cheese, and jalapenos, there was a lot of food for a buck 50. 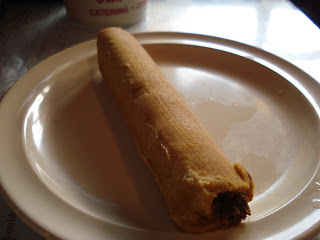 Also, there was plenty of meat. Sadly these tamales were gummy and really stuck to my teeth. The tamales had promise but they just weren’t any good. 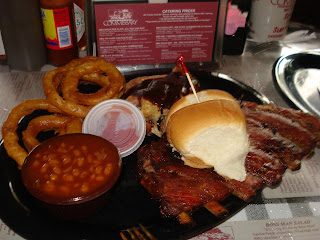 It looks pretty good so far, so I decided to start with the onion rings. 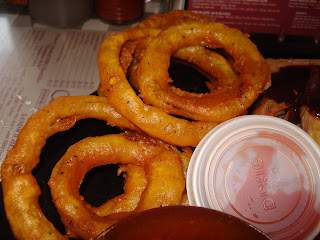 While these onion rings had a beautiful crust that was extremely dense and crunchy, it hid any onion flavor. 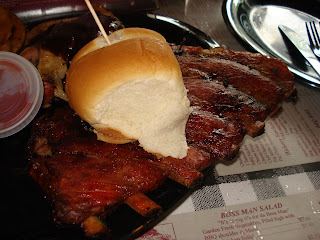 Skipping to the important part of the plate, I cut a few ribs for myself. With the membrane attached, I was disappointed to neither see nor taste any real smoke flavor or color. 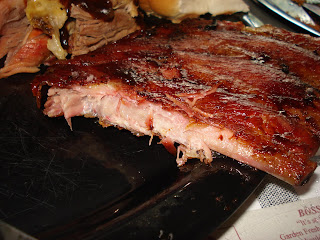 Even without the smoke flavor, these ribs had a nice amount of porky flavor that was able to stand by itself. 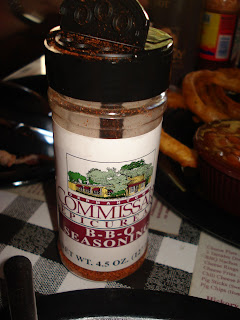 I tried the ribs with a little extra rub and it gave the ribs a nice boost. The rub wasn’t overpowering but again a compliment to the meat.

Moving on to the pulled pork, I was hoping we could finally find a good example of the Memphis style. 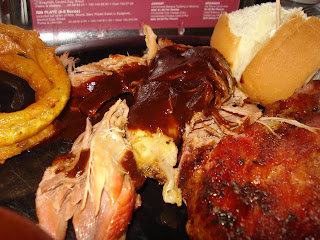 Looking to get a taste of the pork, I fished for a piece without any sauce and I was met with the ugly truth. This was just a dry mess and a complete waste of good pork. With no smoke flavor and no moistness this pork had the taste and texture of chalk.

Not wanting to leave anything out, I got a spoon full of the baked beans. 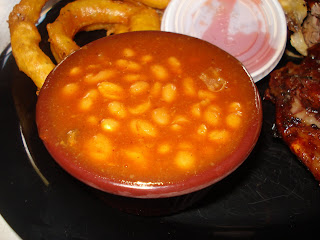 These were your standard fare baked beans. With plenty of sugar, at least these beans had a few flecks of pork.

I was hoping that Meredith would had pointed out a hidden treasure that served up mouthwatering bbq. While the Germantown Commissary had the look and all the kitsch, the bbq just couldn’t hold up. Maybe the chicken and sausage is excellent, but if you can’t do ribs and pulled pork in Memphis, then you’re just doing it wrong.

Thanks, you saved me a trip! Next time you're in Memphis, try the dry rub ribs at the Rendezvous.
;)
bk

germantown commissary is excellent everytime I go there. Excellent food and awesome bbq nachos, beans, and slaw. Must of been a bad day, that sucks.