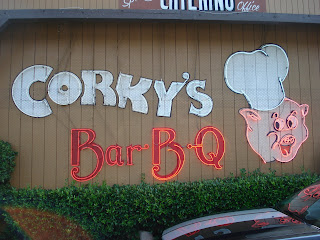 After our horrific experience at Neely’s, Jennifer, Aaron, and I were desperate for some decent bbq. With Rendezvous out of the question, I remembered The Paupered Chef’s Memphis weekend. In addition to Neely’s and Rendezvous, Nick Kindelsperger of the Paupered Chef visited the Cozy Corner and the original Corky’s on Poplar. Unfortunately Cozy Corner wasn’t open on Sunday so that left Corky’s.

With some quick directions from google maps, we arrived at Corky’s and were immediately greeted by a hostess and seated in seconds. Also a welcome change was our cheerful and attentive waiter. Oddly, I was surprised that the initial smell wasn’t that of bbq smoke, but onion rings.

While we were waiting on our order to arrive, Aaron and I decided to try the two house bbq sauces. 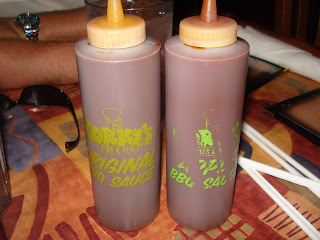 The original sauce was very sugary but with a prominent smokey flavor. Interestingly, the original was served warm and we all agreed that it was miles better then Neely’s. The apple bbq sauce was an odd duck. At first it tasted exactly like a rich apple butter but it then finished with the spice of bbq sauce.

In no time at all, our waiter came back with the first items from our order. 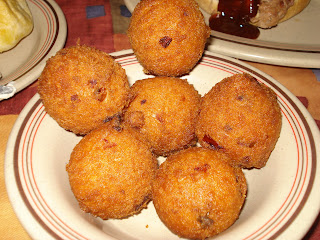 Jennifer decided to order the hush puppies. At first I mocked her decision, but after tasting the hush puppies, I was delighted to find them well fried and with a pleasant jalapeno kick.

Moving on to the bbq, the pulled pork sandwich was the first contender. 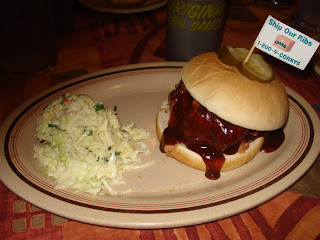 Right off the bat, this was better than Neely’s, mostly from the visible smoke ring on the meat. Another plus is that the sandwich was very moist. Unfortunately, the meat had no smoke taste. Every bite that had any smokey flavor was the direct result of the bbq sauce. A second downside was that we realized the moistness, like the smoke flavor, was the direct result of the sauce. By itself, the meat was dry and mealy.

Fast forwarding to the ribs, the slab at Corky’s is a welcome site. 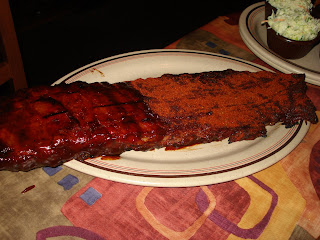 I’m glad that Corky’s was so accommodating by giving us a rack that was half dry rub and half wet. It’s looking pretty good so far. 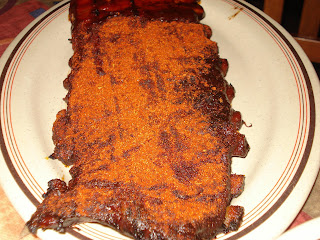 It’s nice to see that Corky’s doesn’t try and short you on the dry rub. Each bite of the dry ribs gave you a great taste of rub and a good smoke flavor, 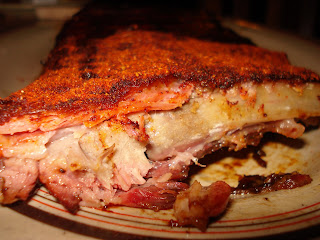 not to mention the essential smoke ring. 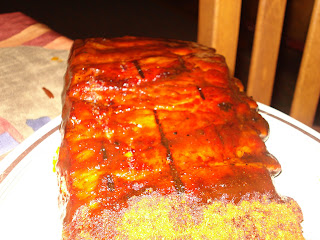 The wet ribs are a nice alternative with a delightful sweetness from the bbq sauce. Still, I prefer the dry rub ribs to the masking sweetness of the wet. Aaron pointed out an interesting tidbit about Corky’s ribs, they leave the membrane on. I’m not sure how that affected the flavor, but it is an odd touch.

Oddly enough, I forgot to take a picture of the baked beans at Corky’s, but it’s probably for the better. Their beans tasted just like canned beans, and I think it’s a faux pas to not have any pork in your baked beans.

I’ll freely admit, I only ate at the Jackson’s Corky’s once, and I was unimpressed. Thankfully, the original Corky’s is much better than any of their other locations. However, I believe that even though we enjoyed the ribs at Corky’s, we were just glad to get something besides Neely’s. Still, the pulled pork was subpar, so I suggest sticking to the ribs.