It’s time to chalk up another great find to Twitter. After seeing a list of 50 food related Twitter accounts, I started following the Homesick Texan. Naturally, I started to dig around her site, and I was immediately floored by her recipe for chicken fried steak.

Sure, there’s plenty of chicken fried steak in , but there really is something extra in the steaks from . Not planning a trip to any time soon, I decided the best course of action was the make the Homesick Texan’s recipe.

Who wants a plain chicken fried steak? Obviously, you’ll need some sort of starch to compliment the crunchy piece of beef. Using my mother’s vague recipe, I decided to make mashed potatoes. 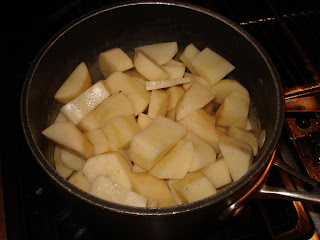 Here, there are 5-7 russet potatoes that have been peeled and cubed. After getting boiled in salted water, I pulled them off the range when they were easily pierced with a pairing knife. 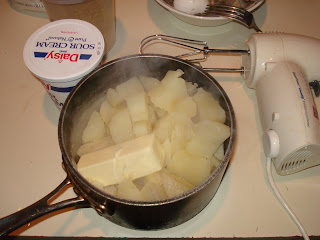 Now it’s time for my mother’s vagueness to come into play. I added a stick of butter ( minus a tablespoon or so) and then gave it the business with a hand mixer. 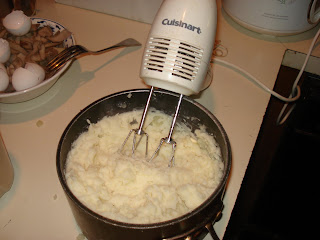 Once the mixture reached the right consistency, it was time to add the last ingredient. 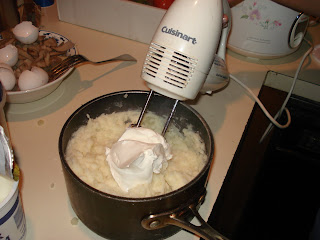 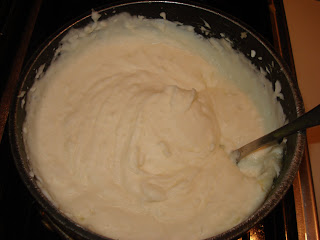 In the end, you have a large pot of deliciously smooth potatoes, just waiting for a spoonful of gravy. In addition to the potatoes, I set a full pot of rice to cook in my rice cooker, nothing like diversity in starch.

Moving onto the beef, with her recipe calling for 1 ½ pounds of top round steak, I was praying that my recent bulk order from Flying M Farm had included a couple pieces of that cut. 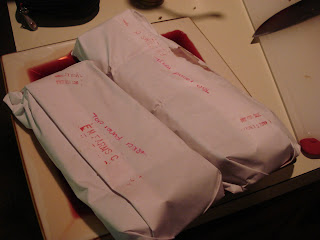 I was in luck. Unfortunately, a night of defrosting in the freezer left them swimming in a pool of juices. 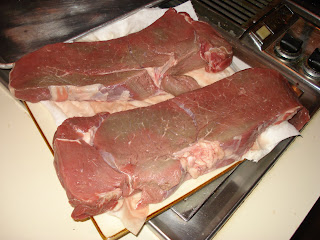 The recipe calls for the steaks to be cut into four pieces. Knowing that I wouldn’t get four even pieces, I started to carve the steak into the most even shapes possible. 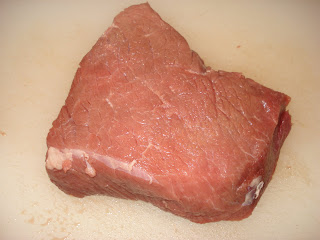 Not wanting to have a raw steak in the middle, I decided it would be best to cut the steaks in half. 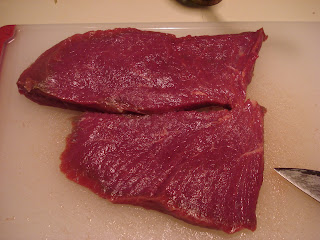 They may not be evenly proportioned but they’ll do the job.

Instead of going for the meat mallet to tenderize and flatten my steaks, I took a page from Alton Brown and broke out my Jaccard. 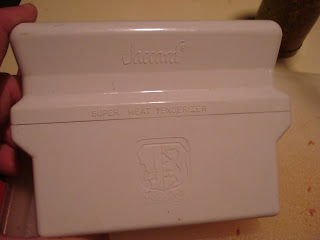 Sure, anything can say “super meat tenderizer” 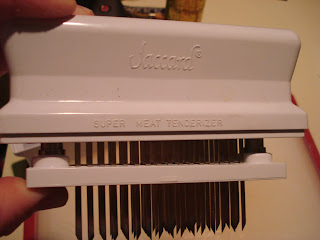 But with knives like these, it can back that claim up. The idea of the Jaccard is that it cuts through the tough connective tissue in the steak. 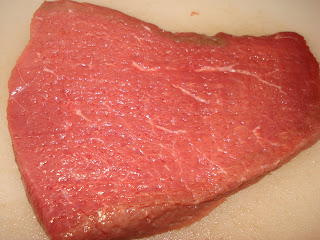 With the flash, you can see just how many times the steak is pierced after a few passes with the Jaccard.

After making sure all my steaks were thoroughly tenderized, I was ready for the next step. 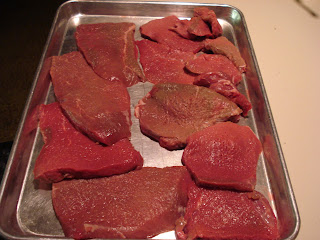 The key behind a good chicken fried steak is a quality crust. 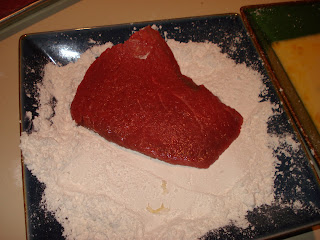 First each steak is given a good coat of flour. 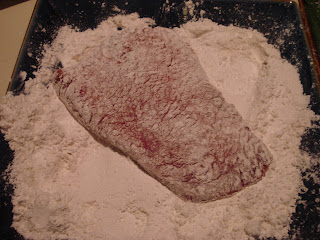 I made sure to flip and get each side covered. 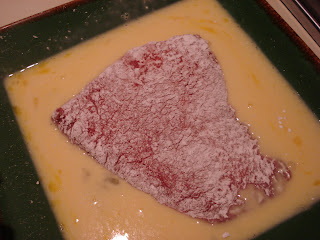 After shaking off the excess flour, the steak went straight into a mixture of 3 eggs and ½ cup of milk. 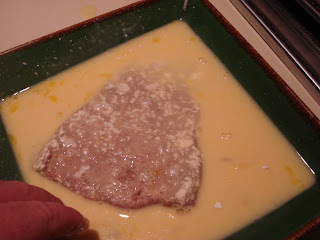 Again, make sure both sides are coated. 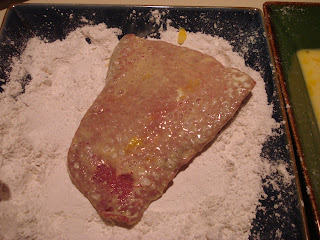 It was right back to the flour after the egg wash. 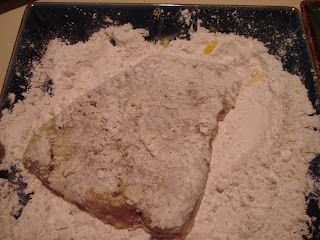 With my top round steak nicely coated, it was time for the skillet. I made sure the oil was half way up the skillet and nice & hot. 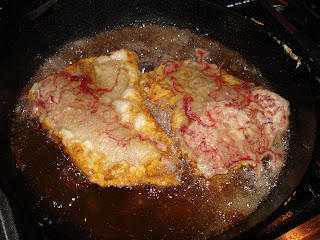 Three to four minutes later, you’ll see the blood pushing through the steaks meaning it’s time to flip these bad boys and cook for another five minutes. 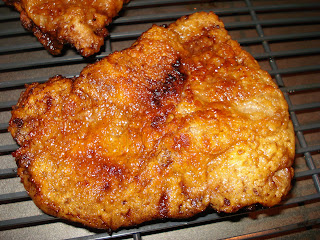 
When I had finished frying the rest of the steaks, it was time for the cream gravy. Not wanting to waste any of the pan drippings, I poured out all but 2 tablespoons of grease. 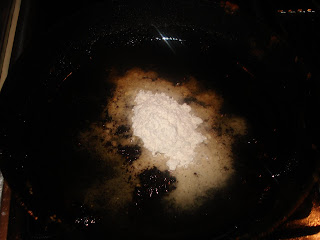 Added to the grease was 2 tablespoons of ap flour. 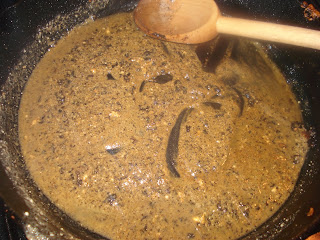 The idea is to make a good brown roux. If you’re not sure how to make a roux, I’ll give you three important tips. Be patient, keep stirring, and don’t burn the roux. 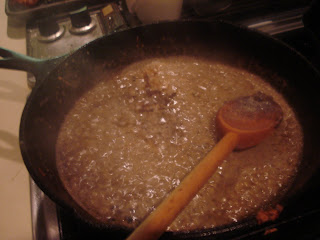 Now for the cream part of the gravy, I slowly added 1 ½ cups of milk to the pan. Again, it’s important to be vigilant with the stirring and make sure to smooth out any lumps. 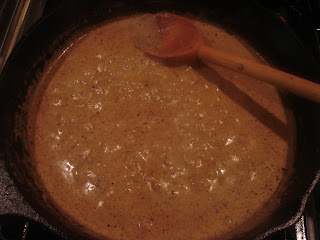 Turning it to low, I kept stirring until the gravy was good and thick. After seasoning to taste with salt and pepper, it was good to go. The Homesick Texan actually says to use 1 teaspoon of pepper, but probably used closer to a tablespoon.

After all that work, it was time to enjoy the fruits of my labor. 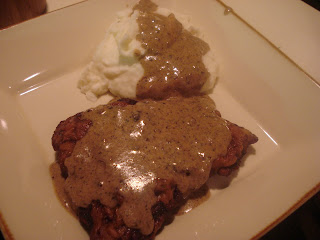 It’s not the most exciting presentation, but I’ve never been a fan of a tarted up chicken fried steak. 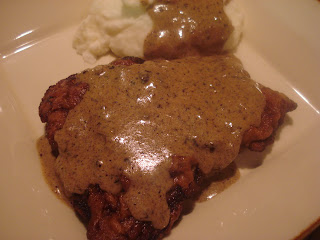 Sure, it’s by no means healthy, but this is a truly delicious meal. Thanks to the Homesick Texan, I now have a go to recipe for stellar chicken fried steak.