On the toolbar of my browser, I have an ever growing folder called “food blogs”. One site I occasionally read is Chez Pim. Soon after Jazz Fest, Pim posted a recipe for some delicious and simple pralines.

Having had a measure of success with her Thai marinated fried chicken, I decided to give the recipe a try.

Like all good pralines, this recipe starts with pecans. 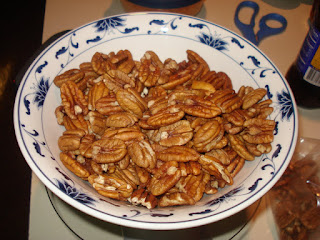 Since Pim’s recipes are given in metric weights, I figured it was time to break out the kitchen scale. It seemed pretty pedantic to measure out exactly 350 grams of pecans, but the next step was much more fun. 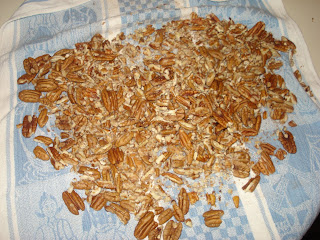 With the recipe calling for broken pecans, I thought the best thing was to wrap the pecans in a kitchen towel and then give them a few good whacks with a mallet. 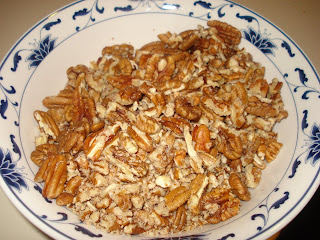 It may not have been the most effective method, but it was loads of fun.

After putting my trusty le creuset pot on medium heat, I started with the butter. 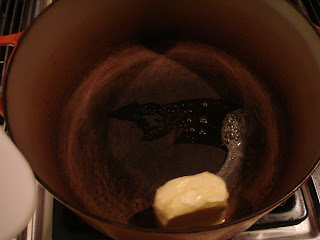 7 tablespoons or 100 grams should be just about right. I was using plugra for this recipe.

While the butter was melting, I added in the next ingredient. 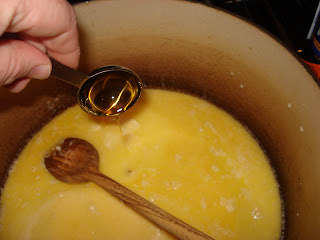 One healthy tablespoon of corn syrup was dumped into the pot.

Now it was time for the sugar. 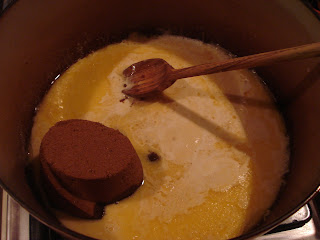 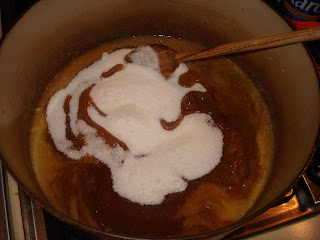 Immediately after, I added an equal amount of white sugar. With three whole cups of sugar, I knew this was shaping up to be a truly healthy dish; excellent!

Last but not least, a 12 oz can of evaporated milk was poured in. 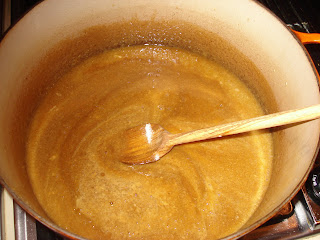 With nearly all the ingredients in, the whole thing was brought to a boil. 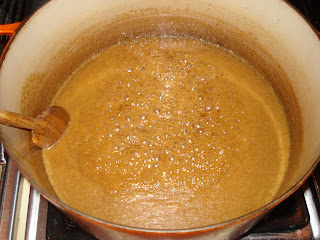 Once a healthy boil was achieved, I kicked the heat down to low for a good simmer. 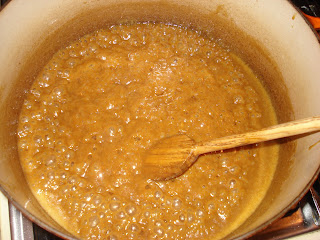 As soon as my thermometer reached the magic number, I added 1 teaspoon of vanilla extract and the pecans. 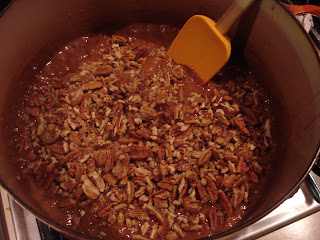 The next step calls for beating the pecans with a spatula for 3 minutes, until they reach a light brown color. 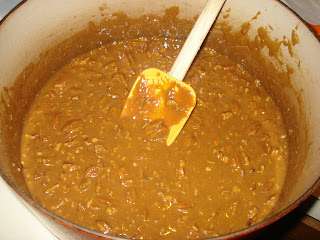 Pim explains this step is to ensure that air is incorporated into the pralines. As a personal touch, Pim adds a pinch of coarse salt at this stage. I decided to follow suit and add a healthy pinch of sea salt.

The last and trickiest step is spooning the mixture onto the waiting wax paper. I might have failed to mention that you need to have wax paper nearby. Pim writes that buttering the paper is optional as it helps to prevent your pralines from sticking. I figured if Pim wrote that she didn’t use that step, nor should I.

Anyway, I took a healthy spoonful of praline mix and then used another spoon to scrape it off. 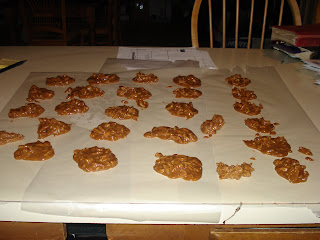 At first I tried to mold the pralines into a ball or torpedo shape, and the ones on the right show this was not a prudent method. The pralines on the left side show the correct method: take a heaping spoonful, try not to drip or burn yourself and then scrape it off into a little pile. 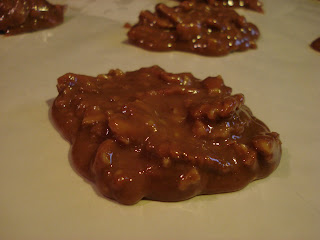 With a little hard, sticky work, you eventually end up with some delicious looking pralines.

The last step was waiting for the pralines to cure. Pim writes that this could take an hour to a few hours depending on humidity. Being that I live in on a lake and it was the summer, humidity was a huge factor. 8 hours later, some pralines still had not set, and it wasn’t until the following morning that they finally did.

Issues with setting aside, these were delicious pralines. The only real downside was that some were saltier than others. As I was sharing the pralines at work, I thought this recipe could be a great springboard for praline variations like bacon or bourbon pralines and other seemingly endless combinations.

The allure of bourbon or bacon pralines was just too much, so I decided to try the bourbon pralines first. 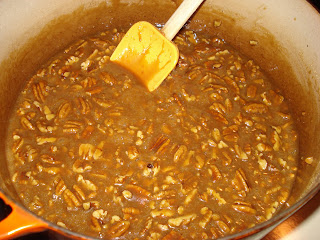 I used the exact same recipe as before, except this time I used a good shot of my favorite bourbon, Blanton’s. 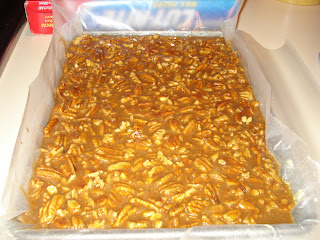 Remembering how much I loved the chunks of pralines from the Cochon Butcher in New Orleans, I tried to pour the whole batch into one sheet pan. I was hoping a night on the counter would harden things up. No such luck, not even a night in the freezer would make this sheet pan solid.

I decided to start again and use only a teaspoon of bourbon instead of the tablespoon or two I had added the first time. Same results, nothing ever hardened. I’m still not sure why. My best guess is that Blanton’s has too high a proof to work. The vanilla extract I used is only 60 proof, but the Blanton’s is closer to 95. Regardless, the syrupy results were still enjoyed by all, especially over ice cream.

After a few weeks of Paul Anthony’s not having the right bacon, the Nueske’s bacon arrived! I quickly set to work cooking and cutting the bacon. I wanted to make sure that there wouldn’t be any gummy, fatty parts in the pralines.

The idea is to replace the 3.5 cups of pecans with bacon, in this case it was 2 12oz packages of Nueske’s bacon cooked to just the right crispiness. 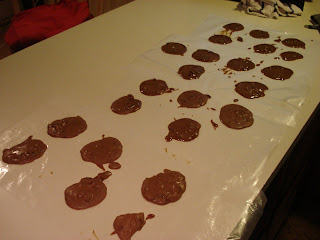 At first I thought it would never set, but as I spooned them out, they began to immediately harden. 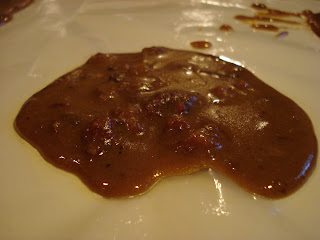 One might think there are still pecans in the pralines. 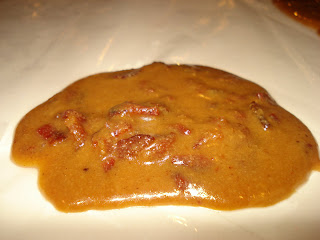 Nope, those are just pieces of bacon.

In the end, the bacon pralines were just as successful as the original recipe, if not more so. People couldn’t get enough of the sinful combination of real apple wood smoked bacon and pralines.