I know that my timing couldn’t be more clichéd, especially with the arrival of Julia & Julie in theaters, but I just recently picked up my own copy of both volumes of Mastering the Art of French Cooking. It really is an overwhelming collection of recipes, and thumbing through it gives you an idea of just how much work both women put into it.

I wanted to start with something simple, and preferably something that could use some of the beef I just picked up from Charlie Munford at Flying M Farm. There aren’t many recipes for ground beef, but the first one really caught my eye. Bifteck Haché À La Lyonnaise, a very French version of a hamburger.

Looking over the recipe, the first thing that I noticed is the beef is mixed with a fat before cooking. Having the choice of softened butter, ground beef suet, beef marrow or pork fat, I chose the ever convenient butter. However, regular butter just seemed a little blasé, so I started with a recipe on page 101 for garlic butter. 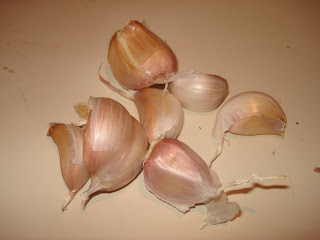 Starting with a fresh bulb, I pulled out 7 or so good looking cloves, but I didn’t peel them. 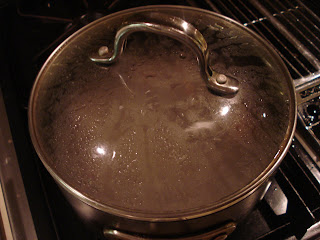 Instead they went straight into a pot of boiling water for 5 seconds. 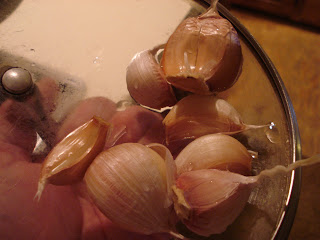 They didn’t look that different after fishing them out. 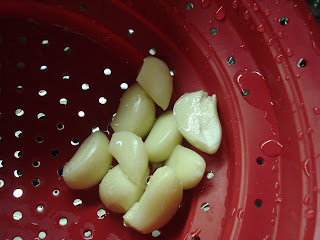 Per the recipe, I drained, peeled and then rinsed the cloves under cold water. Then back into the boiling water for 30 seconds. 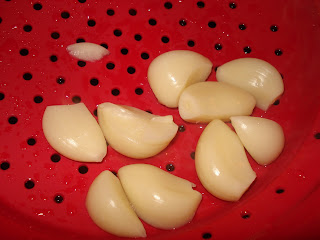 And they came out looking much the same. 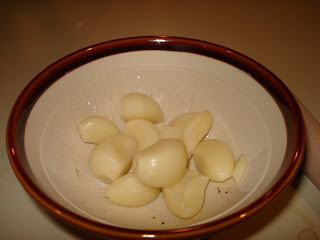 Now with my trusty mortar and pestle, I started to crush the garlic. 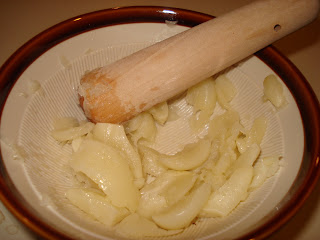 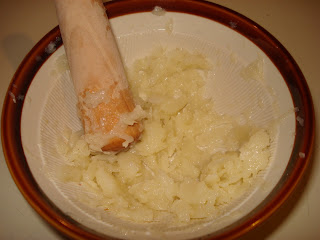 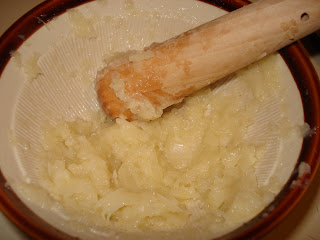 Looks decently smooth to me. 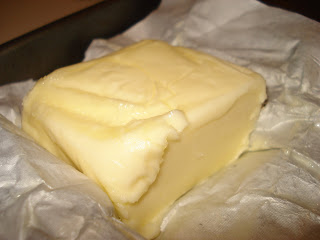 Now for the star of the show, ½ cup of beurre d’isigny 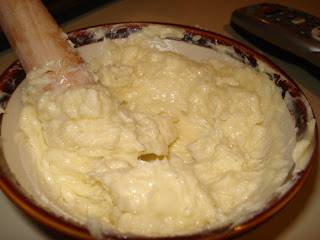 With the butter in, the next step is to cream the butter and garlic. You have to admit, this looks great. 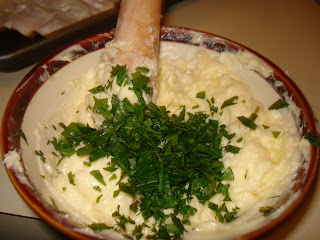 I decided to add the optional 1-2 tablespoons of minced parsley. 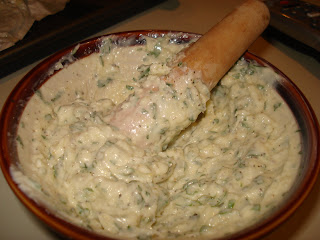 After mixing and added salt and pepper to taste, I had a finished product.

With my garlic butter ready, it was time to move on to the beef. The recipe calls for ¾ cup of finely minced yellow onions, but instead of adding them to the beef right away, I need to sweat the onions with butter. 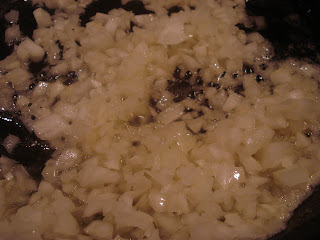 After 10 minutes or so, I had some very tender onions. 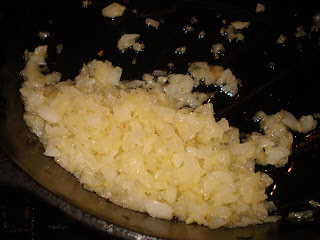 Once the onions were finished, I moved them to a mixing bowl. 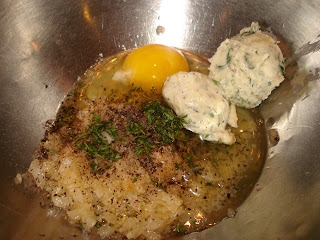 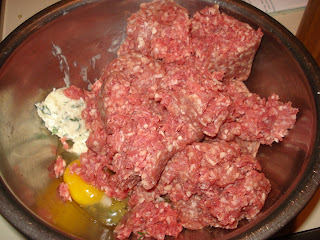 Last but not least was 1 ½ pounds of free range, organic ground beef from county. 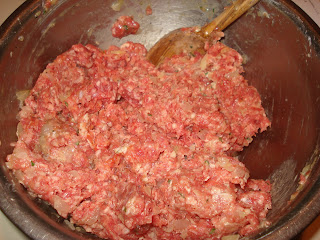 Everything was then thoroughly blended and formed into patties. 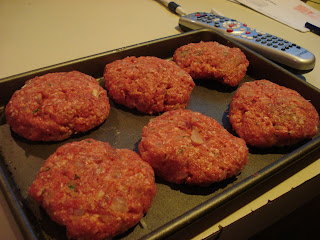 The recipe says this makes 6 hamburgers, and those are some sizeable hamburgers. 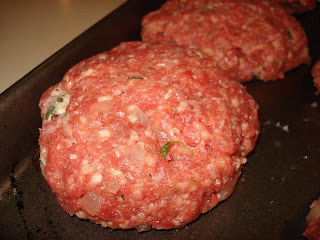 I do love seeing the flecks of herbs and butter.

I immediately moved on to the cooking stage of the recipe and got my skillet ready with 1 tb of butter and 1 tb of olive oil. 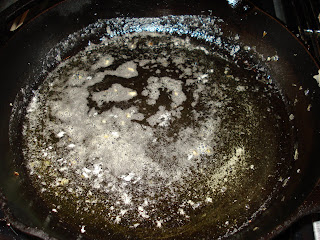 Melted butter and oil is an exciting thing, isn’t it? Anyway, before introducing the patties to a cast iron skillet over medium high heat, I gave them a good roll in a ½ cup of flour. 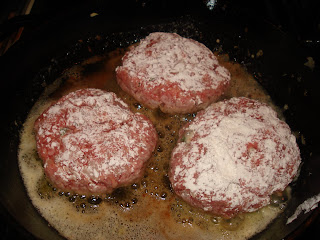 Looking for a good sear, I was delighted to hear the sound of sizzling when the burgers hit the pan. 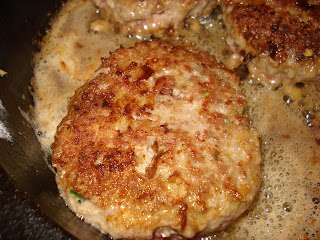 After 3 or so minutes on one side, the burgers had a wonderful crust to them.

With another 3-4 minutes of cooking, I was ready to make a sauce for the burgers. 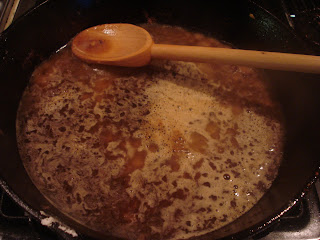 I thought I was prepared but I couldn’t find my beef stock anyway in the freezer, so I resorted to a box of beef stock. The idea is to boil the stock and scrape up all the fond on the bottom on the fan. Boiling to a syrupy consistency, it was time for more butter. 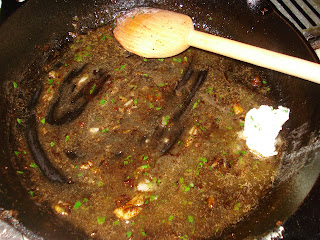 Taking the pan off the heat, I added 3 tablespoons of my garlic butter in ½ tablespoon increments. 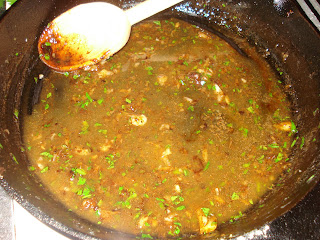 Within a minute, I had a rich sauce that was just dying to be poured over the hamburgers. 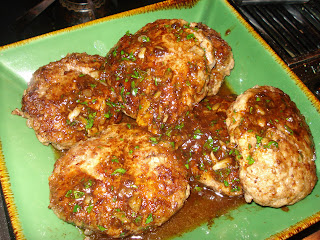 There is little to nothing healthy about the dish, but it looked phenomenal.

I picked one off the platter and decided to see if my labor had been a waste. 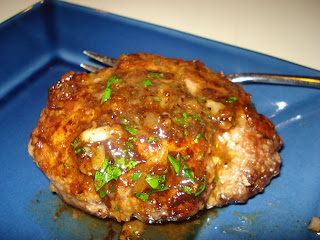 I might have undercooked the burger a little, but everything else about the dish was nearly perfect. The sauce was rich and decadent and the burgers were just as unctuous and bursting with flavor. All in all it seems to be a pretty precocious start for my first attempt at a Julia Child recipe.

I recently came across your blog and have been reading along. I thought I would leave my first comment. I don't know what to say except that I have enjoyed reading. Nice blog. I will keep visiting this blog very often.