We had reservations at the café for that Sunday night, but our day at the Fancy Foods show had been both exhilarating and draining. Having come down with a case of the chills, Paul couldn’t make it to dinner. So it was up to Joseph, Little Paul and I to brave the night and use Paul’s reservation.

Once inside, I took a real liking to Union Square Café. It seemed to have all the necessary touches to make it your classic American café. I was a little curious about how busy it was. Even though it was 9 on a Sunday night, I expected a larger crowd for . Also, every table was full, but it was easy to have a conversation without straining your voice. It was all a little odd, but actually quite nice.

After taking studying our menus, we were soon ready to put in our order. I love a restaurant that serves appetizer portions of their main plates, and did this with each of their pastas. 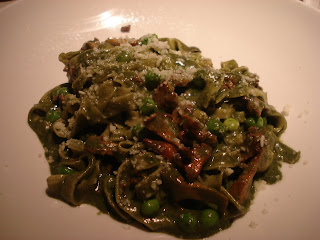 So, I ordered a small portion of the house made fettuccini with wild nettles, prosciutto, and chanterelle mushrooms. The fettuccini had that perfect tender bite of a fresh pasta, unfortunately the sauce was a little watery and seemed to wash away some of the flavors. I was also surprised to see everything be so green. I suppose I had expected there to be nettles in the dish, not have the sauce be made from them. Also, where was the prosciutto? I did my best but I couldn’t find the tiniest shred or the hint of their flavor. On the plus side the mushrooms were deliciously tender.

Moving on to the entrée, I decided to try an indulgent favorite, the crispy duck confit. 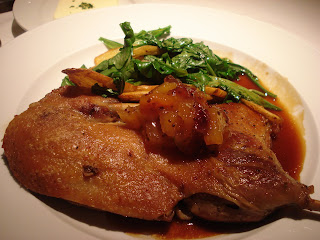 Served with fingerling potatoes, glazed cippolini, bitter greens and mostarda, I was already a fan of the presentation. Taking a sample of every little piece, I found that the potatoes were wonderfully crispy and the greens were nicely wilted but had not turned to veggie mush. Unfortunately both the potatoes and greens lacked any real pronounced flavor. However the biggest surprise of the meal was the duck itself. Sure it was fork tender, but the first bite revealed a dried out piece of meat. I know not sure how something cooked in it’s own fat can turn out dry, but the kitchen at Union Square Café pulled that trick off flawlessly. In an odd twist, the best cooked part of the entire meal was the cippolini onions. They were fork tender, extremely flavorful on their own, but they took on a new life when combined with the plate sauce.

After our plates were cleared, I asked Paul and Joseph what they thought. We all seemed to agree that Union Square Café was pleasantly mediocre. Maybe I tried the wrong dish, or maybe the people who rank this as one of NYC’s best are off their rocker, but I was let down by Union Square Café. Unfortunately, my trips to are too few and far between to pay another visit to this café.

www.NYCBeerathon.com The NYC Beerathon is the premier event for CHAMPIONS that this city has to offer. The Beerathon is for athletes of the liver. It’s for the brave, the strong, the weak, and the meek. Everyone and anyone. As long as you love beer, you have the opportunity to take part in this awesome festival of fun. Finishing is not mandatory, participating is. Your entry fee will gain you access to 26 beers at 26 different bars set along our amazing course. It will also gain you access to a carefree, fun group of thousands of like-minded individuals looking to have a good time and make some new friends. The NYC Beerathon is the greatest day of your life. SIGN UP NOW!