I’ve written about tamales at a few places around the state, but I figured it was time to write about my hometown favorite: Tony’s Tamales. 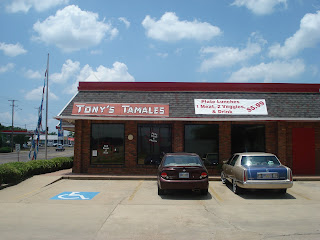 With his change in venue, came a change in menu; what was once a choice between hot and mild tamales now runs the gamut from hot tamales to polish sausages to chicken and dumplings.

Once inside the restaurant, you can’t help but notice the blues memorabilia and antique farming knick-knacks. I think it’s a subtle reminder that you’re about to eat a delta favorite.

After a short wait, my order arrives. 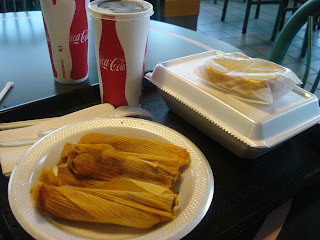 Tamales are a simple, portable food and as a result everything about Tony’s is the same way. Even when you’re dining in, the food comes in a to-go box, but I’m here for the tamales not for the styrofoam. 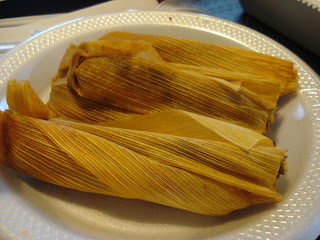 A nice thing about Tony’s is that they use the corn shucks, so while the tamales are still greasy, they’re not as greasy as parchment tamales. 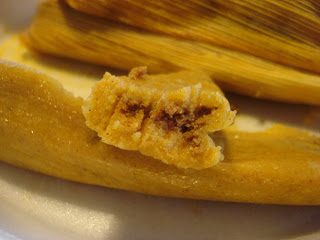 Taking that first bite, you enjoy the consistent ingredients of a delta tamale. With the constant smell of flavor and cumin, it takes a second to notice the cayenne, but there’s a nice consistent level of heat. One thing you might notice is that Tony’s uses ground turkey meat; definitely a departure from the all beef tamales in Greenwood. 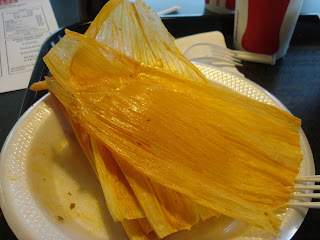 I’ll admit, I’ve only enjoyed the hot tamales, but Tony’s also offers mild tamales and black bean tamales as a vegetarian option. With each tamale coming in at roughly a dollar apiece, you’ll quickly find yourself satisfied for a reasonable price.

Having enjoyed a ½ dozen tamales, I was reluctant to open my to-go box of chicken and dumplings, but I knew I had to have a taste while they were fresh. 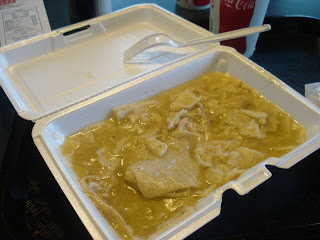 Chicken and dumplings are something near and dear to my heart. I have many fond memories of my making dumplings with my grandmother and making a general mess of things. Now, it’s become a common occurrence for me to try someone’s chicken and dumplings and turn my head in disgust. That is not the case with the dumplings from Tony’s Tamales. 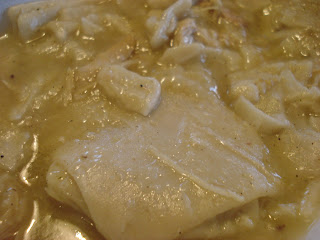 This are real dumplings, not some dreck that’s been cut out from biscuit dough. 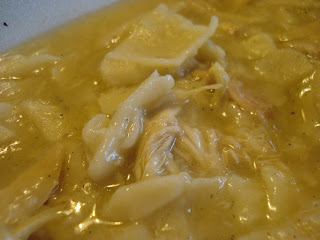 You can see the tiny globules of chicken fat that are everywhere in this container of dumplings. This dish has real chicken flavor, and when done correctly, is absolutely delicious.

Not content with filling your arteries from chicken fat, Tony’s packages the dumplings with this small piece of garlic bread. 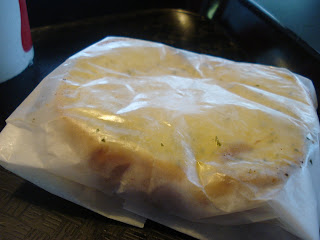 You can tell that has potential when it’s made a grease stain through the parchment paper. 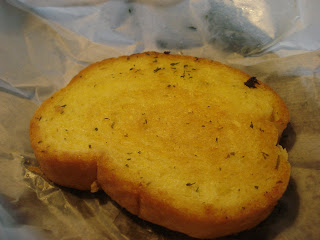 This piece of garlic bread is delicious in its own right. 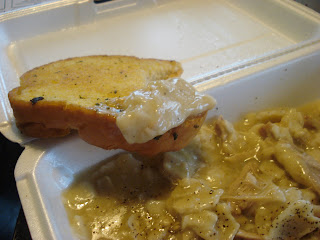 However, if you combine it with the chicken and dumplings, it really is just too much to handle, in a good way.

To the uninformed, Tony’s Tamales may look like just another greasy spoon, and in some ways they would be right. Tony’s is not the place you go to for health food, but if you’re in the market for fine tamales, chicken and dumplings, and other favorites, there are few that can compare.