Taste of the Island - Jackson 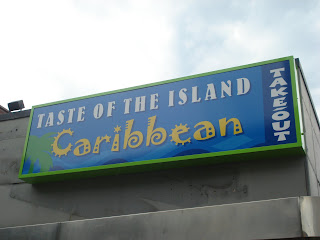 It’s not often that new restaurants open in downtown Jackson, so I was seriously intrigued when I saw a different restaurant’s Styrofoam containers at the office. After a few quick questions, I was delighted to find out there was a new Caribbean style restaurant on Capitol Street. The next day, I called my buddy Sam to join me for an exploratory lunch. Sure, we were deviating from our bacon cheeseburger quest, but how can you turn down jerk chicken?

After finding parking and claiming one of the four tables, we took a good look at the menu. With less than 10 entrée choices, it’s not an overwhelming menu. However, after some recommendations and being told that they didn’t have jerk ribs on Tuesday, we decided to try three different items.

First up was the curry shrimp. 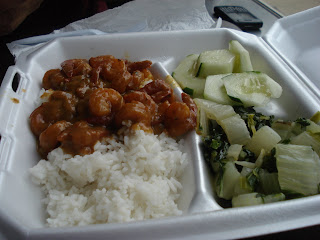 What a precious start to a meal. Although the shrimp were on the small side, each bite was full of delightful curry flavor. The shrimp did have a nice level of heat, nothing too excessive. 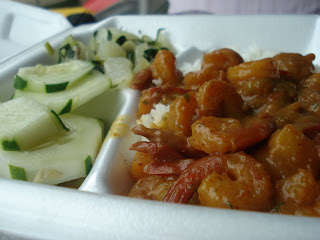 Sam and I soon made short work of the delicious, little shrimp. However, we can’t forget the bok choy. 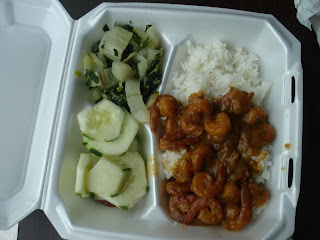 Richard Higgins, the co-owner, wanted to make sure we knew what bok choy was before. With a childhood of Chinese cuisine under my belt, I had a good concept of the vegetable. Unfortunately, this bok choy was boiled down and had little flavor. I prefer the Asian style with its high heat and full flavors, but this was the sole low point of Taste of the Island.

Starting second in our Tuesday lineup was the jerk chicken. 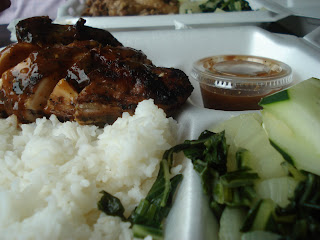 I had great expectations for the jerk chicken and at first I was little disappointed in a slightly dry chicken breast, but the thick and delicious sauce more than made up for it. 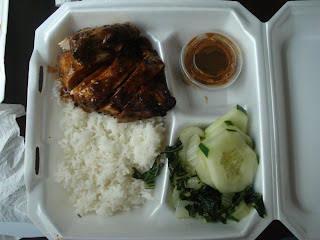 Seriously, the jerk sauce is a potent mixture. At first you think there’s nothing too spicy about it, but if you dip the chicken to the bottom of the container, you’ll get a full dose of heat.

It took the suggestions of Chandra Higgins (wife of Richard and the other co-owner) and my urging before Sam would give the last Tuesday entrée a fair shake. 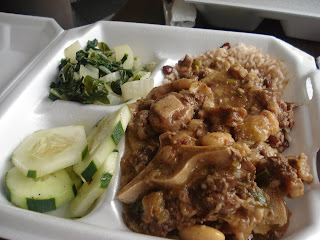 Oxtails are an underrated dish, but the Higgins worked magic with this simple cut of meat. Each bite of the meat was rich, tender, and had been cooked a smooth and buttery consistency. 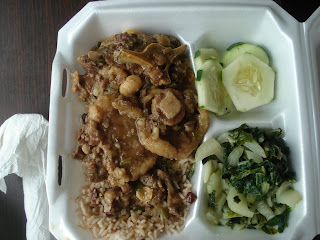 Normally, this would be the end, but Sam and I were so enticed by the thought of jerk ribs, we came back for lunch on Friday. Unfortunately, we got there too late, and all the ribs and all the meat pies were gone. Hoping to drown our sorrows, we decided to order pretty much everything else on the menu.

Our first choice for that Friday was a Wednesday and Friday special, curry goat. 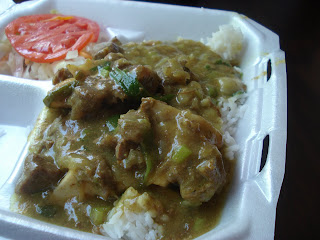 I realize that some people might be turned off by the idea of eating goat, but you’ve got to give this dish a chance. Sure the meat was little chewy, but it was bursting with a rich, meaty flavor. Complimenting the goat was the great curry sauce, again nothing too hot, just very good. I love how most of the meats are served on the bone at Taste of the Island. Not only does it give each dish a little more flavor, it’s a nice rustic approach to food.

After the curry goat was….another curry, this time curry chicken. 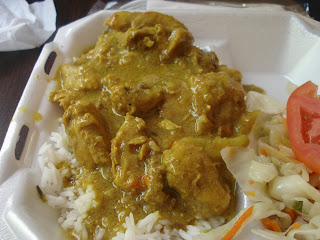 I like that all three of the curry dishes have different color sauces. It’s comforting to know that the Higgins aren’t just slapping one curry sauce on all the different meats. Anyway, this curry chicken was served on the bone and was a little more cumbersome to eat the goat. However the lighter texture and taste of chicken gave more room for the curry heat and flavor to grow, a definite plus for the chicken.

While waiting on our third entrée, Sam and I began talking to Chandra about what else they had to offer. Since we had missed the meat pies, Chandra was more than generous and started to bake another batch of pies. After looking over the menu, Sam and I realized the only entrée we hadn’t ordered was the brown stew chicken. Again Chandra was to the rescue. 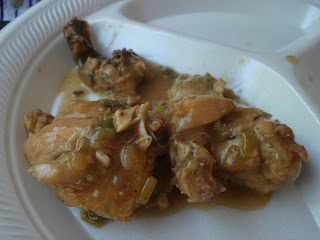 Richard described how he cooked the chicken and I immediately recognized it was a fricassee. Needless to say, it was an extremely rich born sauce that was only let down by breast meat. Too much sitting in a steamer tray had turned this chicken dry and stringy. I’m willing to bet this would be better with dark meat, and if it had been made fresh for that day.

Until this point, every entrée had been under $8, but now it’s time for the final and most expensive dish, the red snapper. At $12, it may seem pricy by comparison, but look at what you get. 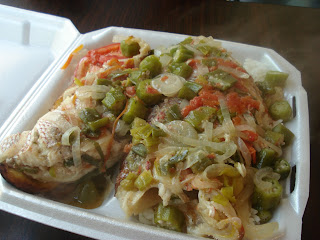 I told Chandra to surprise us and as a result our snapper was steamed, and what a presentation. I can only imagine the scene this would cause if you tried to eat it at your desk. Digging in, I was delighted to find the meat lightly flavored and well cooked, if maybe a little dry in parts. Still there was loads of okra, onion, green peppers, and tomatoes, all lending a hand to flavor the fish. Even though it was a little tedious to eat due to so many small bones, it was well worth the effort.

Maybe it was lethargy, or maybe Sam and I were enjoying our lunch too much, but we had been there long enough for the meat pies to cook. 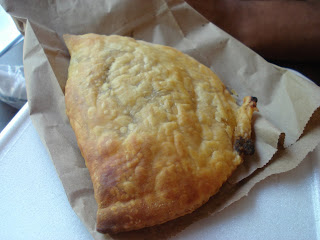 Fresh out of the oven, Chandra serves each meat pie in a paper bag, and at only $2.95 there’s a lot of pie to be had. Doing my best to cut in half, Sam and I each took a piece. 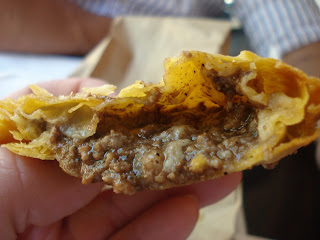 It’s like a small pool of beefy lava. I should have known better but I went straight for the kill and burned my mouth in the process. Still, Sam and I were delighted by the flavors of the beef patty. I tasted hints of cloves, cinnamon, and nutmeg and they were fantastic. So, the fresh patties were hugely hot, messy to eat, but delicious and well worth the wait.

Having tried practically everything on the menu, I can say with full confidence that Taste of the Island is an excellent establishment. Not only are Richard and Chandra Higgins gracious hosts, they serve a fine slice of the Caribbean that has been sorely missing from the Jackson area. I only hope that the word spreads and the Higgins experience the success they deserve, I know I’ll be back soon.

I thought the curry chicken was fantastic. Tender and flavorful, it got me sweating a little (in a good way). A welcome addition to the Jackson ethnic dining scene.

After reading that I may starve to death before making it somewhere for lunch.

AD, are there any vegetarian options?