Spice Avenue has been on my list of places to try for some time, and Tuesday, I decided it was time to cross it off. Situated on the I-55 north frontage road and sandwiched between a package liquor store and a cosmetology school, is very easy to miss. Once you pull into the parking lot, the mirrored windows do seem a little odd, but soldier on, there’s Indian food to be enjoyed.

Once inside, is a very pleasant place to be. Apparently they have abandoned the idea of being a grocery as the floor is devoted to tables. Having a seat in a booth, my waiter soon brought a plate to my table. 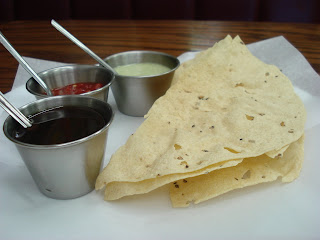 Taking a bite, I guess this is an extremely crispy version of naan, and it was served with three sauces. The one in the back was a very tasty yogurt sauce, next was a hot sauce that was heavy on the vinegar. I thought it tasted and looked remarkably similar the chili garlic sauce from Huy Fong (makers of the infamous sriracha). Lastly was a very thick sauce that reminded me of tamarind.

When it came time to order, I knew that I had to try one of my favorite curries, the chicken tikka masala, but I was at a loss for anything else. Asking the waiter for some suggestions, I eventually ordered a couple of appetizers. 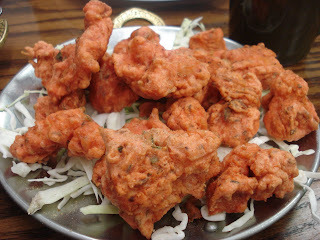 First was the chicken pakora, which was chicken slices stuffed with mint and deep fried. I love that odd but pleasant pink color that you really only see in Indian cuisine. Taking a bite from a piece, I was delighted to find the chicken to be moist and overflowing, but not overpowered with mint. The waiter had said this was a spicy dish, and while there was a little heat, it was nothing overwhelming.

Going for a full chicken trio, I also ordered the drums of heaven appetizer. 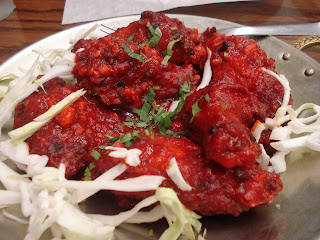 I wasn’t sure what to expect when I read that the chicken wings were marinated and tossed in an Indo-Chinese Manchurian sauce, but I loved the contrast on the plate. 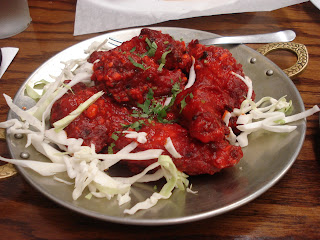 The shreds of white cabbage couldn’t have been more stark against the deep, ruby reds of the chicken. As important as presentation is, the taste is the key. Like the pakora, this chicken was juicy and well cooked, and as much as I enjoyed the slightly spicy sauce, I was amazed at how messy it was. Still, with the spice lingered on my lips, I was extremely satisfied and unprepared for the entrée.

When my waiter asked me how spicy I would like my food, I told him to go the whole 9 yards, so when I was saw the chicken tikka masala; I was ready for some heat. 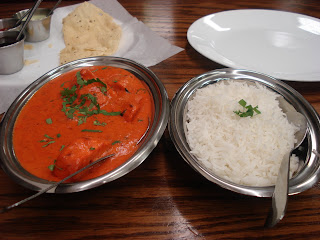 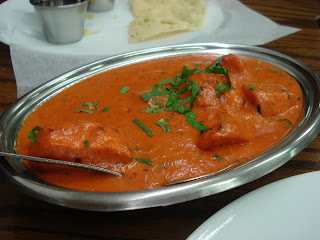 Ladling a spoonful of the chicken onto my plate, I was ready for the onslaught of spice. Unfortunately, it was very underwhelming in the spice department. Sure there was little heat, but it was more of a background element of the dish. What did stand out was the sheer richness of the tomato and cream sauce. 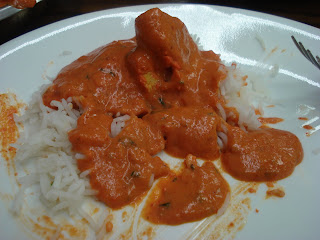 Hoping to tame the rich sauce, I tried a tikka masala over rice and was pleased with the result. This curry really is an exceptional dish, but it’s too much to eat at one time, the sauce is just too rich, no matter how you try it.

I usually enjoy a little naan with my curries, so I had put in an order for the garlic naan as well. When I read that it was leaved bread topped with chopped garlic and cilantro, I expected an overabundance of delicious garlic and sharp cilantro. 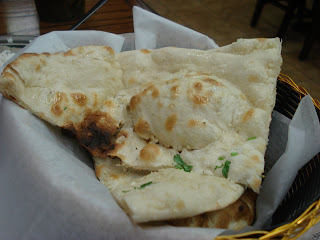 Instead, I received a piece of naan with a few shiny spots of oil and a tiny shred or two of cilantro. 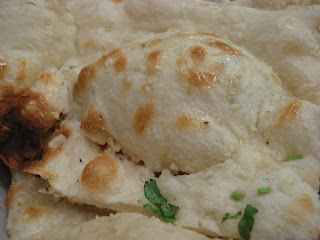 Close up you might be able to see a few specks of garlic here and there, but don’t look too hard, you might hurt your eyes. Hoping the taste would be more substantial than the visual, I was disappointed to find that while it was very well cooked naan, it was severely lacking in the garlic department. However, the naan was excellent for dipping a little of the chicken tikka masala, so it wasn’t all bad.

It happens to everyone; sometimes you can’t believe you waited so long to try something. You want to kick yourself for being so thick, and this was one of those times. Sure there were a few slipups at , such as the overpoweringly rich chicken tikka masala, and the rumors of poor service were completely unfounded. I’ll admit there was a decent lull between my appetizers and my entrée, but I was more than content to watch the highly entertaining Indian music videos. Needless to say, I enjoyed my meal at , and I’m eager to give it another try.

The appetizer is pappadams (pappadums, papadam, papadom, etc.), which are essentially lentil crackers. Green is a mint yogurt sauce that has - I think, correct me if wrong - a touch of cilantro; red is just a chili sauce; and brown is in fact a tamarind sauce. Their pappadam are considerably better than those served elsewhere.

And for balance, you should try the lunch special - it's not as much meat, but has more veggies. The chili sauce in particular does extremely well with their lentil dish.