It took a whirlwind taxi ride from Times Square to 3rd Avenue and 46th, but I made it before it was too late. Normally I wouldn’t worry about being 10 or 15 minutes late, but the fellas I was meeting had been in and out of airports for the past 10 hours, and I wagered they would be quite hungry.

Thankfully Paul Koury, the Paul behind Paul Anthony’s Butcher shop, and his nephews Joseph and Paul Rice had made up for lost time and polished off a few dozen oysters before I arrived.

With a quick glance at the menu, I put in my order and we started to talk about airline miseries and what was in store for the rest of the trip. Before we could finish the finer points of Delta’s service level, our salads arrived. 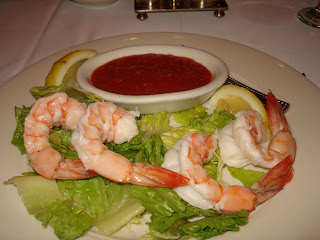 I had substituted a shrimp cocktail for my salad, just because I was feeling extra healthy. These were every meaty shrimp and had that snap that are so hard to find with gulf shrimp. A real bonus was the cocktail sauce; with plenty of spice, I had no need to add extra horseradish, a real rarity.

Before we could even finish our “salads”, our entrees were on a cart and at our table.
Not seeing my favorite bone-in ribeye on the menu, I had decided to go with a prime sirloin steak. 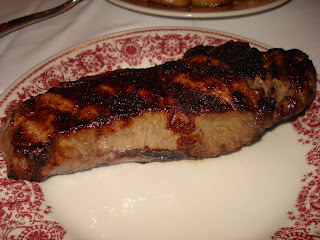 Having asked for between medium-rare & medium, I was a little iffy on the color of the steak. 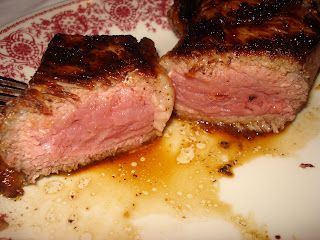 But judging by the ever scarce wait staff and the proximity to midnight, I soldiered on. Thankfully, the steak was a tasty specimen with a well seared crust and a creamy interior.

The majority of this style steakhouse serves their entrees a la carte and Sparks was no exception. Luckily Paul had some foresight and ordered a couple of sides. The only one I really tried was the mushroom caps. 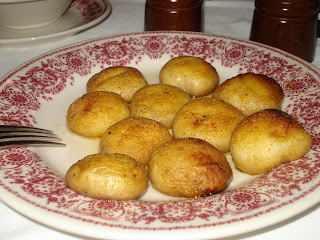 These may look like benign little mushrooms, but they were literally swimming in searing hot oil that was ready to stain your shirt and burn your mouth. Still, like the steaks, these mushrooms were simply seasoned and quite tasty.

Since the wait staff had spent so much time rushing us out of the restaurant, I was surprised when they actually offered us the dessert menu. Normally I would skip dessert, but I was convinced that we all needed to try the family style dessert. 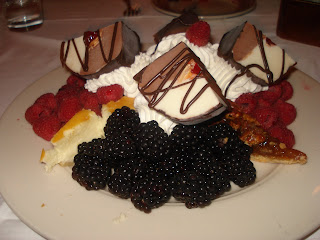 I’m not sure what family they had in mind with this dessert, but what a dish! Not only did we have slices of cheesecake and pecan pie, there were an abundance of raspberries and blackberries with plenty of whipped cream. On top of all this sugary goodness was a tartuffi, a ball of chocolate and vanilla ice cream that has a chocolate shell, split in four. All in all, it was an outrageous, delicious dessert, and at only $15 a person, probably the best bargain in the restaurant.

Even though Sparks had the makings of a classic steakhouse, I was put off by the curt, and often times nonexistent service. While the food was quite good, I don’t believe it was worth the $500+ bill. I’ll cross Sparks off my list of places to visit in New York, instead I’ll look forward to my next dinner at Peter Luger.

I find Sparks Steak House to be a phenomenal restaurant, with an attentive staff and absolutely simple, and delicious food.
This is my #1 restaurant in NYC and I will continue to refer my friends, family and clients to this place. Also, the wine list is brilliant!
Not been disappointed yet.

Yeah Luger is okay but Sparks is top notch.

Certainly wouldn't take a date to Luger to impress her!

I really love this steak, I am so hungry to eat them, and I have no doubt that I am going to be completed easily with this wonderful plate. Buy Viagra Viagra