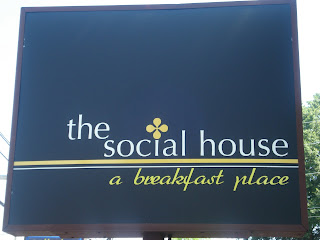 Breakfast is always a tough choice, particularly when you’re trying to find a place that’s on the way to the airport. Thankfully The Social House on Howell Mill Road fit the bill for both requirements.

I’m glad to see there is some truth in advertising. On their website, the Social House described its interior as bright, cheerful, and classic. I’m not sure I would have used those exact three adjectives, but they got pretty damn close.

After a few minutes of wrestling with the menu, with the help of the waitress I put my order in for a nice variety of dishes. The first to arrive was an order of the biscuits and sawmill sausage gravy. 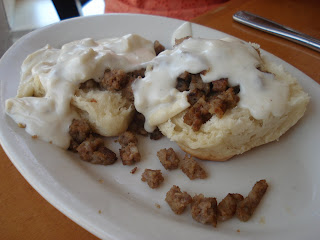 Like any sane human, I’m a fan of sausage and gravy. Although I was a little surprised to see the sausage separate from the gravy. Every time I’ve made sawmill gravy, it all gets thrown together. Anyway, the biscuits were nice and flaky, and the sausage had a good porky flavor to it. It didn’t have the usual kick like the kind I use at home, but when mixed with the milk gravy, you had a pretty solid package.

As soon as I had the menu, I knew exactly what I had to try. 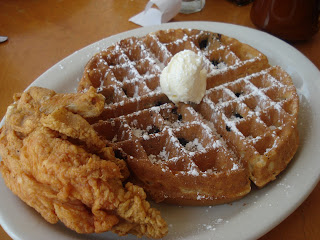 Chicken and waffles is something I’ve known about for years, but never really took the time to try. The waitress assured me this one was one of their most popular dishes. It’s an attractive proposition; mixing a well fried piece of savory chicken with a sweet blueberry waffle, what could possibly go wrong. 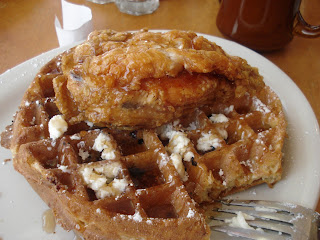 Soon enough, I had the chicken on my buttered waffle and everything covered in a nice helping of syrup. This is a coronary dream…..or nightmare. Before I made the concoction, I tried the waffle and chicken individually. The waffle was an above average specimen and it was helped by a nice dusting of powdered sugar. Unfortunately, the chicken wasn’t as good. In face the chicken was a dry and more than a little bland. 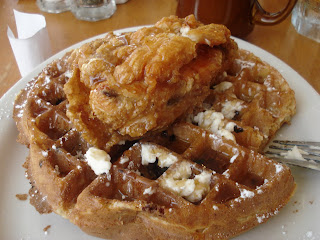 Moving onto the combination, the first bite of chicken and waffles soaped in syrup is odd but quite nice. Remembering that Alton Brown recommended adding a little hot sauce, I a test section a few good shots of Tabasco. This is what I was looking for. It’s a myriad of flavors and textures. You have the sweet working with the spicy and the soft waffle going hand in hand with the crunchy. Oddly enough, I kept wondering how much better this would be with Mr. D’s chicken from the Lorman country store.

In addition to the chicken and waffles, I thought a side of turkey sausage would be worth a try. 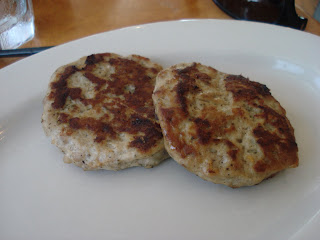 Even though this was well caramelized and well cooked, these little patties of turkey sausage just go to show there is no substitution for pork.

Last but not least, I got a chance to try the other popular brunch dish: shrimp and grits. This was a fine representation of the classic combination of shrimp and grits. The grits were delightfully creamy and well cooked, just like the shrimp. The bell peppers were pleasantly crisp, but the whole dish left me looking for more heat. Why are restaurants in Atlanta so afraid of a little heat?

Wrapping up my breakfast at the Social House, I was glad to have found another breakfast spot in Atlanta. Sure there were a few shortcomings like the dry chicken breast and the shrimp & grits that was lacking any heat, but for the most part I was extremely pleased with the Social House. It’s a pleasant place to eat, the staff is courteous and eager to please, and their building says it best. 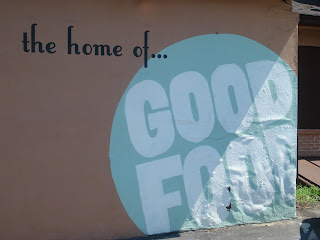