I was heading to New York in the morning, but I was in Atlanta for now, and as always, looking for dinner. Luckily, my near indispensable sister had a new place for us to try: Shoya Izakaya. With her first description, my sister painted a picture of a Japanese version of Korean bbq. We were all a little confused, and after some lively debate about what Izakaya actually means, we turned to Wikipedia for the answer. Apparently, an izakaya is a watering hole that serves food to accompany the drinks. So, with that enlightening description in mind, we made our way to the Buford Highway area.

Located in a strip mall with a soon to open Super H Mart, Shoya seems to be the only thing even in business in the mall. However, with a full parking lot in front, Shoya seemed to be doing pretty well for itself.

Once we were seated, we had a chance to look at the voluminous menu. With more than 100 items to choose from, we started off small. 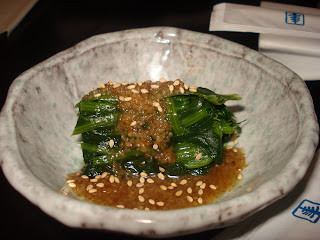 The gomaae is a small helping of organic baby spinach with sweet sesame sauce. It seemed like a peculiar combination at first, but soon enough I became a fan of the contrasting textures and flavors. The sweet sesame did an excellent job complimenting the slightly bitter spinach.

What would be a meal at a Japanese restaurant without edamame? 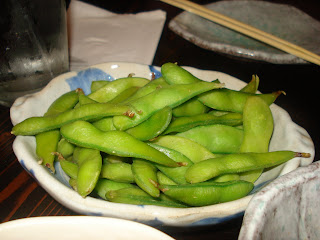 The soybeans at Shoya were on par with most others I’ve had, I just wish they had something besides plain table salt to go with them.

Next, Aaron and I led the charge and ordered a nice sampling of Shoya’s kushiyaki 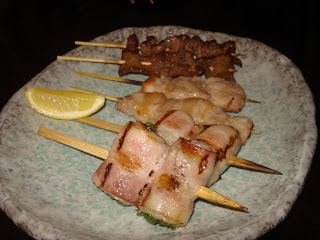 I had to look up the meaning of kushiyaki and was underwhelmed to find that it essentially means skewered meat. Here, we have the asparagus and bacon skewer first, then the pork belly, and lastly the beef tongue skewer. We opted to have them all grilled with salt instead of slathered in teriyaki. 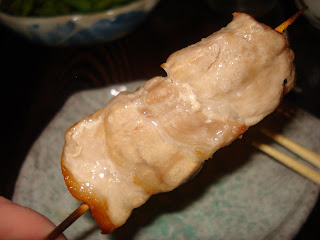 I first tried the pork belly, and it was moist and delicious. It did seem a little salty at first but I realized that the salt helped the pork flavor shine through. The bacon and asparagus skewer was a let down from the pork belly skewer. While the belly had been lean and perfectly cooked, the bacon seemed undercooked and too fatty. Still, the asparagus was crispy and it was overall a nice dish. Last but not least was the beef tongue skewer. Like all tongue dishes, this was one a little chewy at first, but overall it was delicious.

Like edamame, I immediately think of gyoza when I enter a Japanese restaurant. My sister is the same way, and so an order of the house gyoza was a must. 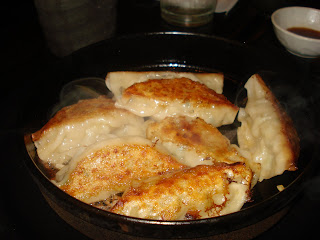 Served in a sizzling pan, these gyoza definitely had the looks, but as soon as you tried to pick them up, they fall apart. Everything was sticking to the pan, and once I managed to pry one lose, I was disappointed in what I had fought for. There’s nothing to these pork dumplings, it’s mostly the taste of green onions and maybe a little cabbage; a real letdown.

With a little urging from Aaron, I acquiesced to an order of the hamachi-kama. 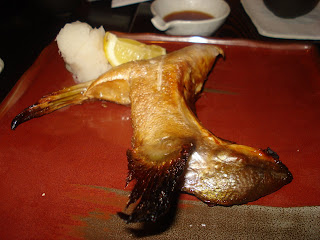 For the curious people out there, hamachi-kama is yellow-tail cheek that has been grilled with salt. I’m a little wary of yellow-tail cheeks after my first experience turned out to be overly fishy, but Sakura erased all my fears about hamachi-kama. Each piece of meat was perfectly cooked and deliciously moist, and more than excellent when dipped in ponzu. Cooking the yellow-tail cheeks in salt is the way to go.

Next in the seemingly never ending cavalcade of dishes at Shoya is the crunchy soft shell crab. 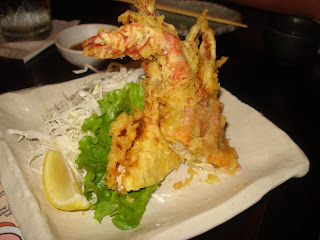 Taking a piece for myself, I noticed the batter was abnormally thick for a fried soft shell. Thick batter or no, the cooks at Shoya know their business as this was a well cooked crab.

It would be a shame to visit a Japanese restaurant and not enjoy at least one sushi roll. So Aaron ordered a supercrunch roll for the table. 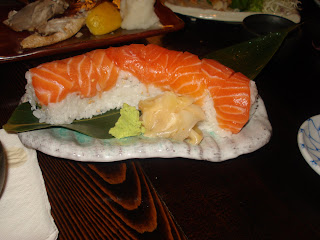 It’s obvious that the supercrunch roll is topped with smoked salmon, but inside you have tempura crunchy mix, masago, mayo and chili oil. 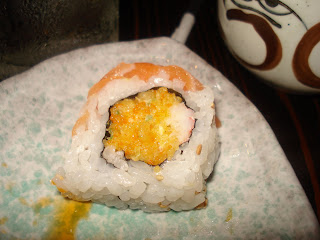 Aaron made a fine choice as this was a tasty roll. The mixture inside the roll was the perfect complement to the distinct taste of smoked salmon.

Getting borderline ridiculous, I insisted that we keep ordering different things. 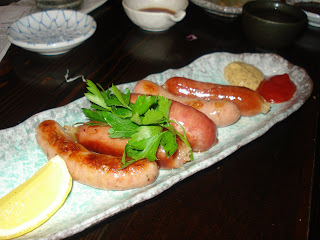 Aptly named the assorted sausage plate, this dish features a variety of Japanese and American sausages and “more”. I tried to have the waitress explain the different types, but she deferred to the manager. Shortly after, the manager swung by our table and went to describe how one sausage was called black pork, and one was a pig that was fed blueberries. It was all well and good until I asked him which sausage was which. He said that he would need to ask the owner. Worried that the sausages would be cold, I thanked him for the effort. 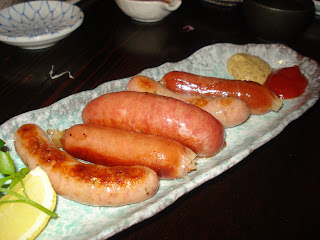 Thankfully, each sausage was cooked extremely well, and had a delightful snap to the casing. We all agreed that the mustard was well suited for the sausages, but we were all confused why they were served with ketchup as well.

Hoping for a misprint and something outlandish, I goaded Aaron into trying the chicken ball kushiyaki with me. 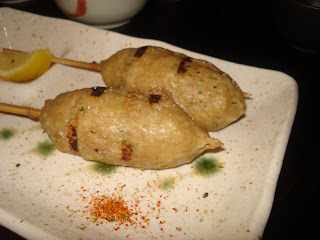 Unfortunately, it was not rooster testicles, but simply balls of grilled chicken meat. Fortunately the chicken balls were very good and reminded me of a Japanese version of chicken kofte kabobs.

Nearing the end of the meal, Aaron put in an order for the crab croquettes. 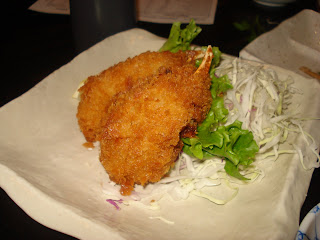 The croquettes were deep fried crab and cream sauce that had been dipped in panko flour and then served with a jar of sweet sauce. 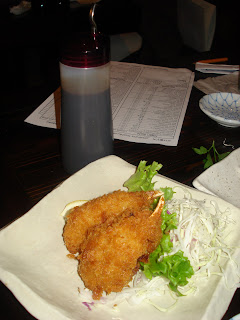 I was amazed at the perfect crust and crunch on these croquettes, but I was even more amazed to find the interior to be practically liquid. Once I got past the surprising combination of textures, I really enjoyed the crab croquettes.

Making up for her excellent choice for dinner, Jennifer picked a real dog to finish the meal. 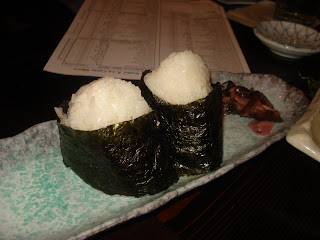 Called an onigiri, the menu describes it as a rice ball with grilled salmon. I expected to have a little rice with a generous portion of salmon in the middle. Instead it was a huge glob of rice with scarcely a ¼ teaspoon of salmon paste in the middle. Sure it was filling, but I was extremely disappointed.

Closing in on a 3 hour meal, we quickly dealt with the messy business of the check. Therein was the biggest shock of the evening. All this food and two orders of sake came to less than $100. We all took turns looking to see if something had been left of the bill, but it was all there.

Taking to my duty of rolling Aaron and Jennifer out the door, we all agreed this had been a superb choice for dinner. There’s so much variety to the menu that it would take a week of meals to sample everything, and what value for money. I’m glad to see that Atlanta now has a superb, easy on the wallet Japanese restaurant.

"Getting borderline ridiculous, I insisted that we keep ordering different things."

At least they didn't move us to a different table to accomodate the gratuitous amount of food that we ordered.

I have to read your blog to remember everything that we ate after having dinner with you. For example, I had completely forgotten about the beef tongue, but I am pleased know that I most likely enjoyed it based on your description.

I am really curious to flavor all this delicious meals that we have here, I think sausage is very good and really one of my favorites dishes. Buy Viagra Viagra