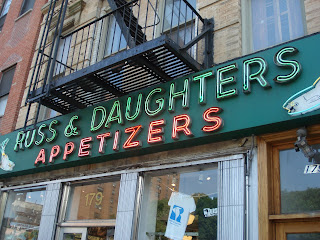 Even though they’ve been in business since 1914, I was unaware of Russ & Daughters until Bourdain put it on his list of “13 Places to Eat before You Die”. Of that list, four are in New York: Le Bernadin, Per Se (Shared with the French Laundry in Napa), Katz Deli, and Russ & Daughters. On my last day in New York, I was able to get a sandwich from Russ & Daughters. 3 of 4 on one trip isn’t too shabby.

Known for their fish, walking into Russ & Daughter’s is a real treat for the seafood lover. 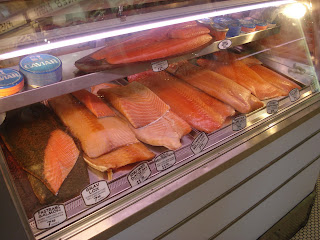 One section of their case is nothing but various types of smoked salmon. That’s the first time I had ever seen salmon pastrami.

Not the best picture, but you see some of their varieties of house made cream cheese. 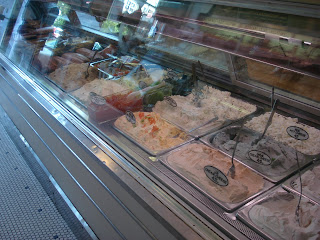 Also at the end are a wide selection of smoked whole fish. 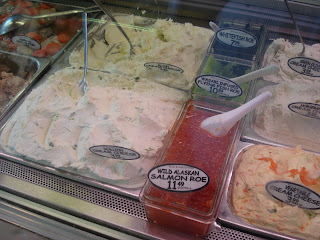 Even more fish, spreads and other delicacies. 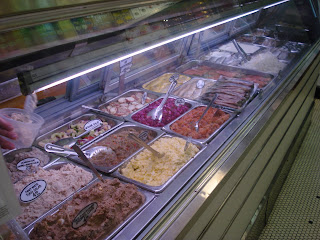 Opposite the refrigerated cases of fish, spreads, and caviar, is their container of chocolates. 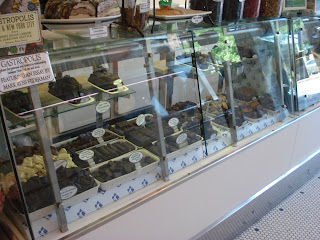 You wouldn’t normally think of specializing in fish and chocolates, but apparently Russ & Daughter’s is doing something right.

After my subpar lunch at Balthazar, I needed a little something else for lunch. 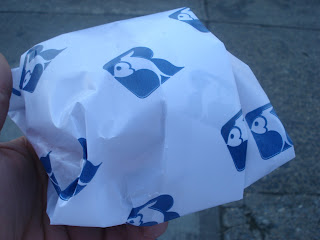 Luckily R&D was more than happy to help.

I had wanted to get a taste of what Russ & Daughters does best, so this is Gaspe Nova smoked salmon with plain cream cheese on an everything bagel. 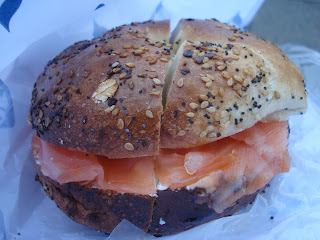 With my first two Bourdain recommendations, I had come away beaming, so I had high hopes for this sandwich. 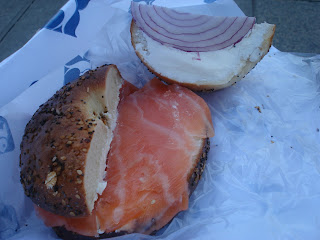 Thankfully, the first few bites erased all doubts. The bagel was thick, doughy and honestly the best everything bagel I’ve ever had. The cream cheese was rich and creamy, and I normally stay away from smoked salmon or salmon in general, but I was in love with this tender, delicate, and simply delicious salmon.

Seconds later, I was left with an empty wrapper and full stomach. It’s not often that you can walk away from a meal completely satisfied but Russ & Daughters and their sandwich left me just that. Once again, Bourdain had spoken the truth. Sure the guy may be annoyingly thin for someone who lives a life of food, but it’s apparent that he knows what’s good to eat. I really should stick to advice from Bourdain and leave the schmucks at the Food Network to choose the next Food Network drama star.