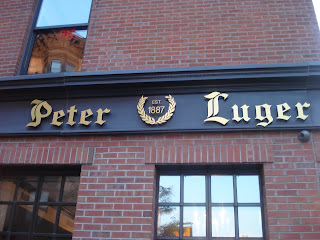 Peter Luger is a name spoken in reverence in the realm of the steak lover. Having garnered the award for best steak in New York for 26 years on the trot, it’s a veritable Mecca of meat. After a two year wait, I was finally going back.

After catching a cab to Brooklyn, the four of us made it in time for a reservation. You would think that 7:30 on a Monday wouldn’t be that busy, and you would be wrong. As soon as we walked in the door, there was a shuffling mass of people waiting for their table. Once we had checked in, I knew exactly what to do: get a drink. 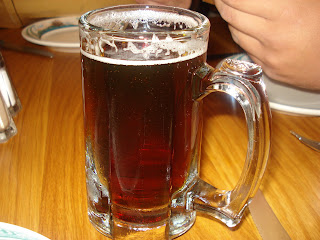 Luger’s has their own house lager and it’s pretty damn good. This was a welcome refreshment while we argued with Little Paul about why Luger is doing just fine with their cash only policy. I firmly resolved to myself that I would get a Peter Luger credit card before I come back.

A solid 20 minutes later we were shown to our table and after another solid wait, our waiter showed up with a basket of rolls and the house steak sauce. 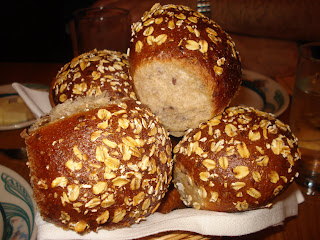 I didn’t get a chance to try these oat rolls, but I heard good things. 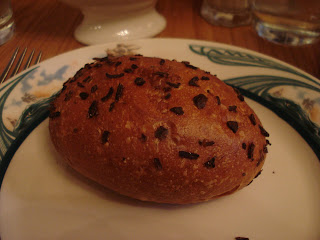 I was more interested in the onion roll. Unlike most onion rolls where the onion plays second fiddle to other spices, this roll was upfront and delicious. 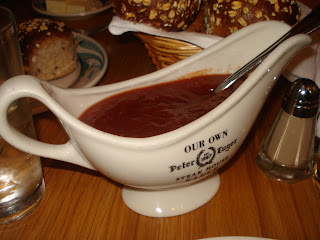 Our own crock of house steak sauce and it’s not like most. At first, it’s quite pungent with a fair amount of horseradish but it finishes with a surprising sweetness. Really it’s an amazing steak sauce. Surprisingly, Paul told me that the majority of his customers use it as a cocktail sauce.

Having grown weary of bread, butter, and steak sauce, we began to wonder aloud what had happened to our waiter. Seconds later, Mike our waiter swung by to take all our orders at once. As the ringleader of a group of voracious eaters, Paul threw out the large order and a short while later, our appetizers began to arrive. 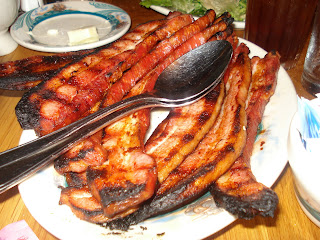 Thicker than normal bacon, and more like a rasher, the bacon is a little recognized delicacy at Luger’s. I remember the first time I had it, I thought it was the best bacon I had ever enjoyed. This time I was a little disappointed to see the bacon burned around the edges. In fact the taste was almost ruined by the char. Still there were a few sections on each slice that were perfectly cooked and only enhanced by the liberal use of steak sauce. These strips are so thickly cut, they are like a mini ham steak. I only wish that bacon this thick was easier to find.

Man does not live by bacon alone, so Paul had ordered a few shrimp cocktails in addition to the bacon. 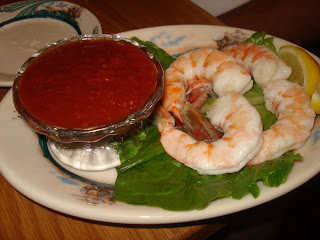 Massive, well cooked and with a wonderful snap, this was a well done shrimp cocktail. Even better, the cocktail sauce was in no need of horseradish.

After all the appetizers, it was time for the main event, steak for four. 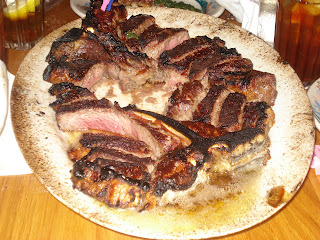 Keep in mind this picture was taken after everyone was given a serving. These are simply massive steaks. Forgetting the sheer size, the presentation is worth the wait. Without warning, your waiter rounds the corner with a gigantic platter of sizzling beef, and when that behemoth is put on your table, you can’t help but stare.

Size and presentation are all well and good, but they’re useless if the steak isn’t worth a damn. 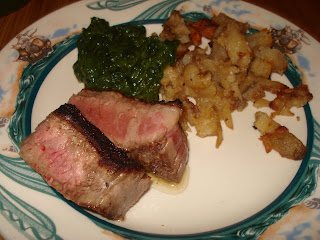 The steak had a beautiful crust, and was perfectly cooked at medium-rare, medium. There’s just one caveat. Luger’s is so dependent on the quality of their beef, and I had heard rumors that because of the increase in beef orders in Manhattan, Lugar’s just couldn’t get the numbers of high quality cuts that they wanted. I had that sinking feeling in the back of my head, and my worst fears came true. Luger’s had done everything perfectly, but this steak just seemed to be a little lacking. However, the steak was perfectly complimented by the house steak sauce and I was wondering why people even bother with some dreck like A1.

In addition to the steak, Paul had ordered a side of creamed spinach and one of fried potatoes. The spinach was creamy and rich, but I’m simply not a big fan of spinach. The potatoes were crunchy and well cooked but I found them to be a little bland.


Since Paul, Joseph, and Little Paul were heading back to Jackson in the morning, our waiter didn’t have to twist our arms to order dessert. 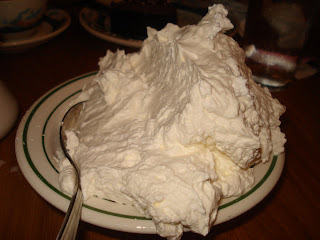 After the bacon and the steak, I was eagerly waiting for this, the homemade “schlag” or whipped cream. I’ve had whipped cream, but none like this. In fact, I believe I told Joseph and Little Paul that I want to be buried in schlag. I’m not sure what that is supposed to mean, but the schlag is to die for. 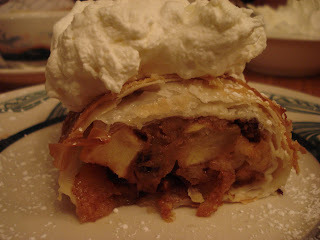 I couldn’t have all that schlag without something to put it on. At the recommendation of Mike, I ordered the apple strudel. Topped with a healthy dose of schlag, this was an amazing dessert. By itself, the dessert was worth the trip to Brooklyn. With a crisp dough and stuffed to the gills with cinnamon flavored apples, I can see why Mike recommended this dessert.

Reading this review, you might think that I didn’t have a satisfactory meal at Peter Luger. That’s not the case at all. Even though there were a few stumbles along the way, Luger’s still sells a finer steak than 90% of the steakhouses across the country. Even though it wasn’t up to my mythical first visit, I will still eat at Luger’s every time I’m in New York, and you don’t do the same, you might need to see a doctor. 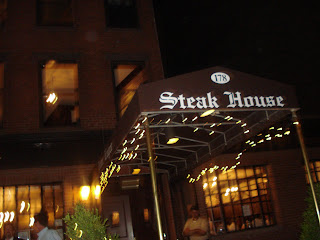 You should have sent the Bacon back. I know it's a dick move but you gotta stand up for shit like that.

True, I was actually surprised the people I was eating with didn't send it back.

You see, Frank, this is why we need to eat together more often.

I am really good to have this refreshment is so wonderful, also it looks very tasty and delicious to slide in our throats. I am thirsty.Buy Viagra Viagra